When I was little, my mom grew my hair long. It reached my bum. This made no sense as we lived on a lake and I spent 75% of my time in the summer in the water followed by an hour of shampoo and “No More Tears” detangler. (oh, there were tears too, just not from the conditioner)

But after having two boys, my mom probably enjoyed finally having a girl that she could fuss up. But as I always say: God has a sense of humor. He sent my mom a tomboy. Hated having my hair washed, hated ponytails, hated anyone fussing with my hair. HATED IT.

So I had to tamp down that inner-tomboy the other day. Albeit a little unsuccessfully. The YW has a make-up consultant. Someone that will sit down with you, apply your make-up, and advise you on how to look your best. Perfectly lovely idea.

When there was a cancellation and it turned out that I had similar skin tone and hair color as the person, I was asked if I wanted to do it. Now I’m all for looking my best but no thanks. I wear little make-up as it is. Better people than me have tried to get me to be a girly girl. I resist.

But most surprising to me was that, like the snap of your fingers, out came roaring that whirling dervish of a tomboy. I appreciated the thought but immediately all I could think of is “I don’t WANNA sit still! I don’t WANNA wear that! I don’t WANNA!” I could feel the tantrum start to rise up my spine. I was hopefully outwardly politely declining. I momentarily considered it, mostly so that the consultant didn't have her time wasted. I would like to be the grown up and cooperate. But the inner toddler took over. It was a no go.

And somewhere in the universe my mother sighed. I could sense her disappointment.

(Props to J who did it on a whim and has been looking great ever since!)

So you can thank (or curse) Michael Buble for this little flurry of postings!

Posted by Firegirl at 6:43 PM No comments:

The Sunny Side of the Street

All is right with my world. Or shall I say right-side-up?

I’ve got my truck back and I am the happiest of happy campers. I am no longer dependent upon anyone! Wooohooo! I have gas mileage! I can take the long way home and not by way of a ditch! Double Wooohooo!

I have shiny paint! My previously broken turn signal works! What more could a girl ask for?

Bring on the Snow! Not now, of course, that would be silly. But I'm ready! 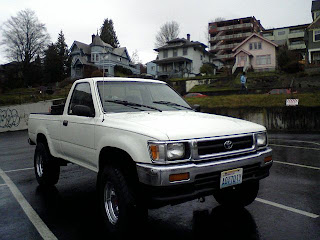 I am one of the strange creatures that love Daylight Saving Time. There’s just something about that little tweak of the clock that sets me right. I can get up easier in the morning, I can stay up later at night, and I don’t drag myself through the 2:00 pm doldrums. Life is good.

It could be that we’re in the land of rainy days and rainy nights. It could be that I’ve convinced myself that I like it. It could be my inner rebel loving to change time arbitrarily. Who knows? I just know that I feel, dare-I-say PEPPY!?!?!

Posted by Firegirl at 6:26 PM No comments: