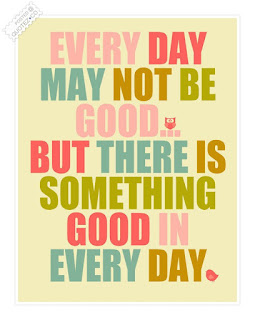 I try not to say that I've had a bad day.  Because unless someone died or my house burned down, it is just a day with bad moments.

But man, oh man, has the universe been testing my patience and Serenity NOW!  Work has been challenging, Kevin just finished a nine day state job that had him leaving at 5 in morning and not getting home until 730 in the evening.  It just feels like everything is extra strength challenging right now.

I did look it up because: nerd,  and Mercury is in retrograde this week and there as one of those super full moon episodes.  You can't work in social services and not believe, even just a little, in that stuff.  It's also the end of summer when many folks are cranky.

So, the prescription for self care is watching Elementary and Doctor Who, listening to podcasts at work so that I don't use my hands instead of my words, I'm trying to eat gawddamned bananas to boost my system and I effing hate bananas. I'm trying to focus that my summer break is next week and that Kevin will be home too, for the first time ever.

But in the meanwhile, if you hear me muttering "only bad moments..." Basically, just run.

So, bad moments, not bad days.  But those moments are starting to add up.
Posted by Surely at 5:07 PM No comments: 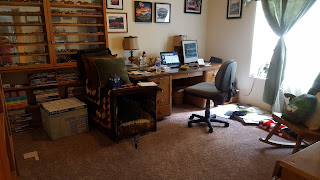 This is your mind on ADD.  I came into the office to work on a project and this is what has happened.

I took down one picture that was from my office two jobs ago and replaced it with one of the racecar.  Now I have to decide what I want to do with this picture.  So, it is propped on the lamp, which I'm certain the lamp appreciates.

Then I decided that I was going to make a collage of the racecar with an old frame and a stack of old photos from the track photographer.  The paper on the floor is because I wanted to make some sort of  a mat for the collage.  The paper in the far left corner on the floor is Lucy "helping" me.

So, now there are also stacks of papers on the desk.  I knew I had put some photos in one of the drawers, where I also store bills that are pending or need to be filed.  Clearly, I've not done this in a little while.

Then I realized that I forgot to eat lunch.  Yes, I am that human being who forgets to eat.

All the while, I'm thinking that I have time to go get groceries before Kevin gets home and then I don't have to do it during the weekend.

Meanwhile, I started writing this, started putting things away, then realized that I hadn't scanned three photos that I had, then I sat down to do it and here we are.

Posted by Surely at 8:14 PM No comments:

The grocery store in the city where I work had remodeled right around the time that I left my old job, nearly two years ago. I hate the new layout so much that I will drive south to into the next county to shop at the not-remodeled one.

This is the first grocery store I used when we moved up here in 1991 and I began working in this city.  So, my attachment to it is deep.  This is also an example of First World Problems.

As I've mentioned, I work in a university city.  August - May there are a ton of college kids everywhere.  Here's the thing about shopping with college kids: a) they shop in packs. b) because this is often the first time they've been away from home, shopping etiquette is not a thing for them.         c) they whole-heartedly believe they are the funniest people who ever lived and would like you to know this too.  (I might say here that it is a very liberal university.  Maybe it's different elsewhere, maybe the kids are better behaved elsewhere...hello, ninety year old woman here)

This is not the #1 reason I detest this store though.  I know, it's been mentioned that I have perhaps have given this way too much thought.  These are the kinds of things that ruin my life though.  Welcome to my brain.

The aisles are staggered.  There is no straight-through from the back of the store to the exit.  Now, I've been in a store when the power went out and also when the fire alarm sounded.  You want a clear pathway when this happens.  I don't want to dance with four other carts trying to cross to the other aisle.  Liken it to trying to cross a four-lane highway, it's just not a good idea.

But no, in their marketing genius brains, they have staggered lanes.  As in, the cereal aisle ends in the middle and to continue down the remainder of the aisle a) you can't and 2) you have to jog four steps to the right or left to continue down another aisle.  Traffic Jam Central.

AND (of course I'm not done, silly)  They've created little pockets, like little mini stores within the store.  The meat department is tucked into one corner but also stretches along the wall.  The bakery is jammed between the meat department and the deli.  There is a huge wine and alcohol section unto itself, complete with wine tasting bar.  The produce is in it's own little crowded area.  The dairy?  Well, let me tell you about the dairy section.  It goes all the way along the back of the store with refrigerated sections down the middle of the aisle.  So, if you want cheese, it's on one end of the store.  Want milk? it's on the other end. Sucks to be you.

Oh, and every other store in the universe groups cleaners and paper products in the same general area.  Nope, not this store. This store is a rebel!  Cleaners are next to the pet food, then it's the freezer section and then it's paper products.  So, even the aisles aren't grouped in a regular fashion.

I recognize that my brain depends on things being the same.  I don't pay close enough attention often to deal with changes like these.  As we learned when Kevin was grocery shopping, I can tell you that the rice is in an orange box at my eye level.  Brand name or flavor?  Psssh, who needs that.  But I don't feel like I'm asking for an unreasonable thing here.

I have forced myself to shop there.  Forced myself to adapt and deal.  And...no.  There isn't a quick trip into the store.  You have to wander the entire store to get the three different items you need.  I will spend $10 more at the high-end grocery store or go without instead.

The other shopping options are Whole Foods and Trader Joes, (hello, super liberal city), Safeway - which is more expensive than the store I hate, and Costco.  Oh, and Winco.  The last two stores are shop first thing in the morning or last thing at night stores.  That's exhausting, and no.  I rarely need a 55 gallon drum of detergent.

Moreover, it is a safety thing with me.  I don't feel safe in the store if something awful were to happen. The exits are not clearly marked or accessible. I don't understand how any public safety official is okay with this store design.

Heaven help us all if the store in the next county adapts this floor plan.

Posted by Surely at 1:20 PM No comments: