Proof My Life is a Sitcom

So, hmm, what's been happening here lately?  I will give you two vignettes:

Last week my father-in-law broke his ankle.  So for those of you keeping score at home, three out of six adults in this family have broken their ankle.  Do not move here or visit even.  We have issues.

After Kevin got home that night, he phoned next door to see what the doctor said.  Kevin said his dad said "Well, it's a fracture."
Kevin said "So it was broken."
Kevin's dad corrected him "No, it's a FRACTURE."
His mother can be heard in the background "Dear, it's BROKEN."
"No it's a FRACTURE"
"No, it's BROKEN.  They said  BROKE."
"It's a fracture."

Repeat this for the next three days.

I could hear this from Kevin's phone and I had to walk away.  Hours later, I asked Kevin..."They, umm, know that it's the same thing, right?"
"I'm not sure they do."

He kept walking on his fractured ankle because "It doesn't hurt."  He unwrapped his entire soft-case because it was too tight.  They called us at 8:45 to have me come wrap it back up because they couldn't figure out how to do it.  When they gave him a boot, he continued to take it off because it was uncomfortable.

Finally, after being threatened with surgery, he is now staying off of it. To the other end of the spectrum.  He doesn't get up now.  His mom has been taking care of them.  As we learned when Kevin's mom was in the hospital, accepting help is not something they are willing to do.

So, yeah.  I've adjusted my schedule a bit so that there is someone around if things go sideways. That is the shiny side.

Fast forward about a week...Kevin's uncle, my father-in-law's older brother, has come to visit.  Because why not?

We had dinner as a family today.  KFC, because my sister-in-law is Up To HERE with everything right now.  She never is grumpy or gets rattled but she has HAD IT.

Our uncle brought a video to watch.  A VHS video.  From 2005.  Of their vacation in Mexico.

Do you remember the camcorder days?  Total crap sound, unsteady camera to point of seasickness, and it really shows how people of this generation have become Spielbergs  with their phones.  Nothing makes a person appreciate cell phone cameras like old VHS tapes.

The first five minutes was looking over the dash while hearing nothing but the rattling of the motorhome in the background.  Then it switched to five minutes of looking at the courtyard of the condos.  I know you think it can't get any better and it doesn't.

Someone noticed the contractors building some condos.  The soundtrack is a jackhammer then accompanied by a cement mixer.  This was so interesting that we watched thirty minutes of it.

"Because you see, he lifts those buckets. They weigh 75 pounds.  Watch! He lifts it one handed, and he runs. I tell you, he runs.  And he never stops!!"  For thirty minutes.  "And that guy, look at that guy.  He takes a bucket full of concrete and lifts it up to the other guy."

About halfway through, Kevin looks at me and whispers "Effing kill me."

That's what's happening here.  What's going on with you?

Too Many Things to Do. Oh, the Internet is Calling!

I am having one of those If You Give A Mouse A Cookie mornings.  It's President's Day so I have the day off and I have things to do that I specifically planned for today.  And then I fell asleep on the couch.

It's pouring rain outside so a certain furry creature can't go outside for too long, even though she would love for me to hold open the door endlessly so she can consider her choices.  Like a desperate parent, I just gave her a bone hoping that it would entertain her.  She is currently under my leg stealing paper out of the wastepaper basket.

I left cleaning the floor to be done today because it really is pointless to do it on Saturday, just to have a cute boy and his dog go across it eleventy hundred times.  It's one of my least favorite chores though so I'm ignoring it.

Here is a photo of my office in it's current state: 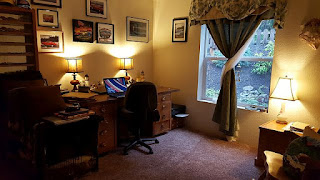 You can't see the cereal I haven't eaten yet.  Or the imaginary coffee I'm thinking about going to get as "motivation".  You can see the stack of photo albums, I've added five since Saturday because me = glutton for punishment.  There's also a dinosaur laptop that I like to write with but has about .05% memory left.  And my newish laptop that of course needed to update this morning.  My new headphones that I want to test out today.  My dead tablet that I have to decide what I'm going to do with because I bought a new one.

You also can't see my computer glasses which are all the way in the other room but the dog has decided to sleep next to me now.  If I move, she'll wake and want entertaining again.  But this has me squinting and hunching over, which is not a good look nor comfortable. 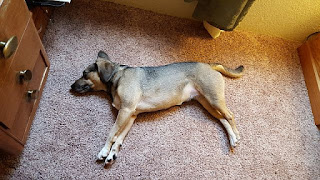 To add insult to injury, I know I'm forgetting something. This makes a tiny squeaky noise in my brain but not loud enough to tell me WTH I'm forgetting.  So, that's nice.

My phone just alerted me that the lovely Swistle has posted, which means I will go read what she is up to.  As it's titled Frustrating Morning, I'm going to guess we're having similar mornings.  And, this reminds me I didn't comment the other day like I intended so I need to do that.  Maybe that's the squeaky noise.

The main project today is scanning and printing photo copies for my cousins.  My mom pulled a Kevin's Mom and brought out four more albums, three of which are from my grandparents that I've never seen before.  So, TREASURE! but also, More Work!

I also promised my mom to work on the Ancestry project today.  I think I am going to go get coffee. Besides, she's awake now: 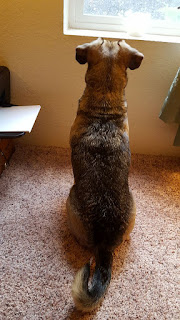