Look at This Photograph

Leftover from the painting project is an issue.
There is a big collage frame that I'm not going to put back up because the frame is aged and more to the issue: I'm kind of over the photos. The condition of the frame is not the thing but this is: the collage has much older photos of my family and I'm feeling Meh about putting them back up.
I mean, I get that the point of having a photo wall(s) is to have a visual representation of your life history.
But what if it's not a history you necessarily want to see?
Because they don't feel like my family.  I can look at the girls or Little Nephew and feel happy.  Seeing photos of my parents or brothers, however, I've realized just makes me anxious or sad.
If we do math, I have been a Jones (not my surname) for almost thirty years.  I have only been a Smith (not my maiden name) for nineteen years, many of which I don't remember and some of which, I don't want to.  I has Satan's surname for less than two years so it doesn't count on a variety of levels.
So, anyway.  Some visual context: the main wall everyone sees has photos of Kevin & I, the fam, racecar, truck, and puppy.  There is a photo of Little Nephew and another of the girls, otherwise my family is not represented on that wall.
On the opposite wall by my office, there are some photos of my family and other photos like what's on the main wall. A mixture of current-ish and older ones.  I have photos of my grandparents when they were young, because seeing them does make me happy. However, I haven't hung my brother's wedding portrait up yet.  (and I love my sister-in-law)
You might be wondering: no, my family does not come to our house.  We stopped inviting them to an annual barbecue because they didn't ever come.  I don't have them up for the holidays because our house is tiny and not made for entertaining.  So, it's not like they're going to be here, look at the walls, and notice that they are not represented.
If I were to channel Marie Kondo, this collage does not spark joy so leave it down.  But then what do I do with it?  Change the photos, and/or have Kevin paint the frame. Or store it in Monica's Closet, or rehang it.  Too many options for my busy brain so here we are.
And then as I was browsing the thousands of photos on my phone (not exaggerating) I realized that I can put our friends photos on the walls. Tah Dah! Problem solved! I like our friends. I have photos of them! They don't make me anxious or sad.
I am going to pick my favorites (photos...and yeah friends, lol), order prints and put them into the frame instead.  Because they do make me happy and they are good memories.
Painting is just so complicated, who knew?  Lol.
Posted by Surely at 1:24 PM 2 comments:

See, I told you I'd tell you this story.  Sometimes I do actually follow through.
We spent two weekends painting the shop.  I thought it would take a weekend but I was super wrong.  This is not unusual as I historically underestimate how long things actually take.  Also, I did not anticipate that Kevin would have many of the same habits/coping techniques that I would.  It's fun working with someone just like yourself *shaking my head*
First, some details:
It's only a one car garage that has been built by Kevin and his dad, in phases, over thirty years.  It is super nothing fancy.  We did the exterior two summers ago and was way overdue for the interior.
It's never been completed, meaning the walls were never taped and spackled or textured.  Never sealed up at the floor or ceiling.  Never properly trimmed around doors and windows.  The wallboard is tan, not only because it has aged but because when it was installed it was not grey/white like wallboard is now.
That being said, we still didn't tape, spackle, or any of those kind of words.  We did do a goodly amount of drywall repair with paint this weekend.  And well placed shelving and posters.
It turned out pretty cool, if I do say so myself.  The wall above his workbench still needs finished and Kevin is doing the ceiling because I'm super, extra, not doing it.  Next is the floor, which is under debate; whether to do paint or garage tile.  I have a feeling this will be a while though.  Like another tens of years.  Especially since we were so careful when we started not to drip paint then by the end of the project was all "Oh, it's just a shop floor."
Two side-notes about this project: I told Kevin that I would immediately, without warning, take his brother to the dirt if he commented negatively in any way.  Today was the day and I'm pleased(?) to say that I was the grownup and ignored him.  He chose a random untouched piece of wood trim on the ceiling to ask about. Not the cool paint scheme, not the newly installed trim, the windows. Nope, a random piece of trim on the ceiling.
AND, I have a bet with Kevin that he has his wife paint his garage the exact same way.  Because he feeds the green-eyed-monster on the regular.  If Kevin does it, he has to do it.
I am not scared of spiders.  Usually I will let them be, unless they are in the house.  If they are in the house, it wavers between catch and release and burial at sea.  Well, we live in the woods and this is an old shop.  Kevin did a good job at keeping spiders at bay but the webs are a whole other topic.  There are now a few that are a permanent part of the wall texture.
There is a heater in the shop that has trim around it.  However, the trim for the floor would not fit under it.  So this resulted in me laying on my belly on the concrete floor and painting underneath.  This was one of those me muttering "No other wife would do this for their husband" moments.  Kevin agreed but then also wondered if he should take a photo "Because isn't that the kind of thing you post on social media?"  He was joking but there was enough seriousness that I hurried to finish.
I learned what it is like to paint with me because Kevin has similar habits.  Clutter spins him out and the need to put things back as soon as possible is great in him.  Or, sometimes he'd get frustrated and things would pile up.  This is where I am triggered and going around throwing things away, putting away tools, etc. just so I could focus.
At one point, he reached The Frustration Level.  I am very familiar with the level, see Sandy Wall that Remains Unfinished.  I was able to talk him down by explaining that he was just at the This Is Never Getting Finished stage.  He said something like How do you know? And I muttered "Because.I.Have.Painted.The.Entire.Inside.Of.The.House."  He was quiet after that. Hmmm.
Finally, I have to say that painting with black paint is SO SATISFYING.  I was in my Happy Place for sure.  I was actually thinking of more things that I could paint black. 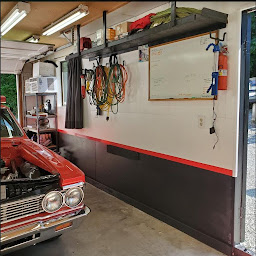 It's been so long that we can't remember which
puppy chewed the edge of the door
Posted by Surely at 6:03 PM No comments: