Friends IRL may have noticed that I have taken a little break from social media.  Mostly from the facebook because it's depressing to learn and continually experience that friends and family are racists and willfully ignorant.

I define willfully ignorant as someone who blindly accepts facts as truth, no matter the source.  i.e. "my coworker said"  "I read it on Twitter" or Fox "news".
Take some responsibility and confirm something is true before spreading it around.  It takes less than a minute to google something.

And the racist thing, well, that just sucks because there isn't a cure for that other than intolerance.  Which is difficult to do when it's family members or friends you thought you knew.

There are many worst parts for the past few years but for me the worst part is discovering which friends/family have these beliefs.  It's disappointing and exhausting and leaves me feeling powerless.

Because all I want to do is hit comment and point out that it is a lie or state how disappointed I am.  But that is a can of worms that I do not want.  Instead I will like the snot out of posts that I do agree with, knowing that they'll possibly pop up on others feeds. It's passive aggressive but it makes me feel a little better.

And sometimes I will post something and know that there may be blowback.  My plan in that case is to not feed that monster and ignore any comments.  Luckily, I've not had that happen in quite a while.

There used to be decorum but that is a social skill that has passed, it seems.  Because of my beliefs, I have been referred to as a libtard, been "pwned", and all kinds of things.  To add to the frustration, most of these folks would never say it to my face but giddily do it on social media.  I've never hidden nor shouted my beliefs but it's not difficult to know who I am so it's difficult not to take it personally.  (side-eye at close family members)

Like I've said before, this isn't a simple disagreement about the death penalty or abortion.  These are disagreements over fundamentals like every one is equal and free and taking care of the poor and the weak, and basically: don't be an asshole.
These are things that in my 50 years of life I would have never guessed would be a thing.

Instead I post puppy photos and family photos.  I repost memes.  I don't deep dive like I used to.  The only downfall of this is that I have missed stuff occasionally.  Then I think: we didn't use to have facebook and it was okay, we all survived.

My former sister-in-law lamented that there was nothing good on the facebook anymore so I suggested to recultivate her feed.  I recommended some pages for her to follow so she sees positivity instead of the utter shitshow that is our government and social media right now.

I also follow dog pages like Crusoe the Celebrity Dachshund, Dog Feelings and Dog Rates.  My f-s-i-l is a cat person so they weren't on the original list.

Follow your state/province. For example, I follow Washington State History Museum, local town(s) history, and Only in Washington.  I'm a nerd so I realize this might not be interesting to everyone.

My twitter feed is different because I use it differently.  However, I do follow writers, comedians, pundits, and friends.  I try to retweet the funny, the poignant, the important on that platform.  (Firegirl03)

My point, other than the rant, is that social media is what you make it.  It can be super negative or super positive.  And VERIFY for eff sakes before reposting.  #morepuppyphotos
Posted by Surely at 11:37 AM 1 comment:

I made the mistake of asking where the Christmas wrapping was at my mother's house. First, she looked at me slightly aghast that I didn't know, which really is a shock taken that I haven't lived there for thirty years. For all of my childhood, it was stored in a Montgomery Ward wardrobe box under their bed.  I also assumed that she would have some out because it was Christmas.

She said in the laundry room, next to the freezer.  Then proceeded to show me because she's my mother. To be more specific, it was in the closet portion of the built-in wardrobe, that was once my brothers room, and now converted into the aforementioned laundry room. Simple.

And the door only opens about five inches because: literally next to the freezer.

I reached in and grabbed the first roll my fingers landed on.  It was brittle but still new Christmas paper that I suspect was as old as I was.  It was taped down instead of cellaphane. It was not glossy like paper is now.  There was a little time whiplash upon seeing it.

Now I'm obsessed with what else is in that closet.  It will be one of those archaeological digs that will occur when it's time to close that house so it will be a while before I find out. 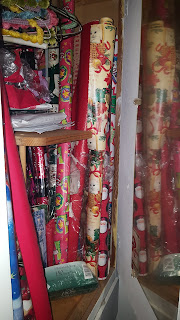 Then, there's Kevin's parents.  Every year for ten years I say "Do NOT buy Christmas wrapping. I have plenty of YOURS here at the house."  Every.Year.

Every.Year. they buy paper and I store it.  I even band it together to keep it separate even though it's obvious which is there's because she buys odd wrapping  that I would never buy.

This year I said "The wrapping paper is behind the door of Lucy's room"  Take what you need because there's plenty.  That sounds simple, yes?

About halfway through opening presents I noticed that some of my really nice birthday wrapping paper was on the presents.  I was a little confused but let it go.  Then one of the boy littles said to his brother "Bro, that looks like girl paper."

It was metallic purple and pink paper.  Couldn't be less Christmas-y paper if it tried.

SOMEHOW, my father-in-law came into the office, ignored the rolls of paper behind the door, and got into Monica's closet, which requires moving a rocking chair.  He then unearthed, on the top shelf, our box of regular wrapping paper.

AND THEN DIDN'T THINK ANYTHING WAS STRANGE about baby shower, wedding shower, children's birthdays wrapping paper.

OR, did they think to themselves "Gosh, Surely is stingy with wrapping paper."

OR  "This seems odd, maybe we have the wrong paper"

OR "Let's call Surely, who lives twenty-five feet away, and double-check.

So, now everyone's presents are going to be wrapped in Christmas paper. I don't care if your birthday is in August, you're getting freaking SNOWMAN paper because it's all I have now.

Posted by Surely at 4:05 PM No comments:

Today is January 2 and I've accomplished very little.  (it's not now but it was when I started)

There hasn't been a consistent schedule in this house since December 19th and I can *feel* it.  Even Kevin complained a little yesterday about feeling a little off.  We are a Need Structure pair.

There is a To - Do list on my phone for these last three weekdays of Winter Break.  Some of them are easy, like set a doctor appointment, and some are difficult, like paint the laundry room.  I've accomplished not one single thing and it's after 1:00 p.m.

This kind of procrastination isn't unusual for me.  Although, I am taking today as more of a mental health day than a lazy day.  And I completely understand that I will be frustrated with myself tomorrow or Friday for squandering this time.  But this is the first day that I've been alone in four days and I can feel it.

I will gladly admit that our Christmas Tree is still up and decorated.  Kevin would like to have it down the day after Christmas but I usually wait until closer to the New Year.  This is the latest it has been up, for sure.

It's still smells really good, it's not dropping needles, and it still makes me happy to look at it.  I told Kevin that I'm going to add a day each time he asks if it's still up.  He just asked so I get to wait until tomorrow.  Because I am a mature adult.

January 3rd...Today is Niece and Nephew's 10th anniversary and yesterday was Nephew's 34th birthday.  We are not talking about how big those numbers are and the correlation with a birthday I had last month.  Nope, we are not.

I relented and took down the tree.  What's funny to me, although he probably wouldn't admit it, is that Kevin didn't ask about the tree yesterday.  Technically, I won.

Every year for elebenty years, I forget what a process that is.  And sad.  It actually makes me sad.  Like Phoebe on Friends, I apologized to the tree and thanked it for being such a beautiful tree.  Yes, I'm crazy and probably been home a little too long.

So, that took most of the afternoon.  Because it's not just removing ornaments and you're done.  It's vacuuming and dusting and putting furniture back and Monica's closet to contend with.

Pro tip for the post holidays blues:  small white string lights.  I've left a few sets out with regular house stuff to ward off the darkness, both physical and metaphysical.

Now it is January 4th...  I did not have the aforementioned frustration with myself but I will say that I need a nap.

I stacked all my errands for today.  Groceries, Goodwill, car wash, donating magazines, post office, stuff.  Then of course Kevin invited me to lunch and needed something picked up.  I'm not complaining that my husband wanted to go to lunch, I'm complaining that it is a half an hour south of where I was and opposite of home.

But I'm home now and all I have left on my list is painting the laundry room.  It's 3:15 so I'm going to go with a hard No on that one.  Plus it's Friday, one doesn't start painting on a Friday. That is silly talk right there.

If you got the Bare Naked Ladies reference from the title, *fist bump*

Posted by Surely at 3:36 PM No comments: