Just Give Me A Ring

I don't consider myself a possessive spouse.  I can only think of one time where I was overtly possessive.

There is a woman racer at the track whom I would gladly give a bad haircut with rusty kitchen shears.  She is a talented driver with a sketchy personal life and flirts with Kevin on the regular.  Kevin can't stand her either so I do enjoy it so when I watch her futilely try to use her wiles.

The time that sticks in my memory is when we were waiting to race, literally standing with the racecar in the stage lanes, and talking.  She walked up behind him, touched him on the shoulder (*squint*)  and asked him a question that anyone else could answer, like I was not even standing there.

It's one of the few times when I've squelched the urge to actually punch someone.  Instead, I stepped forward and put my hand on MY husband's chest, dead eyed her, and continued to talk to him.  Kevin monosylabically answered her and she wandered away.  Kevin just raised an eyebrow at me and we continued on with our lives.

The other night we were at family dinner because of course we were.  My nephew mentioned something about cell phone notifications, which lit Kevin's fuse because I'm known to miss calls and texts.   He explains to them that one of the ladies in his office has a ring she wears that vibrates when her phone rings or has notifications.  He would like to get me one.  So romantic.

I eye-rolled the idea because No One Holds Me Down and I just find the idea annoying.  In Kevin's defense, he worries when I don't answer.  It's not like I've fallen and broken my foot off my leg, or rolled a truck, or any other fantastical things that have prevented me from answering the phone.

The Nephew asked how it worked and Kevin explained that it vibrates just like your phone does.  He then explained further that he dialed her phone, held her hand, and felt it vibrate.  I reacted without thinking about it.  "You did WHAT now?"

Kevin immediately realized his error.  "It's not like that, I mean, how else would she demonstrate how it worked?"   I took my engagement ring off and slapped it on the table.  "OH, I don't know.  Maybe like THIS!?!?!"

The kids were roaring with laughter.  They knew nothing really untoward happened and they knew I wasn't truly angry and they were just enjoying the show.  It's not like he's ever given me a moment of doubt and while not his best idea ever, not a punishable offense.

But, I won't be getting one of those rings anytime soon.
Posted by Surely at 5:39 PM No comments:

Take Me To Church

I went to church today.  Friends just paused upon reading this and thought wait, what?  Sh*t must have really gone sideways.

It's not the church you're thinking of.  Up here in this corner of the universe, there is something called the Tulip Festival.  It is fields upon fields of beautiful tulips of all colors, including two businesses that feature elaborate tulip gardens.  It is not unlike walking into Oz from a black and white landscape.

The locals hate this festival because nothing defines misery like thousands of extra cars and people unfamiliar with the place; all on narrow farm roads.  It lasts about two weeks and traffic is a misery, for sure.  It's one of those situations that it's a shame the locals don't get to also appreciate the beauty, kind of like New Yorkers who never see the Empire State Building or that you get so used to your surroundings that you simply don't "see" them anymore.

This is another year that I've randomly chosen a morning to go explore.  I arrived as the gates open to ensure there is little nonsense with traffic and ugh, people.  The weather was mixed today in a typical Pacific Northwest kind of day, bipolar with a chance of rain.  These fields are on the flats so it's always windy, today was no exception.

Like a teenager, I chose my favorite music, put in my headphones,  put my hoodie up and entered into the world of the technicolor. (music choice, you ask?  it was a shuffle featuring everything from Keith Whitley to Lady Gaga to Les Miserables)

Once inside, everyone speaks in hushed tones.  The environment is something between the reverence of a church and communing with Mother Nature's best artistry.  Especially with going so early, there aren't many folks and those who are certainly aren't rambunctious.  Even little ones are quiet and it's fun to watch the absolute wonder in their expressions.  I could spend a day just doing that.

At this venue there are areas designed like English tea gardens, there are little vignettes with benches and designs and there are huge open fields of color. Not only are there tulips but lilacs, daffodils, rhododendrons, magnolias, and other flowers that I'm unable to name other than "oooh, pretty!"
It's is adjacent to a working farm so some of the paths are muddy and there is the occasional farm smell.  To me, it's the perfect juxtaposition to the beauty.  You can't get the pretty without the ugly.

I take a million photos with just my cell phone.  Others have tripods and shades and are dancing on the edge of being intrusive.  Others manage to walk through unencumbered and I marvel at their self control and apparent memory.  (Or they've forgotten their cameras. That works too.)

The workers are also quiet, almost invisibly taking care of the flowers.  I found it sweet when I noticed one taking a photo of the lilacs this morning.  Even the folks who work in this wonderland aren't immune to its beauty.

I have to believe that the people who decided how the Land of Oz looked must have experienced gardens such as these.  It is an example of how "riot of color" has come into definition.  It's a child's imagination come to life.  It is magical and it is church.


So, in researching my family history I've made some incredible discoveries.  One of the top ones being that my dad was a real and true bastard, having been conceived months prior to his parents marriage.  This gives my dark little heart joy.

Three out of four grandparents have been married three times.  Three.  That's one hopeful and stubborn group.  My grandma outlived three husbands, my granddad was widowed once, divorced once then married until his death.  My other grandma was married three times, divorced twice and died at 60 so she packed a lot in there. (also: two sons, two different fathers)   My grandma's first husband died at 24, he's the only one that truly married until death do us part.

My maternal grandmother's family was Society in Southern California.  She always kind of had that proper air to her so this isn't a surprise.  What was a surprise is that she married a bad boy.  An honest to badness bad boy: 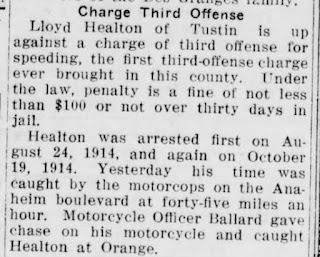 It's clear that my racing interests are genetic.

But that was her second marriage, to who turns out to be her first husband's best friend.  Her first marriage held a bit of scandal, I believe.  It sounds like an elopement:

It looks like they lived in Arizona for a while before returning home as he had a job with the railroad. But I wonder if it was also to maybe to let the scandal die down? 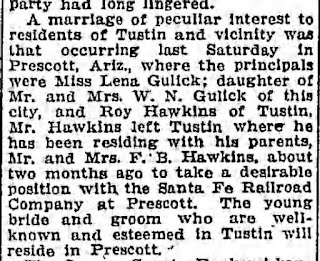 Unfortunately, I can only rely on my imagination as everyone has passed away now.  My mom was in the younger part of the family (her dad was the troublemaker) so these goings on happened before her existence.  Also, my grandma didn't seem the type to tell stories like this.  Let alone the idea of asking your mom about that one time you eloped.

Not to mention how unbelievably painful her life must have been, lost her first husband and a baby to the flu epidemic, remarried but lost him to a heart attack at a young age, to remarry again just to be widowed.

She's always been my quiet and staid grandma.  It is fascinating to think of her young, impulsive, and eloping.  It's fun to think of her marrying her late husband's wild best friend.  Then finally marrying again to a war hero who was widowed, also lost a baby and had five kids of his own. (his wife and baby died in childbirth)

Posted by Surely at 4:11 PM No comments:

A thousand years ago when I was in a high school psychology class, one of the requirements was to write a journal entry every week for that quarter.  For someone like me, that was easy peasy.  I could write you anything, just don't ask me for help with Algebra.  But for some reason that I can't recall now, I didn't do it.

If memory serves me, it was when I started doing work study so I went to school for a little bit then went to work.  I think I just forgot all about it.  Also, this was before journaling was a thing; keeping a diary was for young girls and old people, not for high schoolers.

So, I don't fail well.  I am problem-solver.  We know this.  I remember the sinking feeling of the teacher announcing that the journals were due at the end of the week and I just knew I was screwed.

I considered just faking it.  It was like twelve entries or something, certainly I could pull that together.  But that's not how I was wired then or now.  I sat down to figure it out and finally just wrote one journal entry explaining why I didn't get the assignment finished.

I wish I still had it, maybe I do.  I don't recall what I wrote but probably something along the lines of the above: work study student, short attention span (what they called ADD back then)  and asked for consideration.

Yeah, I got an "A" on that entry, which made my failure to complete an assignment "F" grade into a "C".

I don't know why I thought of this, other than a whole lotta life examination happening up in here right now.  I'm going to try to channel that tenacious, never-say-die teenager over these next few months as I try to figure out all.the.things.  I'm going to make an "F" grade into a "C".
Posted by Surely at 1:30 PM No comments: