One of the writing prompts on the list that I've sort of abandoned...I've written some, just not posted...is "Describe What's in Your Bedroom and How it Came to Be There."

At first, I giggled like a teenager because c'mon.  Then I'm like "Hmm, what's interesting about that?"  Then in the middle of the night when my brain decides it needs to sort out random thoughts and I need to be awake-ish for it, I considered it.

So let's start with the elephant in the room.  Our bed.  Well, our bed is Kevin's bed that he's had since he was married the first time.  Now, the mattress has been replaced obvs. but the frame is the same.  AND, it's a converted waterbed frame.  Sexy, lol.

I've never cared about who slept in the bed.  Especially now since it will be almost thirty years since we've been together.  But I get how that could weird someone out.  At most, it makes me giggle like a teen-aged mean girl.

One of our dressers is Kevin's grandmothers from the Moody House. (his parents house from years ago)  The other dresser and nightstands are new, inexpensive ones that we finally bought two years ago.  The lamps are also his grandmothers, very old ceramic with hand-painted bases.  We inherited them because reportedly I said I liked them at one point.

There is a set of gothic wrought iron candle holders, also from the Moody House collection, on the headboard.  I added a festive string of fairy lights last Christmas and they're still there, much to Kevin's dismay.   Books, of course because books.  I have a funky storage case/footstool kind of thing from the seventies maybe?  It has an Americana print on it and I think it's cool.  Kevin not so much.

There is also a hand-carved and decoupaged jewelry box that was his mothers from her childhood.  She said that she had found it along the railroad tracks near her house and "someone left it for her."  I'm going to go with someone stole it, took out any jewelry and tossed it.  But if she thinks someone left it for her to find, then okay. 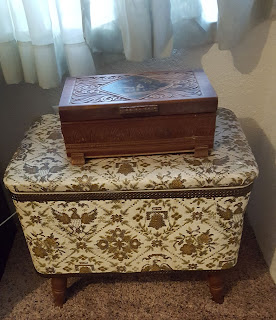 I have a wingback chair that was my grandfathers.  I love it but it's so worn that I keep a cover over it.  It used to be dark burgundy but now it's a dusty pink.  It's from the 1940's, as near as I can tell.  It was one of my favorite chairs to sit in when we visited.

The artwork on the walls is very random.  95% of which is second-hand. We have a painting that was done by a great aunt or someone on Kevin's side of the family.  We've just always had it, not because we enjoy it, just because.  It's no great work of art. In certain light, you can see the painter's signature.  I really should look it up someday.  Oh, and it's huge, three feet by foot and a half. 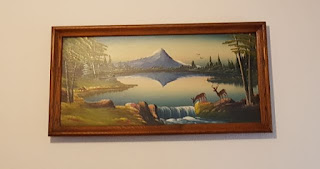 So, what I thought was a boring, random suggestion actually made me think about where our stuff came from.  Few new to us pieces, lots of inheritance, and second-hand finds.  I think it became an interesting piece to write because it is an intimate space, not like a kitchen, bathroom, or dining room.

Also, it's always good to reflect back to what used to be.  Reminds us where we came from.
Posted by Surely at 6:39 PM 1 comment: