How I Spent a Snowy Morning

It's been a snowy winter.  I don't mind the snow.  I think mostly because I have the kind of work that gets snow days.  But when I do have to drive in the snow, my drive to work is sketchy.  Curvy and hilly backroads, freeway includes a mountain pass, and even once in the city there are hills.

When this happens, I take the backroads and avoid the freeway.  This keeps the "Whohooo, I have an SUV and can go really fast in the snow because SUV!!" people away from me.  It also lets me take my time and take photos if something catches my eye.

I did just this on a recent snowy day.  It was a Friday so I was unconcerned with getting anywhere in a timely manner and I stopped for a coffee because of course I did.  Once I left the coffee stand, I turned into the left hand turn lane and waited for the light to change.  I was the first in line at a busy intersection with a long light.

Suddenly, a white truck came skidding toward me and smashed into the corner of my truck.  I saw it just in time to take my hands off the wheel and brace myself.  It didn't feel like that hard of a hit, really, but the truck wedged against mine proved otherwise.

I couldn't quite see the other driver but I could see some flailing about.  I got out of my truck and walked all the way around the one that hit me to check on the driver.  Finally, he opened the door and told me he was okay.

Of course, it was a college kid.  He was clearly frustrated and embarrassed.  So much so that his flailing kind of continued.  In a fit of pique, he slammed his door.  I was just about to turn to walk back to my vehicle because tantrums are unnecessary when I heard this quiet "Oh...no, no, no, no."

Dude locked himself out of his own truck.  In the middle of the intersection.  I BUSTED OUT laughing.  "Dude, you are not having a good day." I said aloud while thinking "And sometimes karma is instant."

He phoned his dad, because toddler, and asked him to come bring his spare keys.  He was vague as to when he would arrive so I called 911.  This was fun because they were busy and frustrated with these type of calls.  But I think I made the dispatcher's day when I explained I was calling because dude locked himself out of his truck during a tantrum.

They sent a traffic cop to monitor traffic and she was laughing at him too.  Finally, she stopped traffic so i could back up and park in a parking lot.  Before I backed away, she told dude that they had to call a tow truck to unlock and move his truck.  When he fussed about it and explained that his dad was coming to help, she told him that they would have to see who got there first.

I had to wait about thirty minutes before the tow truck won the race and got him moved out of the way.  I'd called Kevin and took photos already so all I could do was listen to the radio and drink my coffee.
Not a bad way to spend the morning but not on my top ten list, for sure.

Finally, the police arrived to take all of our information.  He wrote dude a ticket for driving too fast for conditions and while he was doing that, dude's dad finally arrived.  His dad was very attractive, calm while boiling under the surface and was kind to me.  I went to work and dude when to university to most likely fail his exams he had that day.

Photo courtesy of my work's IT guy because even though it's a city, it's a small town: 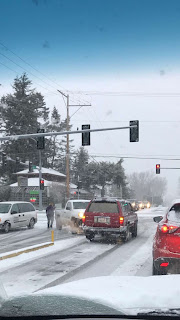 Posted by Surely at 5:41 PM No comments:

Would You Give Me Your Shoe?

I was trying to explain a person's generosity the other day. "Scott is the kind of person who if you asked him for his left shoe would give it to you. No questions asked. And with no expectation of it being returned."

This made me think of other ways to categorize people. Because this is how my brain works.

My friend Willa would do a one-minute bit about possible reasons to give you that shoe but would definitely do it.

Kevin would laugh incredulously, ask WTF you need it for, then figure out a way to not have to give you his shoe but still get you the shoe. And you'd probably come away with more than you asked for.

Another person might, to use one of my favorite Swistle words, dither so long that the need would pass or you figured out another way. Or the shoe would suddenly just show up with no fanfare.

I would give you the shoe, completely forget about it then be mystified later if you tried to return it. Or conversely, tell everyone about the time I was asked for my left shoe.

Posted by Surely at 8:37 PM No comments:

This year has been bizarre, not just the current bizzaro-world administration but all the things. The loss of Karl, the continual fragility of Kevin's parents, Kevin lost a coworker to illness. He has a dangerous job that we recently discovered has resulted in a loss of hearing in one ear and just the other day, some very bruised ribs.

Yesterday we visited an old friend who lost his wife about a year ago.  We hadn't been to the house since then as he lives far away. It was like time had just stopped within those four walls.  It's heartbreaking to see and made me feel powerless.  There is nothing we can do to help.  I'm a person of action so to be a passive audience member is horrible for me.  But it's not my life and as badly as I feel, he's probably feeling exponentially worse.

Kevin is seven years older than me and sometimes that age difference really shows.  Not often, but sometimes.  When we were talking about the above situation, he said something so darkly romantic that it really rocked me.  He said he realized that the time he has spent with me is now probably more than the time he has left with me and that it made him sad.  We've been together 27 years in October so the math plays.

We are in one of those life cycles where loss is the theme.  I remember this life cycle from when I was a child, it was one of those reasons one was given when one has an alcoholic parent. So, I know it's a thing.  A developmental life cycle that everyone has to go through.  But that doesn't mean it's fun.  We have to just bunker down and live our lives.  Perhaps stop paying attention to calendars and ages.

Posted by Surely at 5:09 PM No comments:

I've mentioned our young nephew before. The one who we knew was gay and was just waiting for him to realize it.  He's thirteen now but we've known since he was four. No exaggeration. And we're all TOTALLY FINE with it.  Our only irritation was the giant, feather boa'd elephant in the room that no one could talk about.

Kevin had to work on Saturday so at 5:30 in the morning I'm blearily scrolling through my social media.  My nephew had posted on his page earlier in the evening with his friends.  As you can imagine, I scrolled right past it because giggling teenagers showing off for the camera can be a bit much, regardless of what time it is.

Then there was another video, of just him, and posted much later.  Curious, I did click on this one.  It just had a different feel and weight to it.

He came out.  Finally, he did it.  Actually, he admitted to being bi-sexual, to be accurate but he said the words "I like boys" (followed by a muttered "and girls..." but BABY STEPS)

The relief I felt surprised me.  I mean, we've known for YEARS.  It's been a running joke of how he was going to finally come out.  No one is surprised, no one is upset.  I just wanted to post "We KNOW, Dude."

Thank God for social media because the response can be immediate. His first comment was from his dad.  His dad is blunt and makes me look like a diplomat sometimes.  It was a perfect response:
"You be you. The only problem I have is you being on Facebook at 0230. Go to sleep lol"

Then adult friends/parent figures commented, then his mom, then me:
I used the Dr. Seuss quote of "Be who you are and say how you feel because those who mind don't matter and those who matter don't mind" followed by "I'm gonna go with dr. Seuss here. We just want you happy, safe, and healthy. We don't care who you love."

Slowly, comments trickled in during the day.  All positive.  Hooray progressive family and friends! Thank you for a world where this is normal now.  His cousins, his aunties, his great grandma even.

I asked him if he has a girlfriend, the amended it to "or a boyfriend, either way is cool."  He said he likes girls but shrugged it off because these kind of questions are NOTHING these days.

When I was his age, one hundred fifteen years ago, I didn't really have an awareness but even if I did, no one ever talked about it.  It was considered impolite and even put the person in jeopardy because you didn't talk about it then.

What a relief for it to be "easier" now.  Not to imply for one hot second that it will be easy for him.  He will have his challenges, for sure.  But I'm not worried about it, not like I would have even when I was his age.

And what a new world that someone can just make a video and post it and it's totally normal and acceptable.  It seems so efficient.  But also risky.  People could have bombarded him with negative comments for sure.  I'm sure he had moments of sheer panic waiting for everyone to respond. But he had to know that we were all fine.

So, it's a whole new world.  No longer do I have to hear about Demi Lovato's hair (well, not as much).  Hopefully we will learn about what young men he finds attractive and if he's seeing someone.  Finally, we can have honest conversations.

Welcome to this new world, young man.  May it greet you as openly and positively as your family and friends did.
Posted by Surely at 4:57 PM 1 comment: