Kevin had to have a procedure the other day because that's how our life is going right now.  He's fine, it's all good.  It was just one more thing.

Other than the cheating death thing in 2005, he's incredibly healthy.  He's had a handful of E.R. visits for the usual stuff (fun stuff like cuts, burn, foreign objects in his eye)  But he's never been in a hospital so just the stress of that was A LOT to deal with.

Me, on the other hand, have had a few things happen so it's not a big deal.  We know how to cope with me but this was whole new territory for us.  Funny thing is that we discovered that Kevin was just like me when it comes to doing something like this.  He didn't want to talk about it, he didn't want to tell anyone about it, just leave him be.

We are rarely separated and work as a team on all things.  To not be able to approach this in a way we're used to was strange and disorienting.  My heart broke a little at not being there and also at the realization that he experienced that feeling when I was in the hospital.

The nurses brought me to him as he was coming down off the anesthesia. Again, the disorientation of the situation was overwhelming.  This is a guy who is rarely sick and you'd never know it if he were.   Kevin is never not moving or talking/singing.  Never.  When I first saw him, I burst out laughing.  "You are so hiiiiiiiiigggghhhh."  (If you have ever heard/seen Christopher Titus "Normal Rockwell is Bleeding" you will recognize the phrase)

He had to be told  three times about the procedure and results.  One part of the information we were given was a time-frame of 10 years.  On a normal day, Grosse Point Blank would have been quoted at a loud volume.  Imagine my disappointment when I can't yell "TEN! Ten years!"

They had him drinking apple juice to ward off hypoglycemia, etc.  He thought it magically appeared and we had to explain that they had a dispenser.  He was unconvinced.  The nurse was magic.

He was half in love with one of the nurses.  He was all twitterpated over her.  She was exactly the type he is usually attracted to, which ironically is opposite of me. She said goodbye as we left and I stage-whispered "He's half in love with you right now" and she laughed.  Later in the car, he told me again how nice she was "I wanted to hug her." he says.  This is not a huggy kind of guy so that made me laugh.

He was hungry and tried to insist that he was cool enough to go into a restaurant.  Big, fat NO. "You are so not cool right now."  his response was a dismissive whatever hand gesture that I've never seen him use.  I told him we would go through McD's drive-through and I would also stop for coffee on the way home.  I ordered him the Eggo-Muffin (he calls them that when he's not hiiiggghhhh) and the breakfast burrito.  It came with a juice box and his palpable disappointment at dealing with a juice box had me giggling all over again.  It is still in our refrigerator.

He finished his breakfast in between naps and telling me about the whole procedure and the nice nurse for the fifth time.  He asked "Do you want a bite?"   I don't like the burritos so I said no.  "Oh." he says, visibly disappointed.  "Are you sure?  Because they're really nummy."  I'm still giggling at that one.

Of course he has no recollection of any of this.  He too was disappointed at the lost opportunity of the "10 years!" thing.  He denies saying "nummy".   Everything is back to normal now and we can forget it ever happened, or not remember as it were.

My mom has been fascinated with the family history research that I've been doing for her.  She phoned the other day to tell me about items she had found from my paternal great-aunt's estate. Here is how the conversation went:

"Well, my house is a mess right now.  I've been reading all the things that you brought out and I was looking for some other stuff to give you.  I found your cousin's names, the ones who have the family tree and the map of the Oregon Trail that your dad gave away. And I found some of Betty's papers."

"Your niece came over the other day and she knocked on the door but I was in the shower so she went and got the key then went to the north door (like I know which way is north) but I had moved the dresser that sits there so she couldn't get the door open.  So, she moved it. She's so strong, I don't know how she did it."  ( I don't know why she didn't go to any of the other doors but that's not the point)

"So, I was reading and it's all so interesting and I want to find out more so maybe you could look on your computer and find out about..."

"Then your niece left so I had to put the dresser back but it's so heavy. I don't know how she moved it, she's so strong.  I had to take one drawer out but it was still too heavy so I had to take another one out and then the other then I could finally move it.  But then when I was putting it back together, the bottom of one drawer fell out and made a big mess."

This is the edited version but this is pretty much any conversation with my mother.  A LOT of listening.  (and perhaps a glimpse at who I inherited my ADD from)

But that's NOT EVEN the best part of the conversation.

My parents live on a lake and their driveway is on a hill that's quite steep. The mailbox is on the main road and my mom has been taking the car up to get her mail.  She's 81 years old so I'm happy to hear that she's not walking up it anymore.

She was getting her mail and realized that she had locked her car accidentally.  She pushed the key fob and it wouldn't work.  As she was standing there, she said that a motorcycle went by and she waved at them.  Not in a "Please help me" way but in a friendly way.  (81 years old, waving at strangers on a secluded road. Excellent choices my mom makes)

So, she walked around the car and continued to press the fob to unlock the car but it wouldn't work.  She had just decided that she would walk down to the house and call AAA to get into her car when the motorcycle returned.

Now, in my imagination, I have my mother dead and buried and on the 5 o'clock news but clearly, I am talking to her now so that didn't happen.

"Well, it turns out it was an off-duty Sheriff's deputy and he came back to check on me."  Thank you, universe.

One of my uncles was a California Highway Patrolman in the 1950's and he was killed in the line of duty.  It's one of the many losses that my mother's family endured.  With that, my mom has always had a soft spot for a man in uniform.

The deputy helped my mom unlock her car with the ACTUAL KEY instead of the fob.  I'd like to say this happened because she's in her eighties but it would have totally happened during any other time of her life.

This is where my mom tells me that she is convinced that the deputy was the reincarnate of her brother.  She said he looked the same as she remembered him, he had the same mannerisms, and it was like they just knew each other.

She offered him a hug and he accepted then he made sure she got into the car and waited until she was safely back at home.  (You can see their house from the main road)  She was so HAPPY about the encounter.  It was sweet yet kind of funny.

While writing this, I searched ancestry for a photo to attach to this post but there wasn't one.  I searched the google next and look what I found: 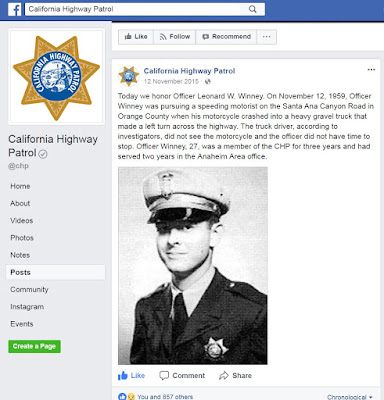 The California State Patrol honors fallen patrolman and two years ago (almost to the date) my uncle was honored.  There were 97 shares, 65 comments, and 857 likes.    This is one of those times where I love the internet.

To my mom and the internet, Uncle Leonard is still alive and remembered.