So, my latest adventure has not been a good one. Not even a glimmer of good. You see, in the snow that I love so much, I managed to roll my truck. Yeah, not my best day.

It was probably mostly my fault; I over-corrected and probably should have been in four-wheel drive. What started the entire thing was someone else coming toward me and hugging the yellow line. Unfortunately, that someone else kept going. They were going fast enough that they may have seen me get out of shape but not go over. Or, if they were clueless enough to be hugging the yellow line, one could assume that they didn’t bother looking back.

During my explanations of what happened…people are fascinated to hear about rollover accidents!...it has become clear that something I learned from the drag racing world is something worth sharing with the rest of the world.

If you are about to be in an accident and have the wherewithal to think of this, please do:
Either cross your arms across your chest or over your head. (In my case, it was over my head) This prevents a few things: head injury, of course. Although I do have two bumps on my head where my hands didn’t over it completely. (more on that in a minute)

But more interestingly: it helps prevent your arms from being broken or damaged. If you rollover, your arms aren’t able to flail about or get pinned. If you’re simply in a crash, it will keep you from gripping the steering wheel in panic and possibly breaking your arms. And/or it keeps them from getting pinned by the airbag.

I learned this when a fellow drag racer crashed at the racetrack a few years ago. She, yes, *she*, told us that shortly after she put her car into the wall at about 120 mph and emerged with nothing but a headache. (Thank you NHRA safety rules!)

I don’t know how or why it popped into my head at the time but it did. Also, it was a slow roll so I had a little bit of time to contemplate what was about to happen…and curse profusely.

It’s occurred to me that perhaps this is something that should be taught in Drivers Ed classes. Browsing through my niece’s drivers ed book, I realized that it’s been 25 years since I’ve had driver’s ed and I know the rules & laws have changed a lot in those years. The strange thing about Washington State, and perhaps all states, is that there isn’t a
re-testing exam required. Once you have a license, that’s it. Seems foolish.

Another funny little safety tip: I had just gone grocery shopping so I had two gallons of milk and about five bags of groceries in the cab with me. Whereas if they were in the bed, they would have been scattered hither and yon but because they were in the cab, I not only was able to retrieve everything, they probably kicked my ass as we went over. As D said "Nothing like a gallon of milk to the ribs for happy fun time."

Funny Aside: The Mad Genius was feeling the bumps on the back of my head the other night. He slid his fingers gently over the bump, looked at me sagely and murmurs “Peas” then turns away. That was one of the funniest comments of this whole adventure.

Oh, and we had the Doogie Howser of tow truck drivers. (You can see him in the pictures) Dude didn’t seem old enough to have his driver’s license, let alone operate a tow truck. But he did a good job. He even got the sarcastic irony of me mentioning that he had a back-up light burnt out. Yeah, me – the one upside down over the embankment – reminding him that he had equipment failure. Good one!

Oh, and there are just so many levels to this story…

I called the accident in to 911. They had an officer call me back as it was a non-injury accident. He asked me if the vehicle was drivable. After a pause, I replied “It’s on its lid, Dude.” There was another pause and then an audible, long sigh “I’ll be there in a minute…” (Can’t blame him, we live 20 minutes away from everything)

AND THEN, he was a little late getting there. He explained as he began the paperwork”
“I’m sorry I was slow getting here. I arrested a drunk driver.”
I told him “Good Job! Thank You! You can be late for that.”
“Well it’s a funny thing.” He says. “He pulled up to me with a question. I was finishing washing my rig and he drove up. He had a question about his muffler, which he had cut completely off because he had a “fix-it” ticket. Turns out he was drunk. So that was easy.”

Hmmm, I think that’s all there was to the story…like that wasn’t enough! 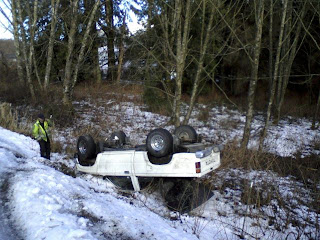 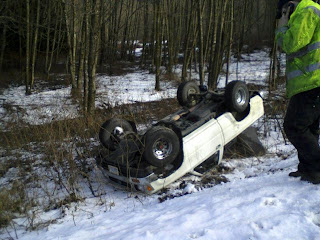 Except for the horrible queasying sight of your truck, I was laughing most of the way through. "Peas"! "It's on its lid, Dude." The drunk guy. Ah ha ha ha ha ha ha!

SCARY!!! Glad you are okay! And I am with Kristen...horrifyingly hilarious, hee hee!
Wendy