Anyone who knows me knows that I am direct, clear, blunt.  A person never has to wonder what I am thinking or feeling about something. Just ask or sometimes asking isn't even necessary.  But be careful because I will tell you.  It's never meant unkindly and more often than I'm willing to admit I'm not necessarily thinking about how/what I'm saying something before the words are out of my mouth. This is why this graphic makes me giggle: 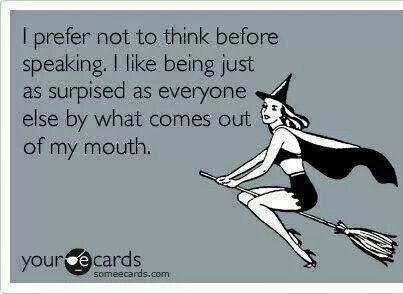 There are people who don't enjoy this personality trait.  I know, right?  Go figure.  I can appreciate that some people are more sensitive than others.  When I'm aware of someone like that I try to temper my thoughts and words accordingly.  If my words get ahead of my brain and I realize it, I will often apologize or just simply acknowledge to the person that I spoke thoughtlessly.  I do the best I can.

I looked up the definition of rude and found that it doesn't necessarily apply to me...or at least I don't believe it does, others may have differing opinions.  I looked up synonyms next and that list was a little more entertaining and informative.  There were, indeed, words that could be used to describe me from time to time.  Some of them make me a little cringy and some of them make me giggle. (I kind of love the word "surly")

Often I have found is that the people who have something to hide, are insecure, or have control issues Really Don't Appreciate It. Really. Don't.

But I've never really worried what others think of me.  It's just never been important.

I stay true to myself and my style, and I am always pushing myself to be aware of that and be original. See the link below for
more info.

Your post is superb. Thanks for sharing us updated information.

Love it! Very interesting topics, I hope the incoming comments and suggestion are equally positive. Thank you for sharing this information that is actually helpful.