What I've Been Doing on Summer Vacation

So much stuff going on.

Okay, firstly, the mother-in-law.  She's doing okay.  We're tentatively pleased that she has been home one month without returning to the hospital.  She's on oxygen and still not eating well but we've recently learned that she's doing about as well as someone in her condition can.

They continue to shrug off help and we've all had to just take a step back and let them manage.  We are just going to have to wait and hope that nothing goes terribly wrong. In the meanwhile, I work in the afternoons so that leaves them unsupervised, if you will, for about three hours.

I had to do a final exam for my ankle last month.  The doctor remarked how well I had healed after "such a traumatic injury."  It was a little jarring to hear that, again.  It's been three-plus years since that adventure started and it's kind of faded into the dark corners of my memory.   I am hoping that the exam is the last time I have to deal with that whole thing.

The photo project has stalled.  It has been over 80 degrees here for a month and many days over 90 degrees.  Not only is the office uncomfortable during the summer, I just didn't feel like it was a good idea to handle old photographs when it's this hot.

And...work.  This week will be the first normal week that I've had.  Last week was spent as training, with training being defined as lots of overdue filing.  To boot, for the second time, I have begun a job without an actual desk.  Because I am job sharing and the person is there, I am left hovering at other peoples desk.  I have to admit that I'm a little disappointed.

But I am using some of the advice from Swistle's latest posts about new jobs into play.  Be patient, look for solutions or things I do like, and voice concerns when the opportunity arises.

I know that after this week, the job will look differently so I need to be patient.  I set a goal to finish all this filing so that it's no longer an option.  Finally, yesterday before I left I got to chat with the executive director.  She asked how I was feeling/thinking about my first week.  It gave me an opportunity to say "Well, I've done lots of filing..."  I'm relieved to say that she was a little surprised and stated "We'll find other things for you to do."

The gardening project has taken a beating because of our unusual heatwave and now smoke from the fires in British Columbia.   A few of the plants are looking pretty bad but I'm hoping to limp them through the summer.  My dream is that next Spring everything will bounce back and be lovely.


About that heat wave, I know others have rain and tornadoes but this heat is overwhelming.  We're used to low-mid seventies and rain, not a month of high temps.  You can tell that people are getting a little stabby because we're missing our rain.

We bought a kiddie pool and put it out on our deck. Then Kevin put up one of our canopies from the race car trailer and now we have a lovely little oasis out there.  We sit out there after work or whatever with our feet in the pool and just relax.  It's absolutely lovely and a foreign concept to us. 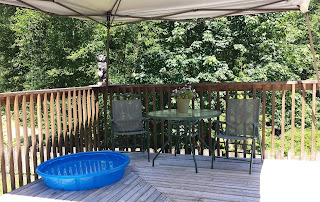 A friend of mine added me to a summer reading challenge.  I started with A Million Little Mistakes and it was very disappointing.  I actually laid on the floor of the office and read it in about an hour.  Next I read The Thirteenth Tale, which I've been meaning to read for years, and really enjoy it.  I have a book on my tablet called The Reincarnationist that I want to start.

That's how my summer is going.  Busy, full of change, and getting slightly less stressful

I love your little oasis!