Zucchini, for the Win

We've reached a stage where I'm trying to think of things we need to know from Kevin's mom before her memory totally goes or she passes.  Thus the urgency to get the picture project finished and photos given to the cousins.  We've also kind of purposefully having her tell stories so that history gets passed along.

This is inconsequential in the grand scheme of things but her fried zucchini recipe was one of those things.  She's the only one in the family who makes them.  Things like this are what get forgotten until it's too late.  Sure, we can look recipes up online but they're just not the same.  Of course the recipe hasn't been written down because she's been making them for over fifty years.

So, the other evening Kevin told me that his mom had made fried zucchini and he was going over to get some.  I told him I would come along because we really needed to get a recipe from her.

First off,  the parents react like I've just learned to tie my shoes when it comes to learning something new to cook, it's not condescending but actually kind of endearing.  So when the opportunity arose to actually teach me something,  the heavens opened.

Of course, she has a specific dish that she makes the batter in.  It's probably a hundred years old and was Kevin's grandmas "every day" dish.  It looks a hundred years old.  Next came how to make the batter.  It's simple: 1/2 cup flour, two eggs, a little milk, whisk (I just had to make the gesture of "whisking" to remind myself what that word was...so not a cooker...sigh)  It should be about the consistency of pancake batter.

Thinly slice the zucchini and dip in batter.  Tap it gently but not too gently.  As I learned, there is a balance of too thick and too thin.  Kevin said "Mom said to just give it a little tap, tap, tap" to which I responded "Just a tap, a little tappity tap tap tap"  (extra points if you get the Happy Gilmore reference, otherwise I just wasted your time.)

This is where I say that I don't fry anything.  I hate frying. Hate. It. I hate the popping of the grease, the mess, the smell, the fact that I have to stand there the whole time, everything.  Hate it.  So, I have to squelch everything that I am in order to do this.

Prep was easy because she sent me with batter in the hundred year old dish.  She actually laughed in an exasperated fashion when I said I didn't have flour.  (in case the batter needed thickening)  I sliced everything up and off we were.

First few had too thick of batter. The next few were almost perfect but I forgot salt and pepper.  The last bit was not as good as mom's but getting there.  Kevin called it a success, so that's all that really matters.

Of course, I posted my "victory" on facebook because that's what you do now. I was surprised at just how positive everyone was. I don't know why, I just was.

Feeling perhaps over-confident, I tried again two nights ago.  I already had fish baking in the oven so I thought I could get it done easily enough.  Dude, I was so wrong. So. Wrong.

Like always, I underestimated my time.  The fish ended up being over-done.  I forgot to start the rice and chaos ensued.  I took the fish out and set it on a burner and moved on, forgetting that the burner was hot.  Not only did the fish begin to literally fry, the pan BROKE when I took it off.

This is why I don't cook.

But the zucchini was so good, Kevin took his mother a small plate of them so I guess I win. 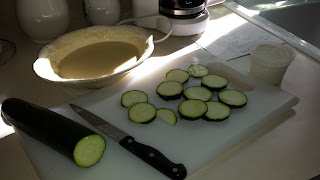 For me, the absolute hardest part of cooking is the "getting everything done at the same time" part. I don't know how people do it. I am more of a "courses" cook: "Hey, the chicken is ready, eat it while it's hot! Okay, it's 20 minutes later and the potatoes are done! Ten minutes after that and we've got CORN, people!"