Contrary to my conspicuous absence, I am not dead.  I have wished for death a few times over the past weeks but alas, I am here.

No, not the 'Rona.  Almost worse.  Everyone is fine, everything is fine.  "Fine".  My sanity and carpet have taken repeated hits but here we are.

I mentioned a while back that Lucy had a growth and we had to have it removed.  It was on her bum and grew quickly, like in a month quickly.  Surgery was scheduled and breath was held.

Now, when I say the last three weeks have been a complete and utter sh*t show, I mean that ACTUALLY and LITERALLY.

What had happened was: the surgeon used dis-solvable stitches for the first surgery.  Those stitches held...checks notes...not at all, it turns out.  She was unable to control her body so there was poo where she laid, where she sat, where she stood, on her bum, on her blankets.  POO EVERYWHERE.

We can't keep her calm and resting and WORSE BY ALL THE MILES: she isn't able to keep poo inside.  It's like the bum was just open so she constantly felt like she has to poop and there is never not poop present.  AND she'll be sound asleep then something happens and she jumps up, runs around, tries to scrub her bum on whatever available surface whilst pooping.

AND THEN, we couldn't keep her clean.  It was matted on her tail and she was getting a diaper rash, essentially.  She started to resist being cleaned.  And she can't sleep through the night without pooping.

In addition to the no stitches, they had us giving her pumpkin to make sure her stool was soft so she could have less pain with pooing.  So, lack of control AND not-quite-diarrhea.  Also: I may never eat pumpkin ANYTHING ever again. Ever. I have Pumpkin PTSD.

Finally, after a few phone calls where we were told this was "normal", I insisted and took her back to the vet.  She was red and swollen and clearly uncomfortable.  And, let me say it again: POO EVERYWHERE.

They took her to be examined and the Vet came out to the truck to talk to me, never a good sign. It's always the vet tech.  Yep, she needed another surgery. Not only FML but *swinging of arms all around* F*&K Everyone's Life.  They would phone me to let me know when and we went home.

The vet is twenty-five minutes away in my hometown.  We had gotten home, I had cleaned myself up and got her settled when the phone rang.  They wanted her at the clinic RIGHT NOW.  Back into the truck we go, back to the clinic.

I dropped her off and they explained that they would keep her overnight this time for observation.  I was SO relieved just for that.  We hadn't slept in a week.  Imagine a toddler with explosive diarrhea for a week.  (We have since realized that parenting was NOT FOR US so thanks Universe for that)  The washer has not stopped since the surgery, there is plastic on my office floor, one of her beds are ruined and the frustration level was off of the charts.

One I returned home, I scrubbed the house from ceiling to floor, including washing the carpets.  It feels like the house will never be clean again.  I'm trying to ignore that the washer has begun making a sound during the spin cycle.

It's like pressure washing BUT FOR YOUR HOUSE.  So satisfying.

We went to bed early, slept through the night, and in the morning they phoned with an update.  I did all my weekly errands then went to pick her up.  They sent home some more meds, continued bedrest and Oh, by the way, this resets the clock for TWO MORE WEEKS.  Yes, yes, I was teary and frustrated.

I mean, she can't be left alone. Not only was it Poo-apalooza, she would get anxious and want me RIGHT THERE.  She would prefer to be ON ME and in my personal space.  Instead, she was confined to my office with plastic on the floor and a regular exchange of blankets and towels.  FOR TWO WEEKS.  She's managed to work around every version and combination of the cone(s) in some way.

Thankfully I work from home and this did allow me to get a truckload of work completed during my busiest time.  But with POO.  This situation was slowly subsiding and then it wasn't.

Now we're to Saturday.  I woke up and the dog was still with me on the bed.  Kevin reported that he came to get her three times and she declined.  He didn't think much about it but I was all "Oh...no..."

Sure enough, she had pooed a little but now, there was a little blood.  Sigh.

Kevin took her outside to go potty (which had been going great post-second surgery) and she couldn't and she was bleeding.  Now we are on our way back to the vet for an emergency appointment, again.

Then there's the new medicine.  The vet tech was explaining what it was and how to use it when she paused. "I have to ask is there anyone in the house that is allergic to Sulfa meds?"

BECAUSE WHY NOT.  Of course I'm allergic to sulfa meds.

It is an ointment that has to be applied twice daily.  "You can wear gloves but be CAREFUL" (side note, quoting Kevin: "Why would she think we WOULDN'T be wearing gloves in the first place?")

They said again to keep her sedate and calm.  This is where I will express some frustration:

HAVE THEY EVER MET A DOG?  An ACTUAL DOG?

Lucy is so active so we have to keep her absolutely knocked out in order for this to happen.  I am medicine-hesitant already and this is making it worse.  Also, I hate to be repetitive but POO EVERYWHERE. We couldn't just keep her calm and sleeping 24/7 for two...now three...weeks without medication.

So after I dropped her off for the second surgery, I went to the independent pet store and bought CBD gummies for her.  We give her two - three, twice a day, and it mellows her out without making her unconscious.  Then we use the big guns for night time so we can sleep.

Oh, I didn't mention sleep.  After the overnight stay at the clinic, Lucy has decided that her crate is Guantanamo.  She refuses to go into it.  We moved it into our room and still so much no.  INSTEAD we have a layer of blankets under her and because we can't let her jump or roam, a leash tied to our bedframe to prevent her from leaving. Yes, a leash from one end of the bed to the other.

And she wakes about 2:00 a.m. and needs to go outside and a changing on the blankets.  Kevin takes her out while I change those and start the washer, again.  We sleep another (maybe) three hours then our day starts.  I've had to begin showering before Kevin leaves for work at 5:15 which I don't enjoy but it does make my day easier.

One of the suggestions for keeping dogs calm and sedate is to "Give them a view"  This made me laugh because....how?  Do we build her a deck in front of the window so she can see outside?  The vet and the pet store suggested Dog TV channel so I got it.  She is absolutely un-interested, COULD NOT CARE ONE BIT.  I tried to put her on the deck but if a rabbit appears, there is no SEDATE AND CALM, even with the meds.  Thus the Dog TV channel that she doesn't care about anyway and being stuck in my office.

Now it's Tuesday and she's both constipated and still leaving "tracks".  We are counting minutes until Wednesday's appointment to get the next steps.  The appointment was first thing in the morning then they had to bump it to the afternoon because the universe is testing me.  While it is supposed to be stitch removal and a return to normal, we both have a feeling that we're still a week out from that.  Unless she makes a miraculous recovery in the next almost-two days.

We had to have one of the nephews dog sit her one day during the week last week because we had made plans to go to Seattle.  Now we have an opportunity to go to the track in Canada this weekend and we're again trying to work out who can stay with her.  Just trying to coordinate that adds to the stress so we're not committed to going.  (we will have to wait until Spring to go if we don't though)

So, with all that there are two things:

We are in over $3500 in costs, probably more if I really thought about it, and that is a lot to spend on a pet, FOR ME.  We couldn't get pet insurance because it was considered a pre-existing condition.  AND the clinic doesn't take insurance so we'd have to pay out of pocket then get reimbursed anyway.

Finally, the bigger issue:  the removal of the gland made the surgery significantly more of a thing than planned.  We are concerned that if this turns out that the poo thing is a non-resolving effect of the surgery, we have some big decisions to make.

It's not just the mess, (but my gawd the mess)  it's the quality of life for Lucy.  She went from being a free and happy puppy who rarely heard "No" to being confined to one space, on a lead and wearing a cone, being told No a lot, being on painkillers, and not feeling well.

So not only is Lucy at the end of her rope, so are we. Let's hope, but not expect, a good outcome at tomorrow's appointment. 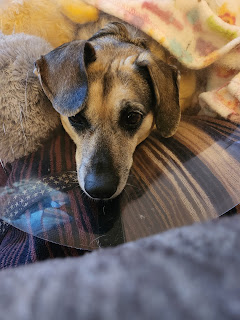