Yet Here I Am

Filed in the "Be Careful What You Wish For" file is my job.

This time last year, I was hired for what I thought was my dream job.  It was part-time, it was easy, and most importantly, it was an organization that I had wanted to work for forever.

For awhile, it continued to be my dream job. Then there was a major change, I took on more hours and many more responsibilities.  The work was beyond my skill-set and the learning curve was more of a hill. I persevered though.

I mean, really, there isn't such thing as the perfect job.  There are always going to be personality conflicts, tasks that you don't enjoy, or just the fact that working is rarely high on anyone's list of A Few of My Favorite Things.

Actually, let's pause a second.  I have to say that I adore my coworkers.  ADORE.  They are a great group and I feel lucky and blessed every single day.  Of course, it's not all perfection because: humans.  But as a group, I couldn't ask for anything more.

So, Surely, what is your problem? you ask.

I work for someone who clearly is in the early stages of dementia.  Whatever the cause or level, she is unable to sustain a thought for longer than a few hours.  Items are constantly lost, appointments forgotten, and just general befuddledness is the soup of the day.

Now, if you've been a dear reader for very long, you're aware that I'm painfully aware of dementia.  Kevin's mom has had it for a few years.  I think that's why I incorrectly and perhaps arrogantly thought that this would resolve itself eventually.

But here's the fun thing about dementia.  They don't know they have it and they will argue to the death about it.  On the same level, they DO know something is wrong but they can't pinpoint what exactly it might be.  But as much as you know you're eyes are blue, they deny that they are failing and believe that just as strongly that they're fine as you do about your eye color.

Now, a person might be thinking "Well, just go to work, do your job, and get out because there are so many other positive factors."  Until I tell you that we, unfortunately, share an office.  There is no head down, do your job, and get out option on this menu.  And, working with someone who is forgetful is a specific kind of crazy-making. A person begins to doubt themselves; as in second-guessing.  "I sent that right?"  "I said that, right?"  "I did that, right?  Twice, even."

I have managed a few work-arounds.  I start earlier, which I don't hate but it's not my favorite.  I wear headphones but that isn't always a reasonable solution.  I share frustrations with a coworker so they don't escalate into something worse. I try to have important conversations with another person involved in addition to Suzy Forgetful.  I email everything that I possibly can.

But the days are still challenging.

I subscribe to the belief that everyone has a boss.  Everyone. It's usually my go-to card when I bump into issues with things like poor customer service.  In this case, there is a board and I have spoken to the board.  They promise they are working on it and a change is to come.  But, it is progressing so slowly that I am losing faith.  How long does one wait for something like this to resolve? I told myself that I wouldn't do this again, yet here I am.

Another big piece of the puzzle is this:  I just left a job two years ago because someone had gone crazy pants.  Telling a donor she might have cancer from pretend mold in her office, running the organization into financial ruin while ordering room service, pretending to not know how to celebrate holidays, crazy pants.

I'm feeling culpable at this point. Is it me?  Do I take jobs where only people with issues work?  Do I create these issues?  Is it my job in life to fix these kinds of situations?  I would like to politely and emphatically decline all of these options.

There really isn't a point to this post.  I'm not unlike every other working person in the world, I'm not special.  But I am frustrated, and disappointed, and really trying to get creative in my coping skills. And once again being reminded that there is no such thing as a perfect anything.  Especially and specifically a job. 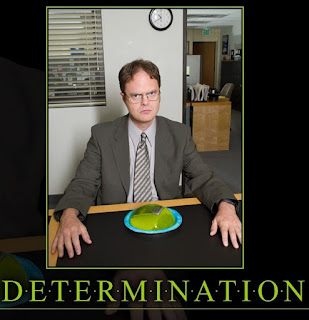 Oh no. Ack. This sounds so hard.

I think it's what we've talked about before, that non-profits and the similar organizations we're drawn to, seem to have a similar draw for Very Difficult and/or Quite Nutty people. Er, not that this says anything about US.