I am unsure if it's a regional thing or not but placing painted rocks around the community for folks to find has become a thing.  I've a few facebook friends who participate so that's about the extent of my knowledge.  I believe you're supposed to pay it forward if you find a rock, but it's okay if you don't.

I often see the painted rocks on social media and marvel at them. It's one of those things that one admires and thinks would be fun but then immediately forgets about.

Because things have been stressful and unfun family-wise, Kevin and I have been doing random things just to break the stress.  Last Saturday was a trip to his work to see what's doing there.  (He's got new equipment, lots of projects, etc. It's more fun than it sounds and well, we weren't at home.)

Afterward we went to breakfast in town.  It's a very small town and one of those places that you go through on the way to somewhere else.   Not somewhere where it would occur to me to even look for such a thing.

We stopped at a cafe that had recently moved into an old Burger King.  We were wondering how it was going to look, going from a tiny cafe in a converted house to a fast food restaurant.  A fast food restaurant that was closed because it was so unsanitary, they lost their franchise.  YIKES.

As we were walking to go inside, something caught my eye.  I backed up and exclaimed "OH! That is SO COOL!"

Someone had placed a rock to find on the ledge of the building.

AND it was a DOCTOR WHO rock!  Thank you, universe.

I picked it up and turned it over to make sure that it was one of those and was excited to see it was. Kevin was skeptical though, "What is that? Wait, you're TAKING it?"

He was totally confused...why are you taking a rock? what is Bad Wolf (he's not a Whovian, obvs.)  Why would someone do that? Are you sure?  I explained to him but he remained skeptical.

I posted it on my facebook and thanked the group.  Now it sits on the end table where I can see it often and be happy. 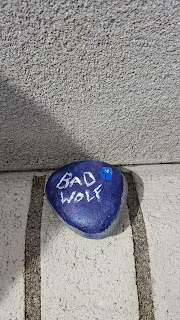 Thank you random, kind stranger for taking the time not only to create art but to share it with the world too.  It made my day and continues to give me happy.

I LOVE THIS WHOLE CONCEPT. I want to start it in my community!!