These Moments are Fleeting

As described in previous posts, family can be stressful.  Yesterday was Easter and with seven children, most of them teenagers now, it gets a little crazy.

The littles, who will be twelve in May, still wanted to do an egg hunt.  We were a little surprised but assumed they were going to do it with Sweet Baby, thus "justifying" doing a little kid thing.  But no, they were totally into it.

Then the baby fell asleep.  To be fair, he's two and it was nap time.  And we were all a little jealous.

Because reasons, Kevin and I have become the grandparents in these adventures.  We helped the adults kids hide the eggs and helped coach the kids in their search.  Well, I helped, Kevin smack-talked, which the boys adore.  The highlight was when Kevin called  C2 - the 14 year old - "Bruh" and he burst out laughing, saying "Dude, did you just say...bruh?" in complete disbelief.  Anyone who has teenaged sons knows what an accomplishment eliciting laughter can be.

We had to hide them in more difficult places this year; up high and in places nearly out of their reach.  One was tied onto a tree branch, one was balanced on a stump in a watery ditch.  Oh, and Nephew usually hides a bug in one of them so paranoia was high upon opening the plastic eggs.  If you know me IRL, you'll see the photos on the facebook.

After the hunt, we returned inside and the kids went through their candy while we enviously watched.  Family Feud was on and it was interesting to hear the kids play along. They understood some of the racier jokes yet one of the Boy Littles were frustrated that contestants making the "X" sign wasn't how you high-five and "Nobody high fives like that"   Girl Little is actually pretty good at the game and it was fun to have them old enough to participate in things like that.

Once everyone settled down, Girl Little sat next to me and before I knew it, her head was on my lap and she was snoozing.  Like with the teenaged boy, these moments are so rare now.  I carefully took a snap with my cell phone to keep the moment forever.

We know the clock is winding down with the parents but it didn't fully occur to me that the clock is also ticking with the kids.  Soon they are not going to want to hunt for eggs or snuggle while waiting for dinner.

So five minutes peace with a sleeping kid and making a sarcastic teen laugh. These moments are fleeting. 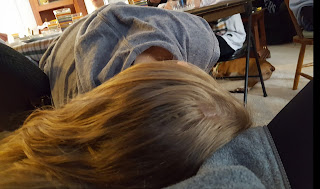