I have an Office Space level coworker who is unfortunately located right next to me.  Fortunately, she isn't here every day because otherwise this would be unbearable.  However, the small pockets of time that she is is LONG.


Usually I have music playing but I didn’t start it today because I am leaving soon. This both amplifies and yet quiets her.  However, she will usually sing along to the music even though I have it on barely audible to anyone but me.  (I’ve tested, and asked, to make sure)

This isn’t happening now but will most assuredly happen:
She prescreens webinars for staff.  With.The.Speakers.On so all of us can hear it.  It’s usually birth-to-five based so imagine jenky-happy music and kids giggling.  Not disconcerting at all.

Why doesn’t she wear headphones, you ask?  Sometimes she does but then…because there’s always a But Then…she has a tendency to dialogue with the webinar or sing along or and I’m sooo not kidding: clap her hands.  It’s like the headphones forces the other parts of her body to be louder.

And the fact. FACT, I say, that every food she eats is wrapped in plastic and crinkly wrapping that apparently takes escape room level timing and skills to unwrap. (imagine opening candy in a quiet theatre)  Oh, and the fast food soda cups...sigh. She is not only an ice chewer but a slurper as well; accompanied by the ever soothing sound of the straw scraping against plastic.

In case you worry that I might be melodramatic, I must also mention the day that she was listening to music through her headphones and shall I say so were we.  It was so loud.  BUT THEN and I swear to gawd this is true: she began to sing The Backup Vocals.  The "Ooh" and the "Aahhs" and Whoaaasss" parts.

It was suggested to her to use a slinky (and we hate that person) when she feels herself stressed and/or overwhelmed.  One day, when she was unfortunately here all day, the slinky was employed throughout the day.

Oh, and most of the time during all this: I have earbuds in.  I can still hear her over the earbuds.

The slinky makes us all mental and this is where I realized I forgot to tell you that human is a mentor/instructor for the staff.  One would think self-awareness would be a required qualification, but what do I know.  I’m a data geek. 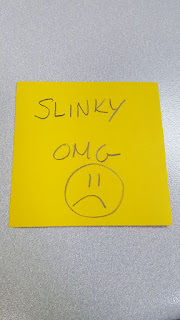 OMG the slinkying I would lose my fool mind