It's been about a year since I started this new job. I know, right? A year that I envisioned would never end and that I would be miserable the whole time.  A year that I swore would be temporary.

Well, I just signed a letter of intent for the next school year so the second year of my contract is officially enacted.  It feels odd that it's been a year already and it feels odd to sign a contract to commit to another year. It makes me a little panicky but it's mostly good.

As you see, I still have hesitancy about this whole thing and I guess it boils down to the returning home thing.  I've mentioned before that I totally understand why writers have their protagonists return home so often in their storylines.  It's a thing.  A real thing.

I left town over 25 years ago and didn't really look back.  Sure, I drove through town or whatever but I really didn't spend any real time there. I left for two reasons: 1) my personal safety and b) new and more opportunities elsewhere. Well, three reasons: life.

During that time away, it seems I metaphorically sealed up this town and kicked it back to the dark, dusty corner of my memory to be forgotten.  Now I'm here every day during the work week and it's real. No avoiding it although I have been in absolute denial. Until recently.

The epiphany happened for me while Kevin was watching The Walking Dead:  I'm working in my Post Apocalyptic Hometown.  Everything looks similar but it's not the same.  People have changed,some people are gone or dead.  Everything is different yet in some ways the same.  I can kind of see what has happened during my absence but other stuff remains a mystery. Post apocalyptic.

I've had to acknowledge some zombies along the way and that hasn't been super fun.  Fighting zombies rarely is, from what I've gathered.

Yet for all the differences 25-ish years have made, there are still moments and memories attached everywhere. Every.Doggoned.Where.   I believe I'm mostly past the jarring "Oh that horrible thing happened there" and tend to focus more on the positive happy memories that do exist here.

I've kind of methodically visited different spaces, like testing the soreness of a bruise. The place where we all hung out before everything fell apart, the park where I used to sit and have lunch, houses of old friends who haven't lived there in years. These little field trips have allowed the happier moments to rise up and snuff out the ugly ones, mostly.

It's happy/sad now. There's comfort in some of these memories yet I need to not be sucked into a melancholy nostalgia either, searching for how it used to be and trying to recreate it. I have to adapt to this new place.

Yet, the invisibility still continues. I haven't told my friends who are still here that I'm back working in town yet. (Yes, I suck. I own this)  I haven't visited my family, but those have other reasons attached. I'm still a little vigilant about my whereabouts and probably always will be because a permanent restraining order still exists.

In the meanwhile, I will keep moving forward and pushing my boundaries outward until this Post Apocalyptic place becomes a new normal.  I continue to slay the zombies and rebuild. 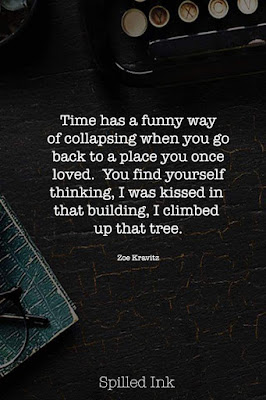