My grand-nephews birthday is this week and the party is Sunday.  He's the original grand nephew, my niece's son.  He's also my godson.  Unfortunately for everyone involved, he's socially awkward.  He's home-schooled which isn't helping the situation at all.

He is difficult to buy for because he tends to want toys younger than  his age. To add to the difficulty level, his mom is notorious in announcing Every Single Time "Oh, he has that one already. We'll take it back"  So cringey and unnecessary.

Turns out that he's a very good reader.  He's 8 and reads at a middle school level.  He enjoys the Diary of a Wimpy Kid series, being a bit of a misfit himself.

I went to the local bookstore Village Books, which is like sending an addict to a crack house.  I love this store SO MUCH that I don't go often for fear of having to live in a house built of the books I've purchased.  It has a gift shop attached that will wrap your purchases for free.  It's such a great place.  I mean, look at it: 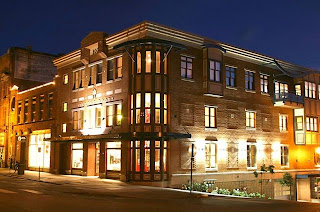 Anyway, it's tough to find books for that age.  It's easy to go too young or too old.  I saw lots of titles that I read as a child.  I was tempted to buy them to read again.  It's also interesting to read the writing.  There were a handful of books that just wasn't written very well.  Or the premise was terrible. Did you know there is a series of books that the kids die in a freak accident and go  to Heck?  Oh my Gah.

There are, of course, Wimpy Kids knock-offs that I passed by.  I found a few books that seemed pretty good. But I kept browsing because hello? bookstore!!!!

I found these books just as I had given up.  They sound so good that I might read them as well.  I took them to the checkout counter and quizzed the cashier. I explained that he was a socially awkward young boy who was a really good reader.  I was looking for something like Wimpy Kid but not trendy.   To my surprise she said that these books were perfect. 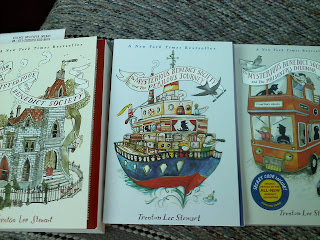 It seems that the characters are kind of misfits.  They set out on an adventure and have to use what makes them different to solve the issues that they encounter along the way.  The weirdness of them turns out to be like a superpower.

I love thinking of personality traits like that.  It makes them more bearable, I guess.
Posted by Surely at 9:40 PM

I've read the first one of that series and it's SO! GOOD!!

(I read it after Paul read it to the big kids with huge success.)

i haven't read them but both of my kids have and both loved them. for future reference, he might also like the series by percy jackson, although their more greek god's type of things. another series my kids liked.