If you've been anywhere near the television or interwebs in the last 24 hours, then you've heard about the bridge collapse into the river.

First said: we're all fine.  Kevin's brother missed it by less than ten minutes.  The freeway closed *just* in front him. So, whew. Kevin missed it by over an hour.

We had just returned from the machine shop which was the opposite way by a half hour.  Kevin suggested we stop in on the parents so they could give us our wedding anniversary gift.  (20 years, the day before. Another post)

We had only been there a few minutes when Kevin's mom's phone rang.  It was her sister telling her to turn the news on because the bridge fell into the river.  We were skeptical because the aunt lives out on the islands, Kevin's mom gets confused easily, and seriously: what are the odds of that happening.

We turned the news on but it was only car and medicine commercials.  Curious and still skeptical, I checked the twitter.  First tweet: Skagit River Bridge fallen. Cars and People in the water.  And this picture: 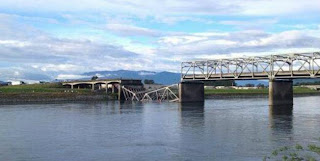 Only a few times have I felt that scared and sick.  We all travel that bridge daily.


I began to immediately worry about everyone I knew.  I texted my sister in law to check on my niece and brother.  They couldn't reach my mom because her telephone was busy.  At least we knew she was home!

We watched, mesmerized by the news footage.  It seemed impossible: the fall, the fact that there were only two cars in the water, and early reports of no fatalities.
I came home and turned the news on and sat and watched for over an hour.  The same reports over and over again.  Our phones blew up with texts and calls.


I obsessively checked the twitter, which is an incredible resource of information in an emergency.  You get updates in real time.  There were pictures and witness reports galore.

Then I checked Facebook.  My niece at Fort Bragg NC had posted, wondering if everyone was okay.  I replied to her that we all were and received an almost immediate response.

Kevin's niece posted that they were fine and I began to get status updates stating the same.  So I posted as well.  Within fifteen minutes, there were over a dozen likes from people as far away as the east coast and even Afghanistan.

It became a little community, watching as other friends and family posted that they were safe.  Each time reading them feeling a little more relieved.  It felt like when fireman, police, or soldiers encounter danger and afterward they "call out" to show that everyone is present and accounted for.

What an amazing thing the interwebs has become.  It was an actual lifeline during a time of crisis, provided news and confirmation of other's safety.  It made a horrible situation just a little easier to bear.

So, where do we stand now?   The freeway is closed because, you know: no bridge.  The arterials cannot handle the traffic so traffic is unmanageable.  The other bridges are being overtaxed as well, so that's fun.  It took Kevin two hours to get home tonight (thanks holiday travelers who don't have the sense to stay the eff home) where it normally takes 35 minutes.

They say a few months to put an Army Corps of Engineers temporary bridge in place and even then freeway traffic would be restricted.  They're fixing just the broken span even though the bridge needed replacement BEFORE the accident.  Thank you, sequester.

I don't use the word miracle seriously.  It was a simple miracle that only two cars went into the water and three people were sent to the hospital.  Two are out and one will be just fine. No fatalities.  How did that happen?  There are no explanations.

Also, the collapse was a combination of a semi-truck driver error and an old bridge.  I'm cutting the driver a break because he made a mistake.  He stopped as soon as it happened and is taking full responsibility.  I cannot imagine how god awful he must feel.

Remember: in times of trouble: call out. Tell everyone that you're okay. It's so easy to do these days.

For more information: google Skagit River Bridge.  Oh, and it's pronounced SKAJIT, not Skaggitt.  We forgive you for saying it wrong, everyone does.