So, you might have heard the Seahawks are returning to the Super Bowl.  Trust me, if you live in the Pacific Northwest and British Columbia, there's no way not to know.

Except if you're Kevin.  With three minutes left in the game and Seahawks down by over two touchdowns, he declared himself a Fair Weather Fan and went out to the shop to work on the racecar.  I started doing my chores and ended up folding laundry in our room while watching the game.

I am superstitious so I thought maybe this will change the game. (shut up) And it seemed to have worked.

Two minutes left and the Seahawks tied the game.  Unbelievable.

I even posted on the facebook "Holy wow Beast Mode"

He didn't answer, which was a little unusual but I thought maybe he was next door or listening and not able to respond.

And then he comes into the house and is on the phone, like the world is not exploding in excitement.  I walked out to say what the hell when he sits in his chair and looks at the screen.

He was talking to one of our Canadian friends that wasn't interested in watching the game so he don't know either.  I'm all "GET OFF THE PHONE!!!"

And then we won and OMG OMG OMG.

One of the major things about Russell Wilson, the quarterback, is his steadfast gratitude. If you're unaware of who this gentleman is, look him up.  He's the person we all want to be.

So, instead of celebrating on the field, the players huddled and gave thanks in prayer.  No one disturbed them, just stood quietly by and let them finish. They're going to the Super Bowl and they're huddled together in gratitude.  After proper thanks were given, then the celebration began.

This is who the Seahawks are. Positive. Humble.  Grateful. 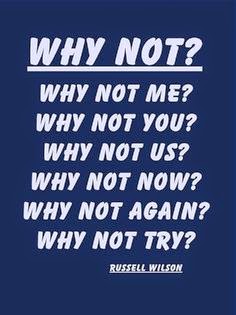