Karl, We Speak Your Name

It's usually the odd number years that are challenging.  It's just a theory, of course, so a person has no right to be surprised when 2016 continues to be so challenging.  Seriously, we have just a few days left, 2016, get your sh*t together.

A childhood friend of Kevin's passed away this morning. He's the first of the inner circle of friends to pass.  It was unexpected and gut wrenching.  Life is just feeling super challenging right now.

Like you do, a person revisits memories when someone passes.

When Karl learned Kevin and I were dating, (a bit of gossip stirring at the time) he just shrugged and said "Oh, okay" with a smile. If you knew Karl in real life, you just heard him say that. He had a childlike way to him, including many one-liners, bad jokes, and puns.

Karl waited quite a while to get married.  His was one of my favorite weddings because we just knew something Karl-like was going to happen.  To our surprise, he was pretty well behaved.  The last thing, the kiss, was what made us laugh.
"You may kiss the bride..."
"Oh, okay."  Then he kissed her like a grade-schooler would, with a firm grasp on her shoulders, a peck on the lips, and then set her back on her feet.  It was textbook Karl.

When his first son was born, they named him Justin.  Karl joked, albeit with some seriousness, that he wanted his middle name to be "Case".  I'm a little surprised he didn't win the argument, actually.

Karl was one of Kevin's street racing buddies in high school. I knew Karl from cruising when I was a teen. Karl was at our wedding. Karl helped us move. Karl would randomly show up at your house for a visit.  Karl always had something when you needed it. I can't count how many times I've heard "I got it from Karl" when the car guys are talking.

We'll miss you, man.  We thought you'd be around forever. 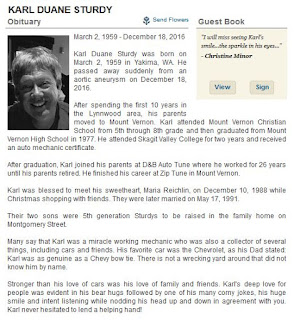 Oh, I'm so sorry. I love the kiss-the-bride story.