To Glitter or Not to Glitter?

Before we left on vacation in November, I was thinking about Christmas cards.  I even took them out of storage and put them in plain sight.

Almost one month later and here we are.  Still not done.  However, there are some finished and this is the soonest I think I've ever started.

Swistle talked about choosing Christmas cards (and then made her own. Omg, they're fantastic! look!)  It made me realize something about myself.  I have too many cards to choose from.  This is what spins me out every year.  Well, at the fact that it's just a daunting task as a whole.

I overthink things (I know, shocking) so I will spend time thinking "Well, they have kids so it has to be something Santa-ish" or "They're church people so choose a pretty church card" (I have a stack) or "They have dogs so send one of those"  (I have a stack of those also)  Too many choices, for real though.  I also tend to hoard my favorites, because reasons?

So, it occurred to me this time last weekend: Just send everyone the same doggone card and be done with it.  That's the mature and reasonable solution.  Am I either of those? not often.

Then I saw this and posted it to my facebook.  Now I have to do it.  Because I don't already make Christmas cards  complicated: 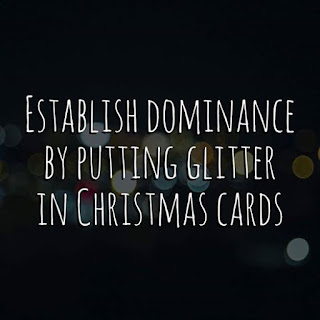 One of the biggest hurdles is that I get distracted by our address book.  It's the same one we've had for many, many years.  I believe I've written about it before. My attachment to this particular item is unusually strong.  In it, there are people who have passed, people who we wouldn't mind dead, many scratch-outs because people move, people divorce then remarry, business cards stapled in (just in case).  Finally, just for fun, it's not alphabetized by last name.  It's not how Kevin's brain is wired, nor mine really, so it goes by first name.  This is fine until one realizes there are tens of Johns and Lisas in our lives.  Those pages are crowded.

Just spending time browsing and organizing the address book on an annual basis is a time consuming project.  I should probably schedule doing that at a different time. Won't, but probably should.

I also have a list that I keep. Except this year, when I managed to print off an old list.  I am somewhat organized, evidence to the contrary.  But even with a list, I get distracted.  "Oh, I'll do neighbors first, then BFF's, then family."  Next thing we know, the list is half crossed-out and my ADD brain malfunctions trying to figure it out.  So then I make an updated separate list then rinse & repeat.   To anyone who ever thought, I wish I had a brain like hers, print out the paragraph and remember: no, you don't.

Why are you even?, you're probably wondering.  Because I do actually enjoy it.  I enjoy receiving them even more.  It's become a lost art and that makes me sad.  I don't want to contribute to that loss.  It is soothing to look back and then write out these cards.  I think I would miss it. Even if I do make it too complicated. 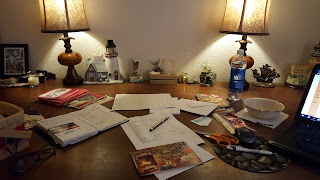 That is JUST how my Christmas Card Work Area looks!

I agree: I love to receive them, I don't want to see the tradition die out.