Lucy has become a high roller.  We spent $556 dollars yesterday to find that she's a) in perfect health, 2) she strained her left knee and c) sometimes dogs just don't feel good.  YEAH.

Monday morning she wasn't herself, didn't eat breakfast and just slept in our bed all morning.  I went to work for a few hours and when I returned, she wasn't feeling good and wouldn't let me pet her beyond her mid-section. She also wouldn't lay down on her sides, just lay in the sphinx pose.

I called our vet and they couldn't see her until THURSDAY.  I scheduled an appointment, just in case, then called every vet in two counties. Finally an unavailable vet recommended one in my hometown. I phoned and they took her first thing the next morning. Because now it's like 4:30 pm. Also, hooray small towns.

Kevin and I had the discussion of using emergency pet care but the cost is prohibitive unless the dog is in terrible shape, shall we say.  My sibling in-laws have taken their dog, the one that I don't like because it's mean to Lucy,  multiple times and it has been No Less Than $1000 per visit.  Don't get me started on how that feels like extortion.

Also, the above mentioned dog has cost them over $10,000 in procedures.  It's a boxer with papers and has all the health issues and behaviors that breed is prone to.  Plus owners who don't take care of her properly.  (people food, not trained to behave alone in the house, not trained to be around other animals)

Kevin and I discussed multiple times the "How much is Too Much?" and we disagree.  I believe Kevin would be a Whatever It Takes person if he weren't married to me.  In the past 60-days we've spent just under $800 on her and I'm getting a little bitter about it. (this is not a humblebrag but more of a @#$#!) This also leads me to the Just Because We Can Save Them, Doesn't Mean We Should. Quality of life and remaining life span needs to be considered.  And debt.  I apply this to humans as well.

Anyway. I didn't realize I had so much to say about that.

Lucy didn't eat dinner Monday night and she needed to be ON us. Not next to, but ON us.  So she slept in the people bed and she was obviously in pain.  To the point that Kevin slept on the bedroom floor with her for a while.  (I know, right?)  She was just as bad in the morning and didn't eat breakfast or leave the people bed.

Going to the vet, she was horrible in the truck, wanting to get UP onto the dash, trying to lay at my feet, trying to get in my lap. I honestly don't know how I didn't wreck my truck. Finally we got to the vet and she was all Perfect Dog.  Sigh.  She let the vet touch her hind-quarters and tummy and do all the necessary things without a peep.  But he said that it was clear her tummy was upset.  She had the tiniest of a temperature.

They kept her for x-rays and bloodwork and I had to go home without her.  UGH.   FIVE HOURS later, I went to pick her up.  After being together every day, all day for a year and a half, that was not my favorite.

Her blood work is perfect, her organs are perfect ("If you ever need something, here's your donor" the vet said)   Her spine is great, her joints are great, her tummy is fine.  She has a slight heart murmur but that's common for a dog her age.  He said that if he didn't know the demographics of the dog, he would have bet that she was a much younger dog.

While this is nice, I'm yelling in my head "Then why am I here!?!"     The most he could find was inflammation in her left knee.  I "jokingly" said that we were here because she wanted attention and he said something like "maybe."  Double sigh.  Except she was really not feeling well and not acting right.

So, it's a good guess that she ate something that didn't agree with her and also hurt her knee hunting and that it just was coincidental. So, whew.  I also think she's nine and we're seeing Old Dog Behavior.

I brought her home and she was SO HIGH.  Omg, so high.  I'm going to hell for laughing at her.  Thus the social media posts.  Here's my favorite:

She slept with us all night, like a people between us.  Not a peep nor a movement.  She slept all morning on the people bed in her blanket, while I worked.  She whined at one point and I checked on her.  I think she didn't know how to get down. She was still a little high.

Also, I let her outside on the deck and she didn't quite know what to do.  I let her in the yard and she walked like she'd never experienced grass before, lol.  Now she's sleeping on the deck and will randomly wander the house.  She's whined twice and I think it's because she can't see me.  GREAT.  I hope that's not going to be a habit.

Also, her whining has been Next Level today.  It's like she learned from the other dogs at the vet. Super.

Meanwhile, we're supposed to take it easy for a few days so I'm skipping walkies until Friday.  I asked the vet about the walkies suggestion and he said that it was clearly working so keep going. A little part of me was hoping for "No, that's too much.".  Not that I hate it, it's just work sometimes because I can't just walk out our door for a walk; we have to go somewhere.

In the end, we found a new vet because I liked his approach.  He offered to see her for free if she acts up like that again in the next little while.  It's a small town vet office like you would see in the movies.  Her other vet is a larger, newer clinic and doesn't have that same vibe. 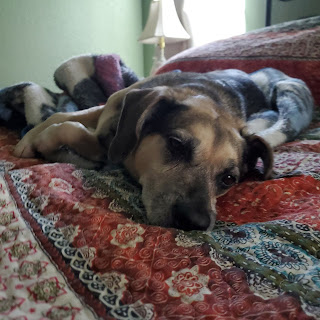