Unless the powers-that-be say no for some unlikely reason, it looks like I will continue to work from home in the fall.  Or worse case: a hybrid schedule.  I'm relieved and a little nervous. Because that's much more responsibility than during the pandemic, as I would have a full caseload plus more.

Meanwhile,  Kevin was really relieved; his anxiety likes having me safe at home AND available to the parents. Also, I've tried to People this last month and I believe I've gone feral.  I off-handedly dropped an  eff-bomb to my job partner in her office, which is located in an old church.  Well done, me.

Now I'm looking at my office through a workspace eye.  It's going to be my next big project.  Sshhh, don't tell Kevin.

I bought grey paint when I bought the orange paint.  It's more of a silvery-white, I think.  Of course, it's too hot to paint right now but I have it for when the mood strikes. I keep telling myself that I can just do one wall at a time but my brain is all "DO IT ALL OR NOTHING."  And yes, I said that I would never paint the office.  Don't listen to me, I don't know what I'm talking about most times.

Now I'm also considering refinishing my desk.  It is a capital "B" big project and I would have to take apart my entire work station. So that's daunting and will require some scheduling.  Yet, still want to do it. I will eventually run out of furniture to refinish.  Or so I keep saying.

So, because I can't do either of those things until this ungodly heat goes away, I'm looking at my bookshelves.  They're stuffed and unbalanced.  My to-be-read pile is ridiculous and my plan is to diminish it this summer. Plans, however, do not help in the moment.

I have a separate bookcase that holds paperbacks, oversized books, and some hardbacks.  I considered emptying both bookshelves and restocking them into some sort of order.  Right now, they're sorted by author, unread, and one random shelf of books from my childhood.  (liberated from nostalgia totes in Monica's Closet.) Plus one shelf that had racecar junk stored on it because I've been too lazy to deal with it.  It's a top shelf so under-utilized and out of my reach/eyeline; that's how that has been allowed to occur.

What had happened was, I re-organized the big bookcase.  I stuck with the previous organization of grouped by author, non-fiction, and unread.  I might still sort by color within the author groups but we'll see. The alphabet brain is fickle.  I also decluttered tchotchkes that had gathered on the shelves.  Why, why, do I have so many bookmarks?

The smaller bookshelf needs refinishing. I know, I have issues. It was built by my dad when I was married the first time, I think.  He was a lot like my father-in-law where good enough is good enough.  Until then though, I removed books that I'll never read again and consolidated older paperbacks onto one shelf.  If I'm being honest, I would rather be rid of the small paperbacks but that would require replacing them with hardbacks and yep, that's where my brain spun out.  So, they're stacked on the bottom shelf for now.

As a result of this shuffling, I looked at the bookshelf in the living room and the books on top of the weird cupboard in the hallway.  I relocated some books to "appropriate" shelves and culled even more books.  Those were books that I was "meh" about but kept anyway, books that I have and will probably never read.  (Why do I keep getting Jodi Picoult and Anne Tyler books. I'll never understand)  Inspirational stories that were popular years ago and a teen bible.  (long story about that one, it wasn't mine)

Now there's a box of books in the laundry room, creating everyone's favorite thing: clutter.  This is the plan:

There is a little neighborhood library on the way to the park near-ish my house.  I have many books for it, too many to drop off all at once.  I just have to remember to take a stack each time we go and deliver them.   It's by the road, at the end of a long-ish driveway and it feels weird to pull into someone's driveway.   As I've mentioned before, I live rurally so pulling into someone's driveway feels sketchy but the existence of the library indicates the unlikelihood of being chased away.  At least in the city I used to work in, these little libraries were next to street parking.

But I did it, and yes it felt weird but you can't see the house from the road so it felt less conspicuous.  And it's an adorable little library: 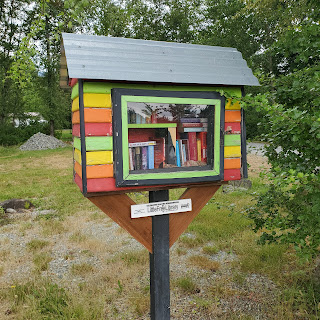 Now the fun part was peeking at the books to see if the readers have similar tastes as me.  I was fearing seeing cookbooks or religious or political books or something random.  Nope, there was Stephen King, Nora Roberts, Patricia Cornwall, sci-fi, and cute little self-help books.  Whew!  So I dropped off my little contribution and even snagged a book, based solely from the title: 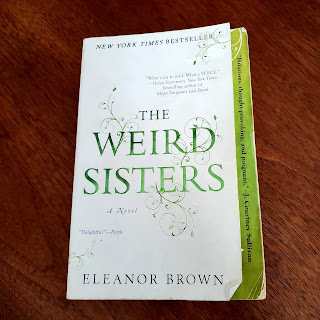 That's progress but there's more to be made.  Kevin wondered about breaking down Lucy's crate because she refuses to sleep in it at night.  But while I'm working, she's all:
In the Fall, I will need some flat, uncluttered workspace and her crate will provide it.  Thus the top shelf of the little bookcase with it's stuff  that used to be on her crate, instead of books.  Also, all my processes are supposed to be paperless so the little oak file cabinet that doesn't fit anywhere should be useless.  Especially if I ever finish the photo project.  (shush, I will. Eventually)

I'm going to pull everything out of Monica's Closet and the racecar closet when it's not Hades outside. (the office gets HOT, because it's never in the shade)  My goal is to consolidate as much as I can.  We are doing something different with the racecar since the border will be closed until at least Fall.  This results in most of what's stored in it gone.

To accomplish this also means I have to finish both the photo albums and the nostalgia projects.  Sigh.  My goal is before school starts again.  So....next month.  Double sigh.

AND THEN, I read this on the social media and my brain started to whir.

Favorite part: "It's existence is currently being debated."

What a cute little free library!!