This Is Not The Fun Part

We are doing a new build on the racecar. (I promise this isn't all racecar)

In order to do this big project, everything engine related went for sale.  This creates an endless series of phone calls, texts, paypal transactions, two separate trips to the bank, and paperwork.  Oh, and shipping. I hate shipping.

Somewhere in there: a new laptop was purchased because the old one wasn't up for the task.  I admit, that part was fun.

AND THEN, the stuff begins to arrive.

If you think Surely is OCD, let me introduce you to Kevin.  In this case, he's using his powers for good but again: OMG.

There are the originals - receipts, manuals, instructions, warranties.  Then there are copies.  Some things we laminate because of high-usage.  This project has made me scan everything into the cloud as well.

There is a specific binder for all the master documents that is kept in the house and another binder in the shop.  (if he asks for one for the car trailer, it was nice knowing you all)

This is the point we are right now.  I've copied, scanned, laminated all.the.things.  And there are FOUR MORE SHIPMENTS to arrive where I get to do it all again. #goodthingIworkfromhome

(this is #firstworldproblems and Yes, I am whining)

Finally, because we are working with a new engine builder, there is the marketing part.  I'm teaching Kevin to use email and making sure his email is set-up with signatures, etc.  He's done well but try teaching that stuff over the phone while he's running heavy equipment.  I need a Certificate of Proficiency.

The builder sent us a truckload of swag, which is super fun but what do we do with a six foot by three foot banner?  Well, this what you do: you hang it behind the racecar, take photos then go onto social media to thank/promote them.  You email them directly to thank them.

And Kevin hates that part. He thinks posting on social media is bragging and hates the attention.  Well, buddy, this is how we do things now.  Also, your FRIENDS enjoy seeing this stuff.  One of which has already phoned him in response.

My point, beyond whining, is that it's not just all fun with this level of racecar.  It's sometimes an actual job.  Earlier today Kevin mentioned that this was the fun part and I hesitated for a millisecond with an "ummmm" This is the fun part for HIM, I clarified.

Right now, it's work for me.  When it's done and we're doing racecar stuff with our friends, then I will have forgotten all about this.  It will be fun then.  Not as much now.

Oh, and I forgot: taking all the packaging and boxes to recycling.  But not yet, because reasons. 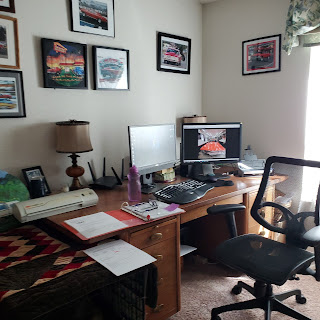