Shades of Grey - What Did Surely Take Apart Now?

This is Version Number Whatever of this post as it's taken a while to complete.  Regardless, the first line remains accurate:

As I'm writing this, I'm looking at a mostly painted office.  I know, I know, I said I wasn't going to paint the office and then I....like....did.  There is still one more wall to finish and the joint between the wall and ceiling where I can't reach.  This is Kevin's favorite part...not really.  It's his fault really, he married a short person with impulse control issues. 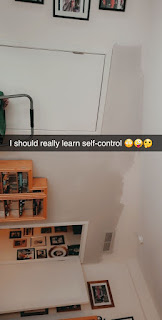 There is giant furniture in this room, some of which are bolted to the wall because earthquakes are a thing. So this project was Difficulty Level Eleventy Million.  Also, there are tens of photos of racecar and racecar related things.  I had to do the same thing I did when I painted the photo wall: take a photo so I knew how to put everything back.  I'm taking today (now three days) off because by the time I finished yesterday I was ready to burn down the house.  Well, and I ran out of paint.

This project disabused any thought in my alphabet brain that I want to refinish my desk.  It weighs well over 100 pounds and measures 6-foot, 4-inch by 38.73 inches.  It's an immovable single-size bed.   I haphazardly painted around it because I could only move it slightly away from the wall.  So it seems unlikely that I will refinish it.  Narrator: "She's absolutely going to refinish the desk."  Narrator #2: "She bought stain and supplies yesterday." 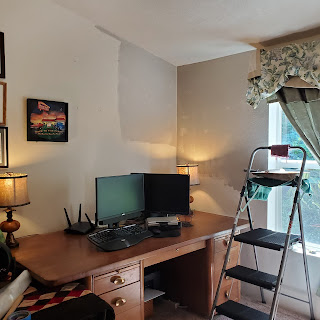 I chose a grey color because that was what the internet said was a good color for an office. I was hesitant and I thought I'd chosen a silvery white.  I did not.  It took painting most of the wall before the panic of having made a horrible mistake passed.  (the first stage of painting grief)  Fortunately, it's the shade of grey that changes color with the light.  It looks silvery white, grey, and sage as the day passes. So, I guess that's a win.

Most of the photo frames are black.  Except five of them.  Now they have to be switched out, because alphabet brain is constantly pointing out that they're different.  Kevin just mentioned that he would paint them black for me because apparently I'm not to be trusted with spray paint.

What started this whole thing, you might be asking.  Well...

This house is a two-bedroom cottage so I'm puzzled why there are two closets for one bedroom. (aka: the office)  One is nearly big enough to be a walk-in closet and the other is slightly larger than standard size.  My guess is the main bathroom created a deadspace so they made it into a closet.  But that's just a guess.

Anyway.   There are two closets.  Tap dancing jesus, I can't stay on topic.

One is the "racecar closet" where we keep parts boxes, actual tires, and all the stuff we need for the racecar that can't be stored in the shop, car, or trailer during the off-season because we live in the beautiful PNW where it's always damp.  (firesuit, helmet, parachute)

Luckily for me I like the smell of new tires, because it also has a shelf of extra bedding.  It's the extra blanket for our bed during the winter, a quilt to use outside, our wedding quilt that doesn't match anything, (hello 1993) and the comforter that we use when "camping".  And pillows.  It's like sleeping at Les Schwab or Discount Tire, depending where you are from.

The other piece of this puzzle is that Kevin sold the racecar engine, creating the need for culling nearly all of the boxes in the closet.  Right this second, there are not tires stored in there either.  So it's nearly empty. Yes, I am thinking about the nap closet idea.  But it will be full again in a few days/weeks.

Then there's Monica's Closet.  As always, it has been allowed to be a bit of a mess. An archaeological shit*tshow, if you will.  I will say that it's better than it's ever been in the past but it's time to delve back into it and get it better organized.

But here's the problem(s):  There are some things that made it into the racecar closet that aren't necessarily racecar. Kevin bought moving blankets for projects out in the shop.  They are a pain to fold and store. (so heavy!) Also, there is a smallish box of extra flooring, and a large suitcase.  By some mystery of Tetris, I've managed to fold the blankets as small as possible, put one suitcase into another, and slide the flooring box to the back of the closet.

Meanwhile, back to Monica's Closet.  I've pulled out the unfinished photo album project and put it into the living room.  If I put it out there it will bother me and I'll finish it.  UPDATE: this did not work and they are all back in Monica's Closet. There is also a box leftover from the nostalgia box project with scrapbook stuff.  I believe that will languish in that box for another little decade while.  #SorryNotSorryHeirs

I have a big tote of wrapping stuff. Gift bags, gift boxes, tissue paper, bows, ribbon, greeting cards. It's a little like the hallmark store clearance rack fell over into this tote.  Also, I hoard envelopes.  It's a habit from back in my school admin days.  I would bring them in for the kids to use. (handy tip: extra envelopes, old greeting cards, and junk mail are great to give kids.)

It took about thirty minutes to sort through and consolidate/discard.  Someone at the second-hand store is going to get a treasure bag of greeting card and envelopes randomness.  Then I gathered all the giftbags together to go with them. The Cindy Spelling Starter Kit, if you will. The odds of me using any of this are so slim now; we are just not in that life stage.  I will keep the tissue paper because it feels like I never have it when I need it. (those feelings are lying, mind you. I have plenty)  Yet, that tote remains full. #goodeffort

Today Kevin promised to help me finish in here.  It's 1:00 in the afternoon and I've reminded him once.  My guess is he will wait until the end of the day when I can't care anymore.  But I really want this project finished so I can focus when it's time to actually work tomorrow.  I think I will do the trick that motivates him every.single.time:  I Will Do It Myself.

Summing up: Office that I said I'd never paint is 75% finished.  Desk that I said I wouldn't refinish is still in the Maybe category.  One closet has been emptied and nearly refilled and Monica's Closet remains the adorable sh*t show it will always be. Actually, it's better, it just never Feels that way.

Oh, and related side story: the other day I went to get more paint.  Usually I have a photo of the paint label in my phone. (#nerd) Did I?  Nope.  Okay, no worries, because I have an account there.  Did that paint code get entered onto my account? that would also be nope.  Instead of doing the mature and reasonable thing of waiting to get the correct paint code, I just chose the color I thought it was.  Now wait, there is logic. Sorta.  See also: short person with impulse control issues.

The remaining wall is the biggest/tallest wall.  However, it is covered by a giant bookcase and has a door and is partially blocked by another door.  So it was a big Whatevs if the paint doesn't match perfectly.  What did matter is that I didn't know if I had enough remaining paint to do the edges on the walls with the original color.  It was a fun lottery to play.

Update: it's totally fine.  I think you might notice because I told you but anyone who doesn't follow this silliness would notice.  The difference in shades is the new one has a hint of blue so it's slightly lighter.

Also, my plan did work: Kevin spent an hour - on the phone for most of it - painting where I couldn't reach.  After decades together, one figures out how to get cooperation.  Now I've asked him to just leave me be for a few minutes so I can finish this and one other thing.  "I don't need you" he says jokingly.  SIX MINUTES LATER he sheepishly comes into the office needing help.

Now that everything is put back together, I've organized my workstation after haphazardly throwing it together 1.5 years ago, and it looks SO NICE in here, I'm betting that the Universe will intervene and I will have to return to my work office in the fall.

But that would make it easier to refinish my desk.... 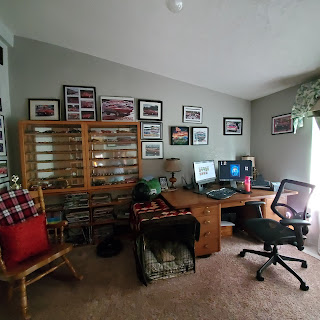 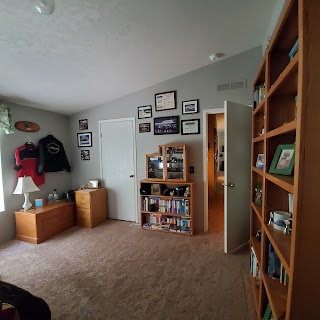 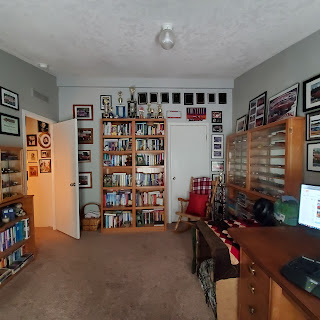