or any nonsensical stuff that might appear here over the next little while.

I managed to miss the last step on the stairs at work and broke my ankle.  Broke it ugly, eight screws and two plates ugly.  Bedrest for eight days ugly.

This kind of ugly: 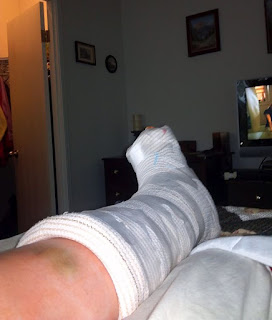 I broke it on Monday morning, had surgery on Tuesday morning, came home Wednesday afternoon and now I'm chillin here at home.  Chillin being defined as stuck in bed or in the recliner with my new friends painkillers and remote.

Kevin is trying to just roll with this but he's overwhelmed.  He's just so used to me being around getting stuff done, that having the exact opposite is a little disconcerting.  I have  to concentrate just to eat.  Did I mention painkillers?  They make me itch and loopy.  I am just as frustrated that  I can't just get up and do something as simple as put the dishes away.

Oh, and I can't shower.  Yeah.  That's hot.  I did shower last night (against the rules) but it was such a process that it left me exhausted and frustrated.  I guess I'd rather be grimy. (such a lie)

I will hopefully get a big girl cast on next Friday afternoon then I can get around a little more and shower.  I still won't be able to walk  for at least six weeks from next Friday.

Right now I have a walker which isn't as awful as I'd imagined.  I don't think I could have done this with crutches.

I am getting one of those strange little scooters that you kneel on with the broken leg and push with the good leg.

But I think if I get one of those, I need a helmet and elbow pads.  I can't even maneuver stairs with two good feet.

Ever since you fell, I've been thinking about how dramatically things can change with an injury. Look at all the trouble a "little fall on the stairs" is causing! It's a little alarming to think of it. The missed work! The medical equipment! The bills! The chores not getting done! The long recovery!

I sent you books but I think I should have sent TV shows instead: I'm remembering how on painkillers I was not realllllly able to focus on things like PLOT and WORDS!