Remember I said that I had ideas for the garden?  I'm pleased to say that they are done.  It is extremely helpful to have a husband who has access to any kind of materials you might want. Even if he is a little skeptical.  The smoke from the West Coast wildfires arrived yesterday, adding a little panic to getting this project finished.

We have mostly eradicated the ivy.  I still see little signs here and there but it's where I don't care if it grows again. Unfortunately, we had to use the weed killer that is bad for humans and the environment.  Nothing else was having any effect on the ivy, other than annoyance.

Then I had to remove the dead ivy, which was super fun.  *shaking my head*  The reason the ivy was allowed to grow in that area was that it covered a not easily accessible, steep part of the hill.  So even with my newly built stairs and rock cascade to balance on, it was a challenge. For the part on the right side, I climbed up the hill, sat on my bum, then slid on said bum to the bottom of the hill when I was finished. 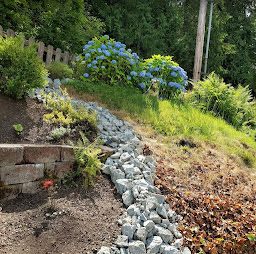 Now, I had four pots of perennial plants that were along the house.  It was a struggle to get anything to grow there because the heat would reflect off of the house onto the plants. And, if we're being honest: watering plants isn't high on my list.  Also, Kevin didn't like them there because it felt like clutter to him.   (he's cute, that's why I keep him around)

Two of these plants were lavender.  I have a big lavender bush in the rock garden that makes the bees very content.  Kevin remarked on them and it clicked in my head that I should plant them instead of having them in pots.  But I'm out of space in the garden.  Like, seriously, out of space. The other two plants were supposed to cascade out of their pots but never really achieved that goal.

My original plan was to plant what GiGi suggested but then the End Times came and I didn't want to go to the nursery.  So, I decided to use what I had.  A novel idea, I know.  With the theory that in proper homes, these plants will now cascade down.

The bank is clay so anything I plant has to be hardy. I know these plants have survived my neglect so we should be good. Also, this is where Kevin comes in: he brought topsoil and compost to help facilitate the success of anything planted. The bank is also held up/in by ferns.  Sadly, it's the time of year that the ferns are beginning to die but they are staying. When they're healthy, they're beautiful.  I also uncovered a hydrangea that I had transplanted and forgotten about. Now that it's uncovered from the ivy, it will grow next season, theoretically.
I'm mostly satisfied how this turned out.  I'm waiting to see what the winter weather does.  It's possible that a good rain or snow will bring the compost/soil down into the yard. Kevin says it won't but what does he know? He's just a landscape materials expert.
I messaged a photo to my BFF and they said "Almost done!"  It stalled me for a minute then I looked at it through their eyes.  That's where having rocks border this section came to be.  It did look unfinished.  I don't have a photo of it because when I use the snapchat, I forget to take a real photo too.  By adding the rocks, it will keep the grass away and hopefully be a little barrier to the weather. I might still add a few around the border, I haven't decided yet.
Okay, that was a lot just for that part of the garden.  Let's talk about 1,000 lbs. of rock.
It took almost 1,800 lbs of rock to do the original cascade.  Then Kevin brought another 500 lbs. to do the ivy section and to help fill in gaps.  He was a little surprised when I asked for MORE.  "Are you SURE?" he asked.  "I don't have time to help you" he said.  (he's in the middle of a big project now that the house is done)  Yep, I am ready.
Thursday night he brought home 1,000 lbs. of rock.  The smoke was already settling in but he got home late so I couldn't start until the next morning.  At 8:00 am, I was out there with a wheelbarrow and stubbornness; racing the incoming smoke. Luckily, my plan was for the cascade to not be as wide as the original one so the work went remarkably fast.
Two and a half hours later and I was done.  Kevin phoned twice to make sure I was still alive, had all my fingers, and remembered to go inside before I died.  Lucy sat in the truck the entire time, waiting to go get treats at the coffee stand.  I have a weird support system.
Much like the first time I did this kind of cascade, I started at the bottom.  Stacking rocks as they saw fit and sort of planning my way.  Mostly, I try to let the ground tell me where things should go.  I've had this vision in my head for YEARS so I was really hoping it would turn out as imagined.
Then I had to back up the truck to the top of the hill.  This part was more tricky than the first cascade because I had to unload in the road, walk through a gate and a few steps more, then place/bowl the rocks down the hill.  Like before, this part of the hill is unaccessible.
Like before, I made backstop of larger rocks about midway and had mild success.  The top is too steep to crawl down so I did the best I could, knowing that I would have to climb up to re-arrange later.  I took no photos because I was so focused on getting done before I needed my inhaler.  Know that there were rocks in the yard below, rocks in places I didn't intend, and a bit of cursing.
Wonky angles, I know.  I wish that I had documented more but you get the idea. In the before photo, the dead parts are from the eradication of the dreaded buttercups.  In the during photo, I had started the cascade but not finished the ivy replacement part.
It turned out mostly like I'd hoped.  The plan was to go trim the dead ferns and weeds but the smoke is making that impossible.  It will also look better when we have the landscaper weedwhack one last time before winter.
Imagine the ferns growing along the top then the cascade wending it's way down through grass, ferns, and allowed dandelions.  (because bees are more important than grass)  I'm also wondering about solar lights/fairy lights along that cascade.  We'll see.
Mostly I like how it transitions from structured English garden, to less structured, to wild.  That was my vision/hope.
I'm super happy that this is done before the Fall rains arrived, otherwise it would have been MudFest 2020.  It should be nice enough for a while that the grass  and some of the ferns will regrow before the first freeze.
If the ivy returns after all of this work, then I concede defeat.
Posted by Surely at 5:09 PM

It looks great! I love that you found the hydrangea that you forgot about. If the chemicals don't keep the ivy from coming back; persistence will. I'm about ready to go the chemical route with the blasted blackberry bush but I'm afraid it will take out everything else. Just wander out there every once in a while and if you see a stray piece of ivy; yank it out and throw it in the trash (not the yard otherwise it will take root there).