I've decided that now I'm home forever,  I might as well excavate Monica's Closet. Like, for real, though.  Usually it's an organize things into boxes and move on with my life.  It feels like it's time to really, really, really go through stuff.  I blame The End Times.

It's been about a year since I've tried to tackle this task.  Usually it happens around the holidays because I have to put all the holiday decorations up and find the Christmas cards.  But time is a construct and nothing matters anymore.  I may put out Christmas decorations. HalloThanksChrismakuhEve.

Like always, I had random crap piled up around the storage totes.  Birthday cards, picture frames, empty boxes, projects that I'm going to get to later. (I am. Am too!)

Because I'm an adult, I had a debate about whether or not to keep empty boxes.  The holidays are coming and there are eight children in my family.  Standing there, something popped in my head that my friend used to say when we were younger: "They sell those at the store every day."  So, into recycling the boxes went.

I have a small tote of electronical things.  Phone cases, cords to any electronical thing that ever existed, ear buds, old tablets, etc.  I dumped it out onto the kitchen counter and sorted it.  Because technology is expired before it's even released, most of the stuff is junk.  All the cases, many of the cords and a few odds and ends also went into recycling/goodwill.

Fall decorations were in two totes.  I've emptied them both and one of the totes is going outside to the tool shed.  This is going to create a Survivor episode for Fall decorations in two months.  One tote per season seems reasonable.  Except for Christmas, don't be silly.

Because I've worked organizing everyone's photos except for mine, there was a small box of unsorted  photos.  I've set those aside for my next project after Monica's Closet.

As mentioned in the above post link, there are a few totes of nostalgia. Well, three large totes. They've moved from house to house to house since 1990-ish.  It's well beyond time to go through all of that and distribute it to somewhere other than here.  Maybe the kids will want something, maybe it will all go to goodwill.  We'll see.

There is a train museum literally minutes from our house and I have a box of trains, tracks, etc. that I'm trying to give away.  I emailed once (the only way to reach them) with no success.  I've just emailed again with hopes someone will answer.  It's a long story but I ended up with lots of trains years ago, including vintage train sets.  They've been in our closet for years and it's time for them to go.

I have a nearly two foot tall, plastic snoopy piggy bank that has travelled everywhere with me since childhood.  It feels like it's time for him to live somewhere other than the closet. But I'm having separation anxiety.  I don't remember ever not having snoopy with me.  Years and Years ago, it was filled with change and we took it to a coin exchange to pay for something racecar.  We were competing for a championship and broke a.f. and needed something.  Maybe I should put him up with the trophies, he did the work.

Kevin is a non-sentimental human.  Get rid of all.the.things he says.  Until I start to pull out his old hot wheels, GI Joes, and records.  Then he's awash with happiness as he remembers.  Some of his hot wheels are going to Nephew (not Five, but Nephew) the records are going to C2 Nephew, our bohemian child.  The rest is already packed up again and snugly stored back in the closet.

Hmm, what else?  Well, here are some of the treasures I've found:

A perfume bottle...it was in a small box labelled Tony.  Now I'm sneezy and wheezy.  As he ended up in juvenile detention, this seems appropriate.

These cuffs from high school.  Redneck punk. Cafeteria utensils.  Yep, actually wore these. I've mentioned the IDGAF was strong in me back then. 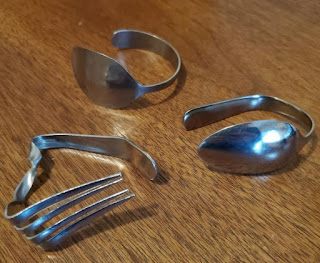 I found my childhood glasses, in their original case.  I wore these for years and years.  My mom said because I wouldn't wear anything else - which could be true - but I suspect that we were also poor and glasses are expensive.  Strangely, I can read with them.  They're THICK, omg. I never post personal photos but look: 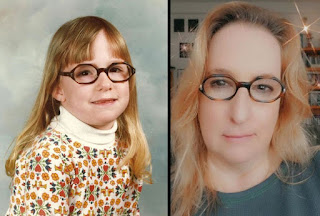 I still have some stuffies from my childhood.  They are, um, deteriorated and not just a little bit terrifying.  One is a knock-off Oscar the Grouch.  One is a Snoopy stuffy that I've washed in hopes of resurrecting. There is a legit Raggedy Annie.  Then there's this terrifying little bastard: 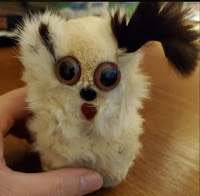 This guy actually makes Kevin nervous and I get it.  So, here's his origin story:  My paternal grandmother, my favorite who passed when I was five, always gave me gifts.  Not big things because she wasn't well-off but things like books, stuffies, Red Rose Tea figurines, pretty things.

This guy was covered in rabbit fur, so he was super soft and he was the perfect size to fit in my little hands.  And here's where he meets a troubled childhood and a kid with sensory issues.  I think his ear was the first to go.  I don't remember the tongue but he must have had one.  And he didn't used to be bald.  I petted the very fur right off of him.  So he's bald and looks like he has a terrible skin condition. There is no resurrection story for him.  Yet, I can't bring myself to toss him or give him to Lucy.

Okay, status update. I've texted photos of stuff to my childhood bff, Nephew and the Nieces.  Some of the stuff is going to them and some of it to the goodwill.  Childhood bff was all "HARD PASS" on having letters we wrote to each other from middle school.  The kids are each taking some small things. Another sizable portion is going into recycling.

I'm to the This Is Never Getting Done phase.  The goal is to consolidate the three totes into one.  Right now this seems insurmountable. But I already have two totes empty and one overflowing.

I have a plan.  Everything is kind of piled into the overflowing tote, I bought two scrapbooks today after going to recycling, and will put everything possible into those.  Hypothetically, those scrapbooks can then go with the photo albums and the items remaining will fit into one tote.

I'm done for a few days though. My psyche can't take anymore nostalgia.

And that stuffie keeps dead-eyeing me.

Ug, I need to do this; maybe this post will motivate me. I did get rid of a fair amount of stuff when we moved---but at some point I stopped sorting and started just cramming stuff into boxes.

I have two big boxes labeled Sentimental. Including a bunch of babyhood/childhood stuffed animals. I don't think I can. I think my heirs will have to do that part.

I am cracking up at the cafeteria-silverware jewelry.

I also know, deep in my heart, that no matter what it is; 9 times out of 10 my child won't want it or want to have to deal with it when I'm gone.

With that being said, Man-Child's lovey (blanket) and his old, ratty, chewed up and well loved Pooh Bear aren't going anywhere. If he wants to throw them out then he will have to do it; because I just can't.