We Paid Extra For This

In my drafts folder I have a compilation of Raising Parents stories.  And then this happened.

Kevin's mom turned 81 years old yesterday.  We didn't expect her to live to her sixties so the jokes on us, I guess.  She has outlived all of her siblings as well.

If you're a long time reader, you know that Friday Night Dinners used to be a thing.  That "ugh" feeling you just felt? HOLD TIGHT.  If you're a new friend, the family - who essentially lives together - used to go to dinner Every.Friday.Night.  It ended with Covid, so #thankscovid.

And yes: it was Tuesday.

In what sounded like a little bit passive aggressive/manipulative request: my m-i-l wanted to go out to dinner because this might be her last chance.  While that is true, I'm not appreciating the approach. But that's not even the worse of it.

She has a GI tube and isn't supposed to be eating.

She's on oxygen and refuses to wear it outside of the house most times.

She's unstable walking and refuses a cane or a walker.  Her husband just says she's fine and lets her stagger around. Literally stagger.

It's been long established that no one enjoys these dinners and yet we continue.

Super fun, is what I'm saying.

Out of the four "children" three of them were working all day. Those three got out of work a little early to make this happen.

When it was time to leave, my f-i-l was IN THE SHOWER.  The ones who had asked for this to happen were not ready and seemed absolutely surprised that we were going.

We all took separate vehicles because no one will ride with my f-i-l anymore.  I don't spend time with the b-i-l, and the parents weren't ready so couldn't ride with the b-i-l as what usually happens. #sorryenvironment

We arrived at the restaurant and as Kevin and I are crossing the parking lot, I realize the parents weren't there.  They would be parked in the disabled parking space so it's obvious.  Kevin went into the restaurant to check with his brother.  Again: thank you covid for "allowing" me to stay outside to wait.

While he's checking, here comes the parents. They had gone to the wrong restaurant.

THIS IS GOING SO WELL. WHY DID WE STOP THIS FUN THING.

I said something like "This is Super Fun, why did we stop?"  Kevin was in his feelings, having realized fully the mistake that was happening, and said "Don't start."  Too late, buddy.

We began to walk into the restaurant, Kevin goes first to guide his mother but isn't walking beside her because he's spun out.  My f-i-l stops about ten feet short of the door to let me go; leaving his wife staggering/shuffling through the door.  I admit that I was a little snappy and said "Please go with her, I am fine."

We get to the table and there is confusion about who is sitting where. Every Time. EVERY TIME. Every time.  Just sit dafuq down like normal, regular human people.  Bonus: the b-and-s-i-l were Already Seated.  I am considering going back to the car and I haven't reached the table. Meanwhile, the b-i-l is super loud, drawing attention to the table from other tables, and the waitstaff are trying to maneuver around everyone as they solve this unsolvable puzzle.

The b-i-l has two personalities in restaurants: Super Charming Guy - which he is NOT or Curt Unsatisfied Guy - which is his default mode.  Spin the wheel, which one do we have tonight?  Super Charming Guy.  Because the waitress is the girlfriend of someone he works with so he is faking it.  Please take all knives and forks from the table, thank you.

The m-i-l chose Olive Garden, I don't know why.  Oh, and this is my favorite thing right now: 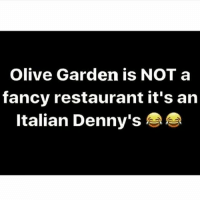 But it's Olive Garden: pretty straight forward and been there tens of times.  Still, she needs to read the menu. Sigh.  AND she forgot her glasses. DoubleSigh.  The f-i-l remains seated and does not go get her glasses.  Kevin, in a rare show of frustration, stands up and asks for the keys so he can go get them.  "It's not locked." the f-i-l states. 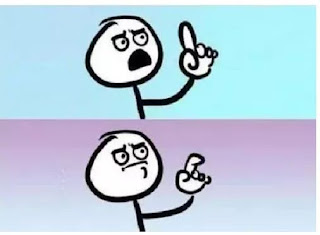 Meanwhile, my s-i-l is doing what I usually do in this situation: "At this restaurant you usually eat A, B, or C"  Nope, she wants to see the menu. Remember: she's not supposed to eating anyway so GAH.  Kevin returns, gives her the glasses, and she forgets to look at the menu.  When prompted, she wonders about getting a steak.  Yep.  A steak.  The b-i-l tells her no, which surprises me, until he says "I will make you one, you'll like that better anyway."  *internally screaming*

After this whole THING, she decides to split a meal with the f-i-l.

Now it's my second least favorite part of Family Dinner: waiting.  Awkward conversation because there are no subjects that don't offend the b-i-l if I participate.  So I'm looking at my phone under the table until Kevin notices.  Finally my s-i-l asks "What's new with you?"

I had three responses squelched in my head because WUT.  I mustered a "Every day is the same day" trying to make light and it landed in the middle of the table with a thud.  I'm still puzzling what to say...I mean, NOTHING IS NEW.  You know Nothing is New.  I just....and I didn't even ask a follow-up question as per polite society because WUT.

Everyone but us ordered mozzarella sticks.  We didn't because we just had them three days ago and we're trying to make somewhat smart choices with our eating.  Does this stop the b-i-l and m-i-l to continually offer Kevin them? No. Does it stop them making put-out, uncomfortable expressions when he declines? Also no.  IT'S NOT A JUDGMENT, FFS.  We just don't want them.

So, meals came and we eat.  I just keep my head down and eat.  I can't with his mother and all that. I'm just waiting for her to choke.  There's a little bit of awkward conversation and it seems to go without drama.

Oh wait, I almost forgot this part.  It came up that this dinner was not as great of an idea as the m-i-l thought it would be.  She lands with "Well, I always think it's going to be my last."  I swear, SWEAR, the restaurant hushed when she said it.  Then she continues that she tells the f-i-l every Christmas that it's going to be her last Christmas and so far, she's still here.  ....I....I don't know how to respond to that. Even Kevin, who is usually quick thinking was all "Ummm, well then."

But back to the bingo:  Every time, regardless of restaurant, the b-i-l complains states that the portions are too small.  Every time his wife orders a margarita and he always calls her a "slush", which is something Kevin used to say but he appropriated.  Every time the f-i-l reacts to being offered salad like they've laid radioactive waste in front of him.  OR says "Orange Pop!" like a child when asked what he wants to drink.  The one bingo square that didn't get marked is the b-i-l ordering a steak and being high maintenance guy about it.

Now, for some reason I will never understand, the m-i-l and the b-i-l always linger at the table long after it's time to go. It's so rude to the servers and to the folks at the table who don't want to be there.

At this point, every time but specifically this time: the m-i-l is exhausted and overwhelmed, it's way past time to not be there. Yet we linger.  At one point, Kevin teased his mom and it didn't land well.  I said "Stop, look. She's overwhelmed and we need to go."  Out of the corner of my eye, I saw the b-i-l start to react and he stopped. Thank you, universe. Kevin asks for our bill  and indicates that we're paying for his dad's meal.  Okay, cool.

The server split the check evenly.  So we paid for mozzarella sticks we didn't eat, a margarita we didn't drink, and more for our food than was necessary.  Kevin realized this on the way home and genuinely wondered "Who do we talk to about that?"  I'm all "Umm, your BROTHER, who commented "Oh, they just split the bill in half" and didn't offer to pony up extra."  And that's where the conversation ended.

So, yeah, we paid EXTRA for a miserable meal.  At least we brought home leftovers and I don't have to cook tomorrow.

And that's why we don't do Friday Night Dinners anymore. #thankscovid

This sounds hellish but you make it so HILARIOUSLY hellish, it's hard to wish for these situations to stop. "THIS IS GOING SO WELL. WHY DID WE STOP THIS FUN THING." "I am considering going back to the car and I haven't reached the table." "Please take all knives and forks from the table, thank you." "It's so rude to the servers and to the folks at the table who don't want to be there."