It Ain't Easy Being Green - What Did Surely Take Apart Now

Because I just can't let things be, I started painting the bedroom.  Yes, finally.  And yes, "started".  And no, the photo albums aren't finished.  I am comfortable with the fact that they will remain unfinished and my heirs will have to decide their fate.

My goal was to paint  last week, during spring break, but I chose to do nothing instead.  Which is great, until I try to manage a big project and that pesky work thing at the same time.  Newsflash: work lost out.

If you remember...or if you don't click THIS...I did a painting experiment on one wall in the bedroom.  I lightened the mocha color I used in the living room and it was a FAIL.  A big fail.  It was supposed to be a sandy color but it turned out BLEH instead.  It defies photography and looks okay in photos:

At least a month ago, I chose a color and left the paint card on the fireplace so I could see it in varying light.  (at least that's what I tell myself)  Finally, Kevin casually mentions "I like that color, actually."  Kevin, who never expresses a preference, LIKES a color.

The plan was to paint the mistake wall.  Yep, that was the plan.  Is that what happened? Of course not.  Nope, I painted the three other walls instead.  Two of which were painted last year. I had left the big, tall and wide wall for last when I painted them.  I knew I'd need help so I just kept putting it off.

So I started with that wall.  Don't try to make sense, there isn't any.  I set my intention to just reach as far as I can without breaking out the big ladder.  Kevin will finish that part this weekend.  Especially since it's unfinished and he enjoys that as much as I do.

I chose this paint color:

I was a little afraid that it would be too dark for a bedroom then I realized what I said. It's a bedroom, usually a person wants those dark. Sigh.  It's the shade of color that changes tone and depth with the changing light.

Like always, this is a Not Tell Kevin Project.  Of course, like always, he calls while I'm on a ladder.  "What are you doing?"  "Nothing, working."  "Why do you sound...winded...Is that the television?"

This is where I say that it take two and a half viewings of Bohemian Rhapsody to paint three walls of a master bedroom.

I explained what I was doing and he was all Of Course You Are.  "Don't fall and break your hip." he always says.

I finished the big wall and was nearly finished with the window wall when my phone rang.  I usually don't answer numbers I don't know.  But I did and good thing: the auto body shop phoned to let us know the truck is finished.  I texted Kevin and then he phoned. "I'm coming home early."  GREAT.

Now, I still have to finish painting, shower, unload my truck, clean it up from walkies with Lucy, oh, and give Lucy a bath.  And he's coming home early.  GREAT.  "What time are you thinking?" I ask, squinting at all the projects around me.  "3:00, I'll be home at 3:30."  Okay, I sighed, that's actually doable.

I cleaned up everything, including me, and we went to get the truck.  So, that has finally had a happy ending.  And I didn't have to make dinner.  Double Win.

But I had to try to sleep with an unfinished project within my sight.  I swear if I could have painted without waking Kevin and the dog, I probably would have.  But alas, no.

Yesterday, I finished the unfinished wall and completed the wall with the doors.  It looks pretty good, if I do say so myself.

Now the debate begins with the Wall Fail.  Part of the reason that I painted the other walls was in vain hope that it would maybe look okay with the green.  My hope was dim but maybe it would work out.  To my surprise, Kevin wondered the same thing.  So we agreed to just sit with it.

It took about an hour and we were both "Nope."

Now today, my plan was to start and perhaps finish the big wall.  It's noon and I just got out the paint.  Chances for success is not looking good.  Also, I have to go into town again for work.  Sigh.

Oh, and remember the whole giant television story?  Yeah, there's a 45" television in my way now. I had mentioned it last night to Kevin but then forgot to remind him to move it this morning.  It's okay, it's not the end of the world.

And this is why I was grounded from painting in the old house;

I am to the This Needs to be DONE portion of my Project Coping Scale.  Even though the television and dressers were still in the way, I could still paint.  I took an old fitted bedsheet and draped it over everything.  It worked perfectly, except for the not painted parts.  Which you cannot see unless you're looking for them, KEVIN.
This weekend we will finish it.  It will take maybe an hour and this godforsaken project will be completed.  At least it looks nice. Or will.  Will Look Nice. 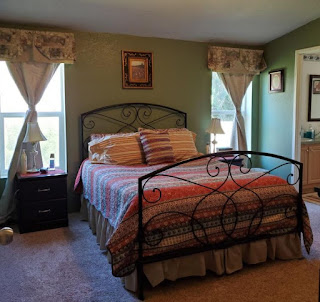 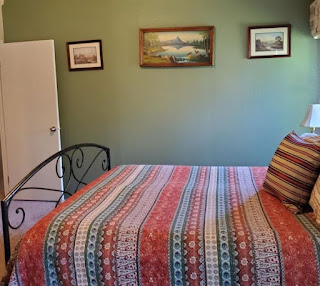 This is a very soothing color; perfect for a bedroom.

Love the color! At first glance, I thought it might be too dark, but it is actually much lighter than I thought. Looks great!