It's Supposed to be Sandy

I had to go to the chiropractor this week. It turns out that I have to take a break from painting. I painted the big wall in our bedroom and then couldn't move my left arm by the time we went to bed.  That seems bad.
And to add insult to injury, the wall turned out not great.  Of course, there is a story.
I wanted to paint an accent wall even though the magazines, etc. said it's not a thing anymore.  I didn't want to paint that wall the same mocha color because I figured it would be too much mocha and a little too dark for that room. A few weeks ago  I chose two paint cards, left them out in the room so I would see them in different light, and had kind of decided on a sandy color.  But I was working my way up to actually buying paint.
My niece stopped by two weekends ago to pick something up and Kevin suggested that I ask her.  She has bohemian taste (bright colors, shabby chic, clutter) which is the way opposite of me. So, I found it interesting that Kevin suggested to ask her.  But whatever, I did.  She looked at the paint cards, at the walls, and pointed to something a little darker than I would have chosen AND to paint a different wall the darker color. Hmmm.
So that conversation was helpful yet, gave me more to think about.
Then I had a dream that the niece came into the house unannounced, which would never happen.  She said to combine the mocha color and the cream color and use that.  In the dream I was all "WHY didn't I THINK of that!?!?!"  Then I woke up and was still thinking "Why didn't I think of that!?!?"  Sometimes I love dreams.
I asked Kevin what he thought and he was "Meh, try it and see" (again, he's available for motivational speaking) So I thought about it a few more days then just went with it.  Yes, I realize that painting is not supposed to be an impulsive act. 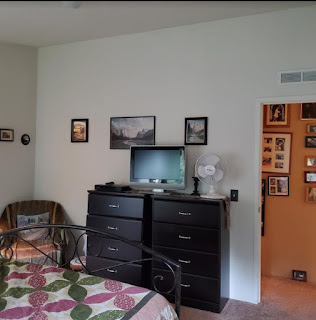 Before. Sad flat white paint
Okay, there's a reason that they shake paint to mix it.  Even though I stirred, stirred, stirred, it was still blotchy in spots.  And it really, really, really shows if it doesn't cover on that wall.  I wasn't super into painting that day but I wanted it done more than I wanted to do a good job. I probably should have chosen my battles better but here we are. (possible title to my autobiography)
Because I wasn't in the mood to be painting, per se, the edges are sloppy.  Also, I knew I was going to paint the adjoining walls soon so I just kind of went with it.  And THIS is why I was banned from painting in the old house.  I will finish it, I just need a break. And my shoulder to fully function, I'm so picky about these things.
As it turns out, the damn color defies the camera.  It's almost a skin tone. The camera makes it look yellowy. I have turned lights on and off, I have used Instagram and Snapchat and the camera, I have placed my hand on the wall and an iced mocha for a color comparison. The camera insists that it's yellow and not skin tone. 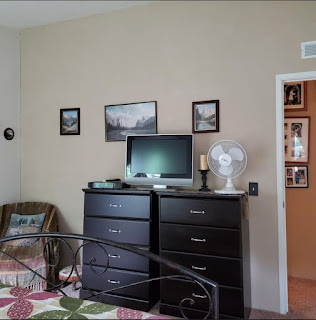 Days later and I am still meh about it.  I am still going to paint the other three walls (and doors now too. Thanks, SPA, for the reminder) the cream color and I hope that will mellow it out a little.  However, I have not crossed repainting the wall off the list yet.
When I paint, it is an ask forgiveness, not permission situation with Kevin.  Me painting pings his anxiety so it's easier for all involved.  (until he calls and I'm on the ladder but whatever)   The night I painted, Kevin walked through the room, went into the bathroom, showered, and didn't notice until he came back out.  I heard "Oh"..."..."You...painted..."  Which made me laugh because that's how I felt about the situation.
Now I have to buy two gallons of the cream color and paint the rest of the room, which should go quicker because one wall has two windows.  I told Kevin that I needed help with the other big wall and I was met with blinking so I wonder how long that is going to take.
Posted by Surely at 11:15 AM

You didn't ask but...my advice for when you do get ready to re-paint the accent wall - buy sample pots of the various colors you are considering. Then paint swatches on the wall to determine which one you like. This method will save you from re-painting *again* if the next color you pick is also one you don't care for.

Also, again you didn't ask but...if it were me, I'd go with a drastically different color from the cream you plan to paint the other walls.