It's been well established that Lucy is the goodest puppy ever.  Out of the four dogs we've had, she's been the easiest and best trained.  She's smarter than me, by far.

She's nine years old now, even though we still call her a puppy.  We are in denial that she will ever be Not a Puppy.

She started acting up about a month ago.  She wouldn't sleep in her crate.  Tore it up once at 2:00 in the morning.  Whined and cried.  Refused to go in at bedtime.

When I gave up and let her sleep with us but it wasn't like she was all "I WON, I am in the People Bed!" Sometimes she was alerting - going to the windows or patrolling the house, and sometimes she would just be in like a panic and want to lay ON us.  Occasionally, she would switch it up and sleep through the night in her crate.  Just to keep us off balance, I think.

After two weeks of sleep deprivation torture, I took her to the vet. Even though she had a checkup in November with shots, we went to make sure something wasn't happening.  $222 later and it is determined that she is aging and having anxiety.  STAND IN LINE, PUP.

The vet first suggested puppy prozac.  I told her that I would like to explore other options before throwing chemicals at her.  I emphasized that just like me, if she needs it, she will have it but let's try other things first.  She said she can't recommend it because: rules but that some people use CBD.  We will try that if this continues. (and for the human, also)

The vet then suggested to increase her walkies.  I explained that we do long walkies every Friday, and other short walkies during the week and that she has 6 acres to roam all the other days.  Nope, dedicated, regular walkies.  Like I mentioned on the social media, I think she paid off the vet.

Okay, well, regular walkies isn't going to kill me so I set my intention to figure out a way to make this happen.  The first week we did walkies every day, a mix of 1-2 miles each time.  She slept in her crate at night that whole week.

Then, like a switch, it was as if she thought "Hey, they've tricked me. I will NOT sleep in my crate."  So now she sleeps on the couch.

Last week we went every day but one.  She was tired, I was tired, and the weather was a little bleh so we skipped it. It was enough that Kevin was actually starting to feel bad for me.  She continued to sleep on the couch, or her pillow behind Kevin's chair, or her fort under the dining table or even sometimes her bed.  As long as she isn't waking us up, I can't care.

Sidebar: cousins are coming to the house. Cousins who we haven't seen in two years.  Kevin mentioned something - in JEST - about having the house clean.  I sassed and said: "When is it never not perfect?  Name one thing that is wrong."  He thought about it and then grinned...oh no.  "The fact that there are one, two, three, four DOG BEDS in this house."  Okay, fair enough.

Then the other night I was startled awake.  She was scratching at the door, threw herself against it, and whined.  I jumped up and opened the door then she shoved past me like her tail was on fire.  She jumped onto the bed and laid down.  She laid with Kevin for a bit then moved and had to lay ON ME.  I'm starting to think that I need to go to the doctor, she 's freaking me out.

Once she settles she's fine.  During the day, totally fine.  She's not in pain, doesn't complain, has no symptoms.  She will even go sleep in her crate when I'm working in the office (where her crate lives)  If she thinks we're leaving, she puts herself in her crate. She just won't sleep in it during the night.

I've pulled it apart Twice.  We put in a sweatshirt that Kevin had worn to work.  We closed the curtain, we turned up the radio.  We put more blankets in, we put less blankets.  We have done all the things and  No Thank You.  She's gotten two baths and the vet has checked her for fleas and ticks.  Kevin wondered if we needed to put more cushion in there.  To which I gestured to the crate with a "Seriously?"

So, worse case is that I get exercise.  Worse case is she sleeps elsewhere.  I mean, in the scheme of things it's not a big thing.

But, there's always a but.  When I can't sleep, I will do laundry.  I will put dishes away.  I will write.  I will go outside and take photos of the sky.  I can't do these things while she's sleeping in the living room.  She will be all "Oh, we're up?  Awesome! What are we doing?"  So now it feels like I'm grounded in my own damn room.

Because she's a shelter puppy, we don't know her exact age.  According to the shelter and the vet, we approximate about nine years old, maybe leaning toward ten.  Her muzzle is grey, her eyebrows are grey.  So with that, we think she is aging and getting a little clingy.  I also discovered now that I'm paying attention, that her hearing isn't what it used to be.  I've startled her twice and that would never happen before. She is a Navy Seal when it comes to that stuff usually.  (yes, they checked her ears)

I worry a little bit if I have to return to an actual office in the Fall but we'll jump across that bridge when we get there. Meanwhile, she can have all the dog beds in all of the rooms.  And outside. Until then, look at this face: 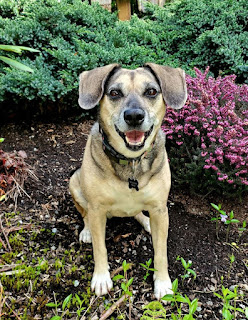