On The Side - What Did Surely Take Apart Now

This month's episode of What Did Surely Take Apart Now is Kevin's side table.  It sits next to his chair and holds all the stuff that he hoards: pens, pocket knives, catalogs, timeslips, candy.
The table was built by his dad almost thirty years ago, probably.  It sat between the parents recliners in the Moody House.  We inherited it when they moved here with us.  It's kind of a cool table as the drawer is huge and there is a pull-out above it, kind of like a cutting board.  It was intended as an extension of sorts.  Kevin never uses that feature because of the way the table sits.
There is heavy glass on the top.  Glass on furniture is one of my least favorite things but he put it there for durability.  No need to worry about water rings, etc.  Except it's a dust catcher along the edges.  Also, before we got it, there was a spill that wasn't cleaned and it had stained the wood. UNDER the glass, along the edges.  Also on the front of the drawer, if you look closely.  Sigh.
This is where I say when I went into the little hardware store, the guy recognized me and asked what I was working on now.  I would like some sort of ribbon, please, for that accomplishment. This guy has seen me through many painting projects, a gardening project, and the dining table.  THIS is why you shop in the little, local stores.
I started this on Tuesday...probably... and it went pretty smoothly to begin with.  Because, I would discover that my father-in-law - who is infamous for Good Enough - had never stained the wood.  I think maybe he put polish? oil? on it.  This made sanding super easy. I think it might have taken longer to take apart everything and move it outside. 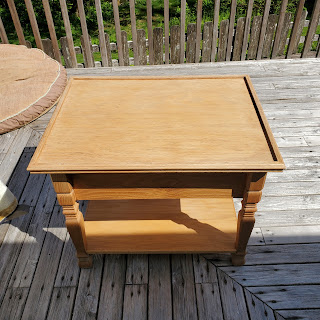 Sanded
Then I cleaned it with that godforsaken tack cloth that I hate.  I cleaned up my mess and got out the stain.  Did I think to put anything under the table to protect the deck? Nope.  Has Kevin noticed yet? Nope.  The stain went on super easy and I kept waiting for a repeat of the dining room table.
It went great.  I think partially because I knew what to expect, I knew better what I was doing, and it was just different kind of table/wood.  Still, I kept waiting for the other shoe to drop.  But it didn't and after two coats, I was able to bring the table back inside and put the room right before Kevin got home that night.
All I said was "Just don't spill on it yet."  To which Kevin said "No promises.  That's too much pressure."  For the record: I'm the spiller in this family.
I still had to put the sealant on it, which is trickier. It takes two-three coats, with four hours in-between and 24-hours before "regular use."  I set the goal to start on Friday morning, after he left and it would be done by Friday night when he got home.
Yeah, not so much.  It was 44 degrees when he left in the morning.  Too cold to work outside.  The sealant has an odor that lingers so doing it inside wasn't an option this time.  (lesson learned from the dining table: it took almost a week for it to stop smelling)
I started working my actual job, intending to just work an hour or so. This was a deadline week and while I had met my portion of the deadline, others had not; giving me stuff to do. Two hours later and now I'm sleepy. I had forgotten coffee and breakfast. It's still not quite warm enough so Lucy and I took a wee nap.  Two hours later and now we're late for the day.
We went on walkies, a new trail that ended up being about 2.25 miles long, stopped at work to pick up stuff, picked up groceries then headed home.  Just to sit back down to work for a bit then remember that I forgot to pick up something while I was in town that couldn't wait.  Back into town I went, spent some unexpected time with a friend, then home again.  Now I'm really late.
Kevin had plans for the evening with his bff so I knew I still had time.  Also, it was unseasonably warm yesterday.  Then he got out of work late, left late, making me later. 6:30 pm I started applying the sealant stuff.  It went fast though and there was still a bit of sun on the deck for it to dry when I started.
Fast forward to 9:00 pm, and it's still tacky to the touch...we're on hour three of four hour drying time. Sigh. I hauled it into the laundry room to discover...
One of my long blonde hairs was lengthwise in the sealant. FML.  And, it turns out that the deck isn't level and the sealant had pooled a little bit on one edge.  I KNEW this was going too smoothly.  Ha! woodworking pun! Look at me!
I took a deep breath and laid on the couch.  Tomorrow is another day, Scarlett.
Kevin worked this morning so I slept in until 8:30; which is when Lucy insists it is time to get up.  I cleaned up and we went to get coffee and treats.  Then Kevin phones that he's already on his way home.  I'm trying to get this finished, Kev. Stop messing with my schedule.
I hauled the table back outside and gathered everything up again.  Sanded, sanded, sanded. Again with the godforsaken tack cloth.  Finally, I started to apply another coat of sealant.  Turned around for a second to find...a bug flat on it's back in the wet sealant.  The universe is HILARIOUS.  I went to flick it away when I realized it was a wasp-like creature and thought better of that.  I turned to get a rag, turned back and it was gone.  Okay, all's well that ends well. I guess.
Oh, and also during this Kevin's dad goes by the house on his tractor.  I kept waiting for him to stop and ask what I was doing but he didn't.  Thank you, sweet tiny 8 lb. 6 oz. baby jesus.  For one thing, I didn't want to hurt his feelings that I was fixing changing his hard work and for the other, I don't want supervised/opinions.
This coat went smoothly once I got started.  Now I'm waiting for it to fully dry and I will forget this project ever happened.  Probably.
Also, I mentioned to Kevin that now "we" didn't need the heavy glass on top.  No, he likes it.  He wants to keep it.  Heavy sigh.  Alrighty then.  With that knowledge, I could have left the hair, the pool of sealant, and the bug on the table and just sealed it up under the glass.  Damned missed opportunity, right there.
Meanwhile, I'm still considering refinishing that end table we were given...I need to come back and read this story and Sur La Table on the daily until that consideration stops.
And...we're ignoring there is a hair from Lucy on the top.  100% ignoring it.  It will be a tribute.

I got up this morning to it about halfway put back together. Yea! except for the fingerprints all over the glass from when he put it back together. I extra hate that glass.