So, we hired landscapers.  What had happened was our non-family neighbors gave a really good recommendation to my father-in-law and he hired them.  But wait I said WE hired landscapers.  Yes, we did.   Firstly, my f-i-l hired them to care for my b-i-l's yard and we don't want to talk about that because it requires cursing and frustration.

Weeks later, after they finished cleaning the sh*tshow that is next door, they came over to our house.  It's a husband and wife team and they're both really nice; she's the alpha and he's the "yes ma'am".  She does the designing and detail and he does the big work.

I walked them around the property, focusing on the backyard and the lower property. (we live on 1.5 acres, and it slopes three levels from the driveway down to the creek)    I told her don't worry about the rock garden and she was legit disappointed. "We'll see" she says.   I will admit to taking certain glee when she said "This is so much nicer than next door. This is so well taken care of, why do you even need us?"  *PREEN*

Kevin hated that he was home because he feels (like I do) all Lord of The Manor working in his shop while they worked.  But now they've been here a few times and he's excited.  He realized, I think, that they're doing better work than either of us will ever do. Also, he saw how happy it made me.

We also learned the difference between having actual landscapers versus someone who just weed-whacked.  They're both detail oriented and have presented ideas that I love.  I think I can learn A LOT from her and  I never thought I'd be this excited about landscapers. This feels like a Milestone and it is something I will gladly pay for forever.

And if you're thinking this is an unneeded expense and privilege, this is where I tell you how much they charge.  They were a little hesitant when we asked and they said "$15 an hour for him doing the large labor and $25 hourly for BOTH of us working."  They were uncomfortable, like we were going to say that was way too much.  Instead, we tip heavily because OMG, so inexpensive. As Kevin has said, "I wouldn't do it for that amount."

They made my little misfit garden lovely, like I had envisioned. They are going to work on the cascade - planting ferns and groundcover around it. 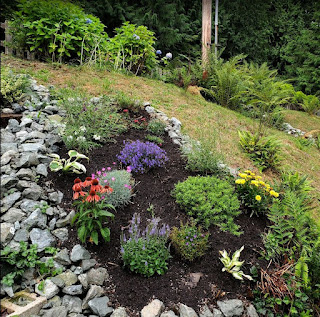 Just the weed whacking that takes half a day and is not at all easy because it's on hills.  The care of the area we ceded to the County for the creek is taken care of instead of haphazardly being mowed by my father-in-law, making me anticipate one day seeing it all mowed down on accident.

Kevin and I are continuing our annual tradition of disagreeing about what needs trimming and what doesn't. I finally told him to stop trying to control nature; which didn't know what to do with and walked away.  Made me laugh.  So she has started - and shown me - what/how to trim things back that have suddenly taken off growing now that summer finally arrived.  They will return to make sure the garden is ready for winter, which is something I've never been able to do.  I'll probably even remember to plant bulbs this year.

The knowledge that I've gained is almost as big of a pay-off as the work being done by someone else.  She explained that most of this garden is on a steep hill and there needs to be rocks or something to help hold everything where it is placed.  Now I've been collecting small pieces of driftwood and medium sized rocks from walkies on the river to plant along the way.

Now in the time it's taken since I started this, it's been about a month...probably longer now.  The garden is so happy.  The lavender is blooming so the bees are super happy.  I've seen hummingbirds flit around the flowers. Suddenly, there are a lot of white butterflies.  Everything is so pretty right now.  Then this friend arrived: 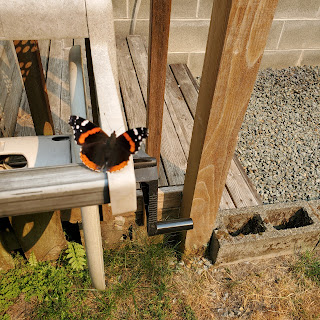 I keep buying flowers, even though I'm running out of room.  The goal I had set for myself was to have something pretty Spring through Fall.  Then something green all year around, thus all the shrubbery and ferns that last through the winter. She instructed to not buy any more shrubbery and had a bit of an eyebrow raise with the last purchase.

I have the tendency to notice an open space and want to fill it; not thinking that these things will grow out and fill said space.  But then I will notice that I didn't have any red flowers, then I bought an orange flower because it's weirdness caught my eye.  Purple is predominant, especially since I keep buying lavender. So I bought yellow flowers.  AND, this year one of the hostas bloomed and I didn't even know it did that.  Purple and while blooms that look prehistoric. 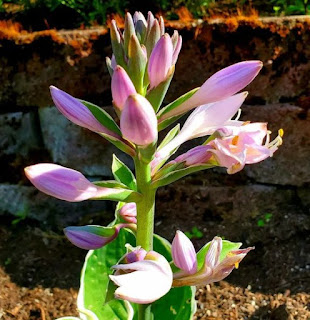 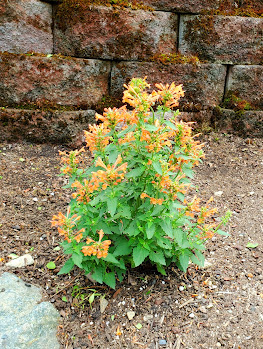 Then, while doing dishes, I noticed that there is mama robin in our butterfly bush.  Last year when I was attempting to trim bushes, I knocked down a bird's nest.  It broke my heart because I don't like killing living things, be it animals, bugs, or plants.  I put it back as best as I could but assumed that it would be abandoned.  It appears that she has returned and rebuilt.  She'll pop out of the bushes, hop around throwing bark and mulch around, looking for food.  Lucy doesn't bother the robins, it's like they signed a peace accord.

The other day, while watering, I thought of my paternal grandfather who died when I was fifteen.  He had a huge garden, both vegetable and flower.  I wasn't close to him but I do remember playing in and being in awe of his garden.  Then I remembered there are photographs of my maternal grandmother with her flower gardens.  I had a little full-circle moment; even though assuredly they didn't have landscapers.  Also, I see where rock gardens are apparently genetic: 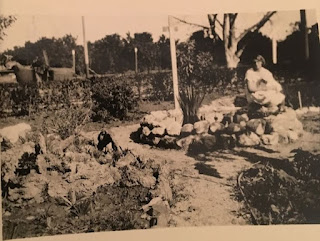 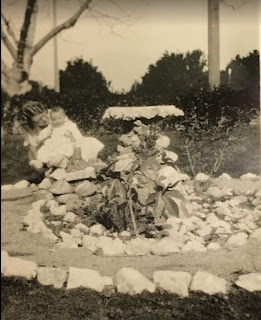 How amazing - I'm over hear flying by the seat of my pants. Yes, I suspect you will learn a lot.