Still This Happened - Part One and Two

From early this week:

I woke up a little asthma-y this morning.  It's probably just from the change in the weather and wildfire smoke.  It is probably because I'm still winding down from last week.  But, what if? What if I'm actually sick?  Now, that train of thought isn't usually like me.  Not at all.  AT ALL.

This is what Covid does to you, though.  It makes you hypervigilant.

I have two more days of quarantine from the general public.  I've put away the bed in my office and moved back into the main bathroom.  I've done more laundry in the last two weeks than ever.  Every surface has been sanitized multiple times.  The last time the house was this clean was when we first moved into it.  I had to force myself to put the wipes, etc. away.

Because we had Covid in this house. And I keep being vigilant, even though we were for almost two years and Still This Happened.

I've "snuck" out to take Lucy for walkies at the little park and it feels strange.  Usually there is no one there, or at worse - people at a distance.  Yesterday, I encountered a little family with two kids. Two kids who found hidden rocks and wanted to tell me all about them.  I kept a distance but felt sketchy doing it.  Then at the end of the walk, we encountered another little family.  The little was hesitant with a stranger (good girl) but their giant derpy dog wasn't so it drew them closer.  I felt a little guilty being out and about and a little icky because I feel like I'm Typhoid Mary right now. Even if I'm asymptomatic and vaccinated and quarantined.

And re-acclimating to peopling is going to be a thing AGAIN.  Super.

I've been taking my temperature when normally it wouldn't occur to me.  Right now I'm playing the fun game of Is it a Covid? Hot flash? Humidity? Hypochondria?

I'm scheduled for a rapid Covid test tomorrow and we're assuming that I can go back to normal afterward.  Today, though, I need to go to recycling.  Today the landscapers are coming to the house. Today is the day I go into my actual office. But nope.  Recycling will have to wait, I'll distance from the landscapers, and I'm skipping this week at my office.

Kevin is about 75%.  He's back to work - more on that in a minute - and is trying to do light-duty, manager-y kinds of things but that isn't the nature of his work.  He isn't back to full speed here at home either.  It's taking all he's got just to work.  His sense of smell is still gone.  Every once in a while he thinks maybe he can smell something but I suspect it's more sense-memory than actual smell.  He's a little forgetful and has a definite memory gap from when he was sick.

He has a cough, as expected.  Surprisingly, it takes me back to when he was really sick.  I regularly remind both of us that it will go away, eventually.  Nothing like a little illness PTSD sprinkled into this mess.

He's still sick enough that he asked the landscapers to mow the yard.  Anyone who knows Kevin in real life just gasped. That is not Kevin.

Gigi asked about the coworker.  Well, there's zero remorse there. It came up and the guy just shrugged it off.  I wondered if some of it is pride about being wrong about Covid but even after being very sick himself AND making people sick around him, he still thinks it's NOTHING.    Kevin did admit that it's colored his opinion about him and it may affect their relationship.  It's reasonable; because of the coworker's willful ignorance and recklessness, Kevin was really sick.  He's a better man than me (obvs.) because I still want to throat punch him.

I posted a Lucy photo, twice, on the social media with a reference to being quarantined.  Just low-key and trying to find some humor in this humorless situation.  Most of our friends and coworkers already knew anyway; I wondered if that would prompt any sort of anything from my family.  That would be negative, ghost rider.  So any guilt I feel about not reaching out is, like, gone.

But because they're antivaxxers, they have convinced themselves that it's not a big deal.  There's probably a little "See? It didn't matter that you're vaccinated, you still got it and you're FINE."  To which I would reply "He was not EFFING FINE.  We were not FINE." (and we're back to the throat punching visualization)  And, can we just acknowledge not only the health aspect of this misadventure but the psychological one, as well?

I tested negative for the 'Rona on Thursday.  I admit that I was more nervous than I thought I would be.  Usually I am a Assume It's Fine human but in this world, right now, one can't just assume.

As instructed, I emailed the results to my doctor and she responded

"Congratulations! What a relief!  Ugh this is all so terrible!"

Then I posted on the social media, this meme with the caption "Nice try, assassins. #getyourshot #noseriously"  Again, trying to low key make a little light of a heavy few weeks. 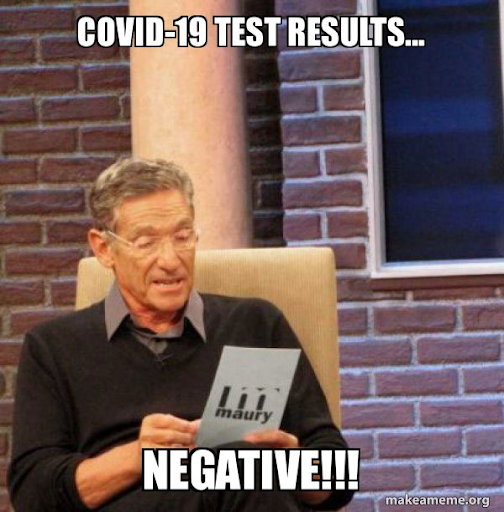 There was only one comment, wanting to debate the vaccine but in a respectful way - other than we disagreed.  Only one person liked that comment, which surprised me a little.

I replied with my opinion

This person is not good at reading social cues (for real) and continued.  Again respectfully, wrong still but he tried. 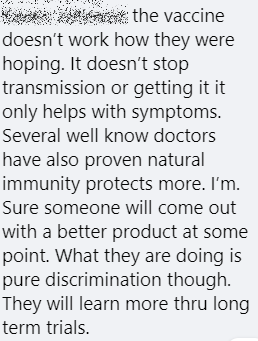 I have a two comments rule when it comes to debating a sensitive topic, so I replied with the below subtle warning:

He stopped, as intended and it's all good.  I don't mind respectful disagreement; I do mind mis-information.
So now, two days later he's chatting with Kevin.  The cough started and he commented with concern.  Kevin explained how easy it is to get and keep a cough; walking through the whole sick, diagnosis, treatment, recovery process.  The friend was surprised and amazed.  Now, perhaps, he has a little more understanding about where we are coming from.  And how important vaccines are for the world around you and not just you.
To quote the internet: I'm pretty tired of being part of a historical event.  I'm thankful that he was just a number in the diagnosis column and not the fatality column.  We're both planning on getting the booster shot.
Because we had Covid in this house. And we keep being vigilant.
Posted by Surely at 12:12 PM