What Did Surely Take Apart Now - The Bathroom Edition

This all started with a social media post about dollar store organization ideas.  It ended with I have a packing list for a work trip I'm taking in one month + a week and this bloggity post.

But let's begin at the beginning.  Kevin needed a thermometer when he was first getting sick.  At 5:15 in the morning.  We have two, I know where they are, but at 5:15 in the morning I'm not at my best.   I found it, after a "That should be easier to find" comment that earned him a sleepy glare.

This is where I say that I have a little container/organizer that holds Cold Stuff.  Cough syrup, saline wash, cough drops, and yes, the thermometer.  It was 5:15 AM, KEVIN.  Oh, and quick tip: don't hover when it's that early.  It's just not a good idea.

To be fair, to someone who lives in this house but doesn't worry about these things, the container is at the back of one of the bathroom cupboards.  So, yes, to the untrained eye - it looks disorganized.  But it's not.  The fact that I have a dedicated and organized container for Cold Stuff should be all the evidence I need, but here we are.

What IS disorganized is the basket in front of said Cold Stuff.  It's a simple large plastic basket that has stuff thrown into it haphazardly.  Stuff ranging from extra toothpaste and deodorant to attachments to Kevin's shaver to first aid kits.

I don't enjoy the storage in our bathroom because there just isn't enough shelves.  And, fun fact about me: I hate stuff on the counter.  Hate it.  Especially if it has labels from the store.  I know, I know, I'm abnormal at best.

Fast forward two...no, three weeks now...and I was scrolling social media.  One post was about using dollar store containers for more organized pantries and refrigerators.  Yes, I was talking about the bathroom. Keep up.   I made a little list of things I might like to try then spent some time off and on thinking about if any of those would work in actual reality.

Because Lucy now expects to go in the truck with me whenever I leave, I have to plan my trips into town.  Yes, she's a dog and not the boss of me, but really she is.  She is good for three stops and after that, she is a thirty-pound hairy toddler.   However, Kevin is home today and even though I didn't feel like taking the hour it would take to go into town, I did. Kevin bribed her with a treat as she sullenly watched me back out of the driveway.

There is only one dollar store nearby that I like.  It's tucked in the back of a quiet shopping center and it's never busy.  Also, one thinks of a certain demographic when imagining a dollar store and that is not always the case at this particular store.  Not judging but it's nice that it's quiet there and organized.  Most of those stores are neither of those things.

Right now all the school stuff was out so I was in luck with finding baskets, organizers, and containers.  I knew that I probably overbought but I also knew that I would most likely want to go get more of something else once I started this.  I was right and wrong.

And, of course, I was IN IT and forgot to take before photos.

I believe you have to make a mess to clean a mess so I started with pulling out everything and putting it on the counter.  I will never not be surprised at how I will put something in there thinking "I'll deal with that later" and then never do.  Half empty lotion bottles is the prime example.

First I went for expiration dates.  Then I consolidated what I could from multiple containers to one. (lotion, shampoo, dixie cups)  Then I organized by need.  Extra and refills are first, first aid and Cold Stuff are last.  We went from one big jumbled basket with stuff piled over/on/around it to this:

One would think I would continue to the medicine cabinet and my stuff but nope.  I had a big basket to use now.  I pulled apart the bathroom cleaner and supply cupboard instead.  This is where we discovered the cheap toilet paper I bought at the beginning of the pandemic and kept "just in case", a bathmat that Kevin hated but I kept, and way, way too many rags.

So this was converted from a possible hazmat site to a nice little cupboard again. 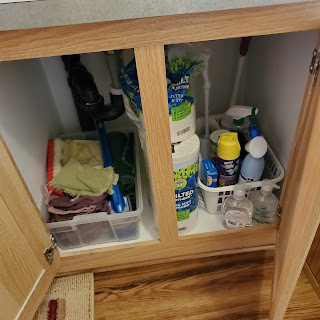 Now, Surely I would do the medicine cabinet and my stuff next.  Nope, don't be silly.  Next was our travel go-bags for toiletries.  Before the pandemic, we were gone a lot over the weekends so I have a consistently stocked go-bag of toiletries.  Also, I have lots of extra stuff like empty bottles, half-used toothpaste, hotel lotions, and just random stuff because reasons.  Some of which is in the drawer of the common folk bathroom, in the cupboard I just organized, and my medicine cabinet.

I laid out a towel on our bed and just dumped everything out onto it.  Then I restocked our go-bags and had to determine what is good to keep, to replenish, and what is unidentifiably old.  Remarkably this didn't take long.  But it did prompt my alphabet brain to begin thinking about the trip I'm taking in 36 days.  Next thing I know I'm at my desk printing a packing list and adding items onto it like "inhaler" and "reading glasses"  Also, I have to find a bag/purse because I don't carry one in normal life.

Okay, so.  That was done, for now.  It will give my brain something to play with in the middle of the night.

Not that I wear much makeup, but I did have more makeup from pre-pandemic, being presentable to other humans, days.  I assume it's expired and not something I will resume using so into the trash it went.

I have two perfume bottles, about half full, that were given to me but I don't wear.  I keep shuffling around those and I really should do something with them.  And there were more travel sized lotions, I don't know why.

After a little bit of reorganization, I have an empty drawer. For more travel size lotion, probably.

Now I can relax...hahahahahanope...because I know I have mostly everything for my trip. (I just ordered a travel mirror and made a note not to forget my inhaler)
Also, the bathroom is more organized than ever before.  Even Kevin can find something now.
Here is the main bathroom, with no products on the counters and perfectly organized cupboards below: 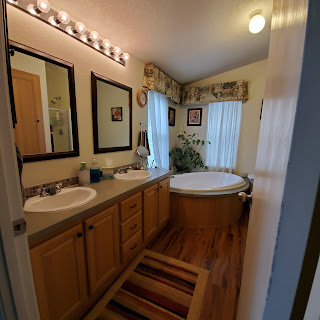 Oh, I didn't do the pantry after all.  It's pretty organized already and I just can't bring myself to empty cereal or chips into separate containers.  I admit that the idea looks good, it pleases the alphabet brain, but the a.d.d. is all Get Away From Me With That Nonsense. 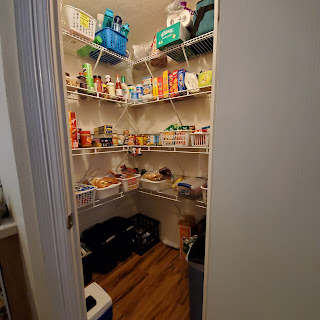 I did organize the drawers in the refrigerator, even though it's hardly worth mentioning. Other than I mentioned it at the beginning of this most fascinating tour through my OCD mind.

I had intentions of posting a link but Pinterest is a wormhole that I don't have time for and the original idea must have been on tiktock - also a wormhole.  Just search "Dollar Store Organization Ideas"  :)

Also, keep in mind that there are only two of us in this little house, both with alphabet brains.  These are not judgy suggestions.  They are a Hey, I saw this and tried it and it worked ideas.

Oh, I'm so glad you liked the lotion!!

Bathroom cupboards collect SO MUCH STUFF. I need to go through ours. When we moved to this house, which has a tub with water jets, I thought we would take SO MANY DELUXE BATHS and I bought many clearance bath bombs. Of which we have used...one? two? I need to jettison most of the rest. We also have a ton of partially-used things from Elizabeth experimenting with making her hair wavier.

I love to have things organized...does it ever stay that way? No...particularly when you live with another human (eyeballs The Husband).

I also prefer to have the counters (all of them) as clear as possible (again, eyeballing The Husband).

Out of pure curiosity - what is the lotion you referred to?