Random Stuff in My House

In an effort to post more regularly, I came up with this idea. Granted, it was about three o'clock in the morning so bear with me.

Random stuff in my house. I am going to choose an object from my house, photograph it and post it. As I thought about this, I realized that I really do have some random sh*t in my house. As I am sure so do you. 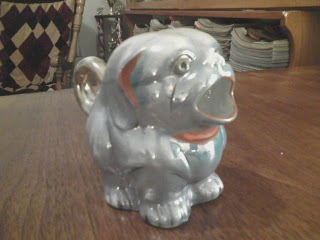 This is, by far, the creepiest thing in our house. It resides in our china cupboard. I actually have it placed in such a way that I don't see it when I walk by. It freaks me out a little. (aren't you glad I shared?)

It's a creamer. It's probably an antique and a collector item. I say it's a monkey but the family says it's a dog. I say it's creepy.

When my in-laws sold the family home and moved up here, we divided everything up amongst the family. The boys (Mad Genius & his brother) divided three china cupboards full of china. If they disagreed about anything, it was maturely settled by Paper, Rock, Scissors.

Unfortunately, I cannot blame the ownership of this creamer to a losing round of Paper, Rock Scissors. Nope, the Mad Genius chose it On PURPOSE.
Posted by Firegirl at 9:13 PM