It's about halfway through December 26th and I'm defrocking the house already. (TBH: now it's the 27th)

I'm on winter break for the next two weeks so I've plenty of time to do this.  Why I feel compelled to do this So Much today is a mystery.  I mean, it's not like we had an unhappy Christmas and I just want to be done now.  It was actually a pretty mellow Christmas, for once.

My plan for today was: nothing. Kevin had to work so the only thing planned was to watch Doctor Who all day.  BBC has a marathon going right now so it's been playing here since Christmas Eve evening, if Kevin isn't around.  (He just can't even.  He glances at the television and says "Because of course the Titanic is flying through space" and shakes his head)

Right now everything is piled in my office, which I just cleaned and organized on Christmas Eve morning so the organization lasted almost two whole days. The tree is going to be an hours long task and I'm just not interested.  It's still pretty, smells good and makes me happy

I think part of this urge is that this house LOOKS decorated at Christmas.  I just haven't found a balance of decorating for the holidays with this house.  It tends toward looking/feeling cluttered, in my brain.  I'm certain that it's not, in reals.

Many of the decorations have been changed or replaced since we moved in, in an attempt to appease this house. I've mentioned it before that this house shrugs off decorations like it's wearing an itchy wool sweater.  While the old house had plenty of surface to decorate and because it was an old house, it just preened in Christmas decorations.

I guess the best way to describe the settled upon decoration style for this house is like the real simple magazine. Lots of decorative candles, bulb ornaments, white lights, and beaded garland. A few years ago, Michael's had decorations that looked like they were from the Grinch Who Stole Christmas and I loved them. They are glitter heavy and bright green and red. 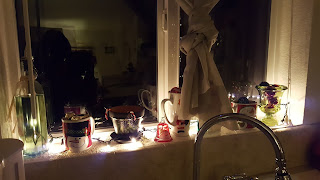 It must just boil down to the  cluttered feeling and needing to control my space.  It's been not a great year and I suspect that 2019 is not going to be much of an improvement.  Kevin is just relieved, because he is definitely the Once It's Done, Be Done guy.  I used to hold out until after New Year's Day. 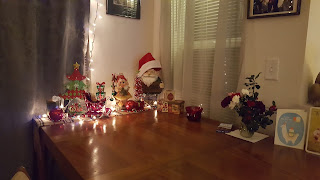 I did better this year with my ornament obsession. Not being able to shop on my birthday is honestly the only reason. And we bought the perfect tree this year so I was able to use all the ornaments.  Although, I was lacking in green ones  so I bought a set, okay-three sets- at Goodwill.  It's all about balance.

I have some snowmen decorations that I put out for January, just so the house doesn't look barren and sad.  Because reasons, I took them into work for that same purpose and now I have nothing.  Instead, I made a quick trip to the dollar store and bought some extra white, short-strand Christmas lights and some new candles.  It's still a little cheery for the dark days of January and February.

Also what happens every year is the intention to organize everything while putting it away.  Then I get tired and frustrated and don't do it.  This year, I am determined.  My winter break stretches into January instead of being solely in December so I've got the time.  Label maker and bubble wrap will be employed.  I will pack the closet according to need. For instance: Christmas cards easily accessed so I can ignore them until days before Christmas, as is tradition.

I din't decorate much this year - mainly just the tree. I just took all the ornaments off today. The tree will be put away at some point this weekend. I did a quick run through of ornaments, etc. prior to dressing the tree and just this afternoon went through all the boxes and was able to cull even more. I try to keep like with like in various boxes - it helps me to find what I'm looking for.