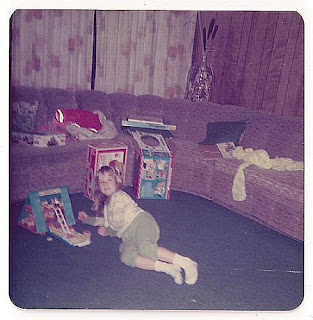 Last night as I was posting, I was reminded of a picture of my brothers and I at Christmas.
I looked through my album but it wasn't there. But in a serendipitous moment, I found this gem:

There are just so many things to look at in this picture!

I am five years old and not wearing my glasses. Those are clearly pajamas that I've outgrown but refused to give up. Also, my paternal grandmother made me pajamas every Christmas so perhaps my mom was trying to make the pajamas last. My guess is that I was stubborn though. (;-D


My most favorite present throughout my childhood was Fisher Price Little People. You can see I was in heaven with this house. As our neighbors have an A-frame house that I played in during the summer, you can imagine the awe and wonder! Also, I kept the box forever! Not only was I a little OCD as a child...I kept all the pieces in that box...it also had pictures of how it could be set-up and of other Fisher Price toys!

The red coat on the couch was a new winter coat, I think. It was red with fleece lining and a hood. Reflective tape had recently become popular and it had a band of it around the back, as you can see the shiny in the picture. I also think this coat replaced a fluorescent orange coat I had chosen and my mom hated. (apparently I had dreams of becoming a construction worker, I don't know)

We usually got a collective kid gift of a game and I think that's backgammon on the couch. I don't remember playing it much, but I was pretty little. My "younger" brother Gary built models but I don't remember that ship model. Also, as we were allowed firecrackers & such unsupervised, models and some toys didn't last long. (think "Sid" in Toy Story)

Let's see...what else? The wood paneling (real wood) is still there. The windows have been replaced but there are still windows there. They still have the glass water jug and I'm pretty sure still have the same cat tails.

The couch is long gone. While it was sturdy and huge, perfect for three kids, it was scratchy. Also, if you hit the cushions, dust would puff up in a nice little cloud. This was due to the cushion filling breakdown, not to my mom's housekeeping skills. It was also a huge tattletale if we were jumping on the cushions while my parents were (frequently) gone.

The throw pillows were a hideous, and again scratchy, avocado green floral pattern. They matched the two recliners my parents had. Oh the joy of 1970's decorating!

Have I mentioned that my parents still live there and bought the house in 1957?

Thank you for accompanying me down memory lane! I will see if I can find the picture I was *actually* looking for later!
Posted by Firegirl at 10:45 AM

Now I'm going to have to go dig out old Christmas photos...