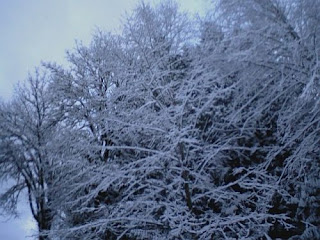 Snow in Western Washington is an Event. It is fairly normal that We get a few inches of snow Here, as we’re in the foothills and tucked against a small mountain. But today, nearly everyone was snowed in!

We got about four inches of snow Monday night. There was already ice underneath, so that’s fun to get around in. We woke up to snow this morning and now it’s after 8:00 pm and I think we have one foot of snow, all said & done. They are predicting a bit more tomorrow then again on Sunday. For the first time since 1990, we are looking at a White Christmas!!!

This Event is fine with me, of course, because I’m a second income and I was scheduled for vacation as of Friday anyway. However, this also keeps Kevin at home. An excavating company can’t do anything in the freezing and snowing weather. Yikes. That’s going to leave a mark! Oh well, I guess everyone is getting socks for Christmas this year. *shrug*

Kevin, for the most part, is bored so that equals Driving Me Crazy. Now, I couldn’t love him more if he were twins but Oh. My. God. Personal Space. (imagine me swinging my arms in a circular motion) It is difficult to write with interruptions from him & the dog. Or watch a movie..."whatcha watching?" or...whatevs. It's a good thing he's cute.

And, because I'm the last remaining human on earth with dial-up, the internet is putt-putt-slow. So that's fun. Not the day that I had planned, at all.

Meanwhile, I took some pictures with my trusty old camera, so I have to wait for them to be developed but I do have these that I took with my cell: 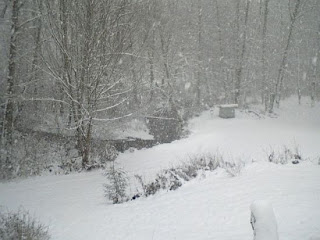 This is the view from our deck. Kevin took it because I'm not tall enough to peek over the deck railing without standing knee deep in the snow. 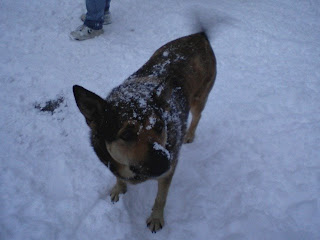 Missy Jo has been running around the neighborhood like a Kerazy Person playing in the snow. Check out the blur that is her tail. Apparently snow is crack in the dog world. 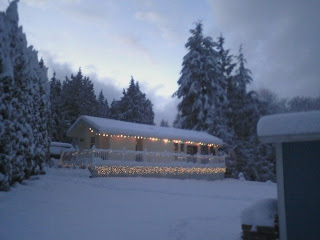 This is the In Laws cute little house. It looks like a postcard, doesn't it?

Stay tuned for more chapters in the Snow Day Chronicle. I may be posting for Bail Money soon...

Ha ha! I love the part about personal space!

It's so pretty! I'm so jealous.