Almost eight months ago, way back in September I had a haircut and I haven't touched my hair since.  Why? you ask.  Because a terrible thing happened.  I decided that I was going to cut the length off to just touching my shoulders.  I do this about once a decade and regret it every.single.time. But that wasn't the problem.

Once again, I came away from the stylist with Moe bangs.  They were so, so, SO SHORT. OMG. SO SHORT.  I'm not usually vain but this was embarrassing.  I have honestly not cut or trimmed my hair since September 2018.  My bangs didn't begin to really bother me until late January.  OMG. SO SHORT.  Think of what every single preschooler looks like when they cut their own hair.  That was me.

I asked my nieces who cuts their hair and gave her a call.  She is just wonderful.  Imagine the perfect hairdresser and she is it.  She is mid-60's, chatty, friendly, will tell you what to do without making you feel stupid.  She is Truvy without the accent.

More importantly, she has hair like I do.  I have baby hair; super fine and soft, and so much so that hair pretties will not stay in my hair without glue.  Braids are impossible.  She knows how to deal with that.  I've just turned fifty and she taught me like I was a teenager and I so appreciated it.  I was never the girl who really cared about hair.  Putting it into a ponytail is the most effort that I will give it.

Here's the other thing with my hair: I have cowlicks. Two of them.  Also, to turn the awkward level up to eleven, one side of my hair turns inward and the other side turns outward.  Because of this unmanageable state I've never really worn my hair any differently.  With the exception of the spiral perm days and when feathered wings were popular, neither of which are a good look if we're being honest.

Now instead of bangs that curl downward-ish, the bangs sweep to the left and the right kind of does whatever it wants to.  Sometimes it's really good and sometimes it isn't.  This is just the state of my hair and my patience on any given day.

Now I have to figure out how to not have our friend cut my hair anymore.  She still cuts Kevin's hair and does a good job with him, just no longer me.  I usually go with him because it's a Let's Do Errands and Have Lunch kind of thing.  This is awkward, super awkward.  I can use the excuse that I had someone else cut my hair for my brother's wedding but that will only last for a while.

We're friends on the facebook so she probably won't believe Kevin if he told her I'd been abducted by aliens. 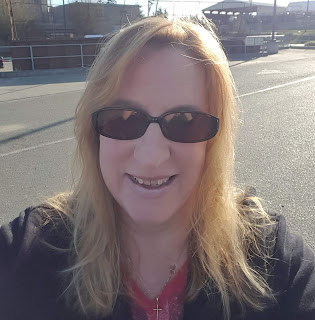 Switching hair stylists is The Most Awkward. I wish there were a way to do a Memory Wipe, so that the stylist would forget I EVER had my hair done by her.