So, I found this photo: 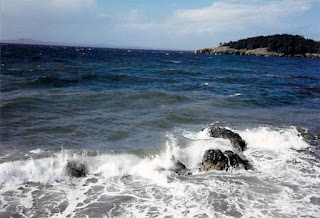 It was with a batch of photos from 1990, including with photos of the first new car I ever had, a park I used to go to on lunch break, and some others.  At first I was a little puzzled.  It's not a bad photo, not a great one.  I thought maybe it had just gotten separated from others.  It wasn't in an album, which should have given me a clue.

Then I remembered.  I took this in October 1990.  I had gone on a small road trip, just to disappear for a day.  This was before cell phones so that was actually possible.

I was just twenty-one years old.  Already had a failed marriage and was on the verge of losing my job because of it.  (you can't have a good work ethic when you're dealing with domestic violence, go figure)

I remember sitting in my little red car, in my favorite yellow OP hooded t-shirt, probably listening to Peter Gabriel or Don Henley. It was windy and cold, because October, but it was beautiful. I had driven out there not knowing what to do and drove back with a decision.  No plan at all, because hi, it's me, but a decision.   Just that decision was enough, because it was going to change everything.

Thank you twenty-one-year-old Surely for taking the photograph and keeping it all these years.  I don't think I will ever be 100% comfortable with that decision but here we are.  At least looking at the photo, I can remember what it felt like and appreciate the weight and consequence of it.