In today's episode of What Did Surely Take Apart Now? Our dining table.

We used to have a big IKEA table but it was too big for the space in this little house.  So I searched online for a table because I can't justify buying new when someone has a perfectly good table out there.

About two years ago I found an oak table that I liked.  We were going to buy some parts for the big truck so I made arrangements to buy this table at the same time.

Well, as happens on online ads, it wasn't quite in as good of shape as advertised.  But it seemed good enough.  It seemed redeemable.  Once we got it home, I scrubbed and polished it but that only showed some wear spots that we didn't see and/or were covered by polish.  Frustrating but it was $25 so no complaining. 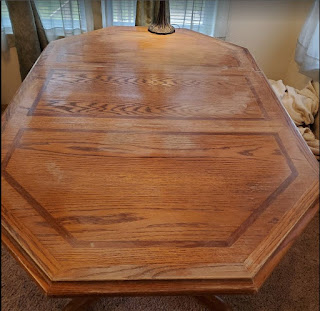 Fast forward two years because these things aren't important to me and now I have time on my hands.  You can probably see where this is going.

Now, this is where I say that one of my BFF's is a carpenter. A really good carpenter.  What I SHOULD have done is asked them to refinish it.  What I did instead was ask for instructions and I did it myself.  Anyone who knows me in real just thought "Oh.no."

This morning I took the list of needed items to the hardware store.  The guy helped me get all.the.things and after taking Lucy for a quick run, I started this project.  I had mentioned to Kevin that I was going to work on this "this week" but all he knows is that I went to the hardware store this morning.  I am SUPER FUN to be married to.

Finally I started to stain the table.  Now, I watched the youtube also before starting this so when I saw something happening, I knew I was hooped.  It started to blotch.  This means that something is wrong.  The solution? Start over.  Like all the way over. 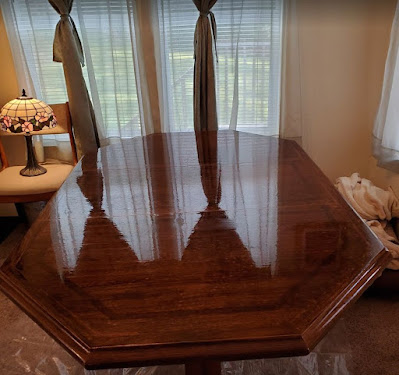 All I could do is laugh.  I mean, I'm out a few bucks and some hours.  Even blotchy it looks better than it did.  We need new chairs anyway so now it's a table too. This is so on brand for March and This Year that we are having.

Not to be thwarted, I did some online searching when I was supposed to be working.  I realized/discovered that in my alphabet brain, I had forgotten a step.  Of COURSE I did.  I stopped "working" and went back out to the table.

Oh, did I mention that it's heavy and awkward so I left it in the house? No?  Oh well, I did and yeah. I continually make good choices.  I put a drop cloth down so the carpet is saved.  I did have to break out some paint for some overspray.  But that wall needed touching up anyway.

I wiped the table down with a rag and the blotchy mostly went away.  Mostly. What had happened was when it started to blotch, my brain spun out and I forgot that I still had one step to finish.  It still looks not great; some of the spots are still visible but I maintain that it is better than before.

Kevin phoned in the middle of the project and I reluctantly told him what I'd done.  Not surprised, he just asked how it looked. "Not bad..." I said.  He replies "Not bad? That was what you were going for?" It made me laugh.

It takes up to 24 hours to dry and I have two hours left.  We'll see.  My confidence level is pretty low.  There are dry spots showing and that's frustrating.  I will look at that over the weekend because in my Surely-like fashion, I'm bored with this project now.  I maintain that it still looks better than when I began.

Last night, Kevin agreed that it wasn't terrible.  "Now I know I can do that." I mentioned to him.

In his lovingly sarcastic way, he says "Do you? Can you say that?" 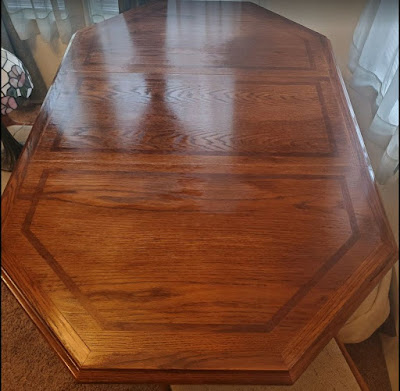 Well, Kevin can tease, but I for one am AMAZED. It looks GREAT!!

Well, I think it looks amazing!!!

It's a work in progress, for sure. Even though I want to be done with it, I know that I am not.

And Kevin is impressed, he just has a different love language than most human beings. :)

I think it looks great.