From the Casino Collection

Kevin was putting up Christmas lights over the holiday.  While doing so, he noticed a broken (and dirty, if I'm being honest) blind next to my side of the bed.  Perhaps a little impulsively, he took it down and broke the bracket in the process.

His intentions were good and not a big deal in the grand scheme of things. But it's been cold and it took away a little barrier to said cold.  Also, there are only sheer curtains on the windows because I'm just not a fan of drapes. That being said, the sheer curtains kinda no longer matched since we had new carpet, etc.  Still none of this is an emergency, per se. 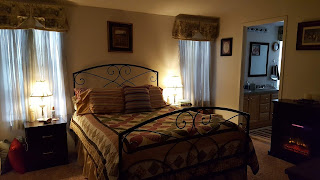 So, like you do, I went on Amazon to see if there were any inexpensive curtains that I would just make do with.  Normally, I would just go to the second-hand store but I knew that wasn't going to be a one try and done thing.

And I have to say I did this via my phone instead of the laptop.

You're probably guessing where this is going.

I order a pair of curtains, knowing that I would use a panel on each window.  And I would figure it out later.

And yes: they sell blinds every day. Shush.


They arrived within the next two days.  I opened the box and I was all "holy.mother.of.CaesersPalace."

I had noticed that there was a pattern in the photo and didn't worry about it.  I should have worried.  NOR did I thoroughly read the description.

This is where I say "At least I'm getting a good story out of it."

I left them in the package, on the counter, and tried to not make eye contact with my mistake.  Then I banished them out-of-sight into my office.  They were super inexpensive so I was weighing the "How important is it to send them back" option.

Suddenly it occurred to me that perhaps I could hang them with the reverse side out.  Reluctantly, I unpackaged them and laid them on the bed.  It's a doable solution but not a permanent solution.  Not only does the color not match the photo, the color on the reverse side is like a non-color.  I would name it "BLAND."  Or "Nothing"

AND, as you can see: there is a hem/trim where you can still see the shiny.
AND, when the sun shines through the window - as it tends to do - you can see the PATTERNS.

For the gloriousness of it, here is the Amazon provided close-up 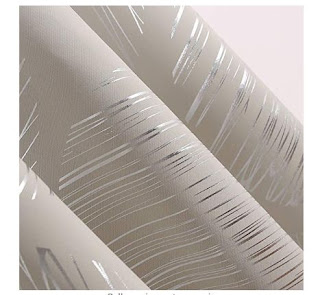 Here is what it looks like this morning. Believe it or not, it's daylight outside.
Also, I put the Christmas lights on the bedframe prior to this debacle. Unfortunately, but not surprisingly, it makes it worse in this photo.

This is a great inspiring article.I am pretty much pleased with your good work.You put really very helpful information... 바카라사이트