For Christmas, Kevin gave me a new medicine cabinet for our bathroom.  We've been slow-rolling a remod in there and this is one of the last pieces before changing the actual cabinetry.

He was taking apart the old one about thirty-seconds after I got dressed this morning.  The amount of times I think "Oh, okay, we're doing this now" is probably in the hundreds.

The original medicine cabinet was what my friend calls "Picture wood", which is just cheap laminate over pressboard.  When we moved into this house is when we realized that we didn't have a cabinet. I bought one on the cheap, with the intention of replacing it sooner rather than later. Fifteen years ago.

I am pretty good at going through things medicinal and tossing them once expiration dates are passed.  This is where I say that mostly Kevin's stuff is in the cabinet.  I have a different organizational system, for those of you who just went "Wait, what?"  And I'm not tall so my stuff is in a lower cabinet.

On the top shelf was cologne.  He doesn't wear cologne. In fact, I can't remember the last time that he did.  He set them aside with the stuff, as if to indicate that it could go into the new cabinet.

This is how that went:

"So you're saying throw it away."

To which, welcome to my brain - apologies for the broken wires - I tell you that I didn't seal the paint can up well enough on the last painting adventure.  Guess who needed paint before installing the medicine cabinet.  THIS GIRL.  After a quick text to a friend who would know how to remedy such things, we made do without it.  And this is why turpentine was in my head.  Because who knows that word anymore?  I do.

What were we talking about, again? Oh, cologne.

So, yes.  We did not put the bottle of BRUT back into the cabinet. 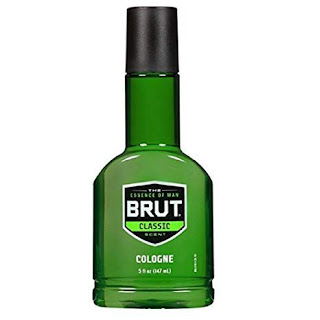 There were also two bottles of Old Spice because that is a requirement for all males in the United States.  I don't mind the smell of Old Spice so I kept one and threw out the other.

Finally, you might have guessed what was next.  Yep, Drakkar Noir.  Because it was the 90's.
There was not one second of hesitation in tossing that bottle. While it was cool back then, now it's just a bad internet meme. 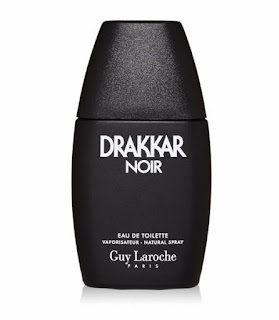 Oh, and while doing so, Kevin remembered that he had stopped wearing it because HIS BROTHER BOUGHT SOME TOO AND WORE IT.  I had somehow blocked that out of my long-term memory.

So, this is where I say that I've become a little too diligent about recycling.  In this case, a lot too diligent.  Old Spice is in a ceramic bottle so it had to go into the regular garbage.  Drakkar also went into the garbage because it is required by law. Probably.

But the Brut. Who would have guessed that it came in a recyclable plastic bottle?  It did.

Without thinking, which those words really should be on my tombstone, I poured it down the sink.

Yeah. I am a genius.

Kevin happened to walk through the kitchen was all "RUN SOME WATER!!!!!"

Now our house smelled like an 1985 bar for the rest of the day.

And guess what asthma doesn't enjoy?  BRUT.  That seems right, like the body's natural defenses coming to protect me from my own stupidity.