It's Been A Long Week - A Story

I'm trying to decide where to begin this story...it's another parent story so there's a few layers.

I'll start with a listicle:

Brother-in-law's dog has a kidney infection.  I hate this dog.  It's mean to Lucy.

This dog is ill-behaved and not disciplined and has to be babysat by the in-laws during the day.

Parents continue to dare COVID to come get them. F-i-l took their dog to the groomer. The groomer.

As documented, I spun out a little on Monday. This contributed to said spin-out.

Now I heard that the parents had left in the morning, while I was working.  I can hear their van from my office.  I didn't think much about it.  Because: working.

A few hours later, my mother-in-law phones and she is upset.  My f-i-l hadn't returned yet.  Now I'm thinking it's because something is wrong.  Nope, the groomer is taking a long time.

No, she's upset because the dog I hate has been stuck in my brother-in-law's house for hours and she is convinced that it will get sick again.  She wants me to go let it out of the house.

The dog I hate.

The dog that is ill-behaved and not trained. (boxer breed)

I expressed hesitation and doubts because of all of the above.  I said: "If something happens to that dog when I let it out, it will 100% be my fault."  She flusters.  "She'll behave.  She'll just run up here to the house."  I'm still saying no and trying to figure out how to solve this at the same time.

She then says that someone is calling her.  I told her to answer it and hung up on her. (a little happily, I admit)   I then phoned Kevin, who doesn't answer.  This isn't unusual because he's busy.  So I waited.

My phone rings and it's Kevin.  I took a guess and asked "Have you talked to your mom in the last five minutes?"  Yes and now he's wound up. Another list is needed:

But he's upset that his mom is upset

He's annoyed/pissed that his dad is at the groomer

He's annoyed/pissed that his brother can't get his sh*t together and take care of his own dog.

He's a tiny bit annoyed/pissed that I didn't want to go down there.  But understands why.

"Please go down there.  If the dog takes off, then so be it.  It's not worth upsetting Mom."

Put on my shoes and have to tell Lucy she can't go because "I'm going to help that dumb dog who is mean to you.  You get to stay cozy on the bed."  She is not happy. Stand in line, dog.

Walk over there and down the sketchy stairs to their house. No key.  Door is locked. Because why not.

I phoned Kevin and asked him if he knew where the key was.  He did not.  He uses his other phone to phone his dad and I hear:

"Surely is at the house to let out the damn dog.  Where is the key?"

He hangs up from his dad and there's a beat of silence.  "Go home. You heard all that."

I'm already walking up the stairs and across the yard.  I didn't even look into the parents window because I could not guarantee not to flip off an eighty-year-old woman.

Later that day I posted a meme on the facebook.  Later that night, I noticed the comment from my m-i-l: 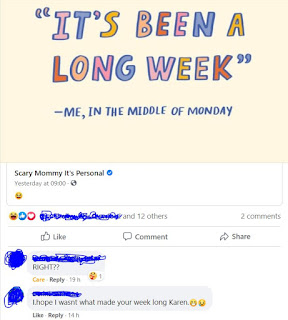 At least I know her internet is working.