So, I have a bunch of unfinished drafts in my folder again.  I'm just going to toss them here, all in one post.

Do you want to hear about

How I fell (again) on the outside stairs (again) and most likely broke my tailbone?  AFTER reminding myself that the stairs were slick and I fell last time?

How when I asked my m-i-l if she wanted me to pick up pizza for her for Monday Night Football (#GoHawks) and she said no because my f-i-l is picking up chicken. BUT she'd like to have it for Tomorrow Night?

How I took Lucy for walkies TWICE in three days in my truck; leaving it in an unholy mess that took an hour to clean? And now it smells like the Stratosphere in Las Vegas?

How Kevin keeps getting spam calls and keeps worrying about it every.single.time EVEN THOUGH I've explained it to him ELEVENTY times that folks seeking legal action don't use automated- sounds like it was recorded on a phonograph - messages to your voicemail.  Oh, and STOP ANSWERING THE DAMN CALLS.  It shows your phone as an active phone and the cycle continues.  Just STAHP, ftlog.

How my mother said "We're going to see how it goes" in response to them having ten people in her tiny house for Thanksgiving?  To which I said "It could turn out that someone gets sick and dies alone in a hospital."

How a few months ago I got hilariously called out on social media by our tuner friend to a national television announcer, as a stalker? 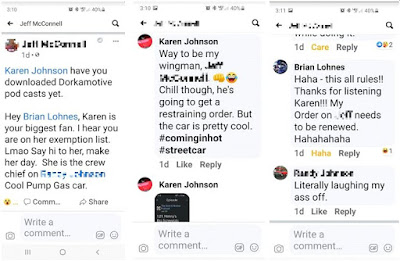 How I discovered that we needed a new oven by serving half-baked - at best - cornbread, after complaining that the oven didn't work when it burnt another dinner nearly beyond recognition.  No, it wasn't me This TIME.
How I asked our new coffee friend if she had hats (for sale) and she was all "Umm, yeah, I have a cat..."
like I was some kind of weirdo, clairvoyant, cat lady.  Making me laugh until I'm crying and trying to do the ASL sign for hat to clarify, which was not helpful at all.
How the IRS website says that Kevin doesn't exist and the only way to prove it is to send a form with his actual drivers license to them?  I mean, what could possibly go wrong there?  Oh, and there is literally a section that says "Do you REALLY need a new card?  Really?"
And then how I found a $16.42 refund check at the bottom of the desk, underneath the drawers while looking for the social security card?  And that: big surprise, I hoard envelopes.  AND that it occurred to me to look under the drawers at 2:00 in the morning and it took everything in me to resist not getting up to disassemble my desk?  (P.S. it wasn't there either)
Okay, now I feel better.  And the drafts folder is a little lighter.

Omg great brain dump! I look forward to reading more about your IRS travails (sigh, yes I am a grown up, apparently).